Cricket
News
Kohli, while at the crease in Ahmedabad, proved he was the best batsman on the planet once again
Simon Lillicrap
17:55, 14 Mar 2021

England came up short in the second T20I match v India, losing by seven wickets as Virat Kohli proved once again he is the king of chasing down totals in this form of cricket. Kohli, who hit 73 off 49 balls, was the centre of attention once again having been dropped on ten by Jos Buttler before being given the benefit of the doubt by the officials when it seemed like he had been stumped late on.

That decision drew fury from the England fans watching on, while even the commentary team believed he should have been given out, after a review by the third umpire. Buttler was on his toes to catch out Kohli, who appeared not to have left any of his foot behind the line, but It was shown up on the big screen as not out, a decision which thrilled the home crowd. In truth that decision wouldn’t have affected the result of the game, India won with plenty of balls and wickets in hand, but it is important for the integrity of the game to be upheld, even against the game’s greatest players. 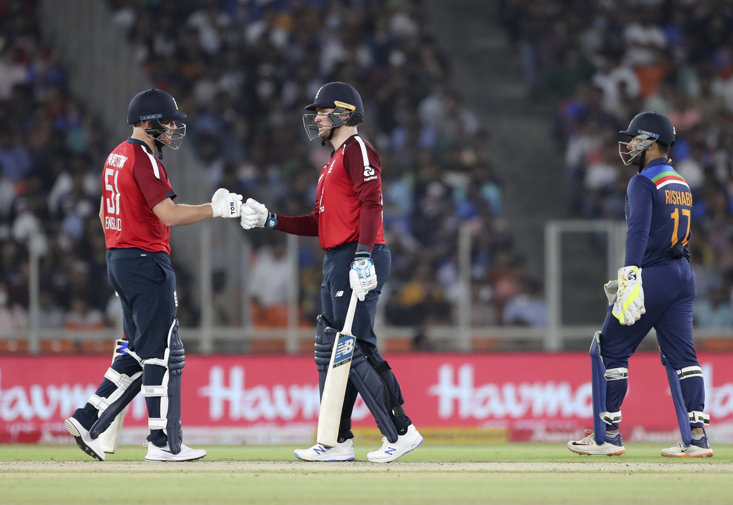 Captain Kohli, while at the crease, proved he was the best batsman on the planet once again, and the statistics support the great man. His Test average is 52.37, his ODI average is 59.31 and his T20I average is now 50.86 - the only man in the world to average above 50 in all three formats. Absolutely ridiculous figures. In the T20I game, he now holds the record for the most runs (3001), most fours, highest average and the most fifties, bringing up his 26th half century v England. Oh, and of course he won the game with a six.

Meanwhile, Ishan Kishan hit a half century for the hosts on his international debut as India chased down England’s total of 164. It wasn't a bad display with the bat for the visitors as Jason Roy top scored with 46 off 35 balls, while David Malan, Jonny Bairstow, Eoin Morgan and Ben Stokes lost their wicket in the 20s after some generous Indian fielding. Buttler’s duck proved to be the only real disappointment on the day as the top two ranked sides in the world put on another thrilling contest. 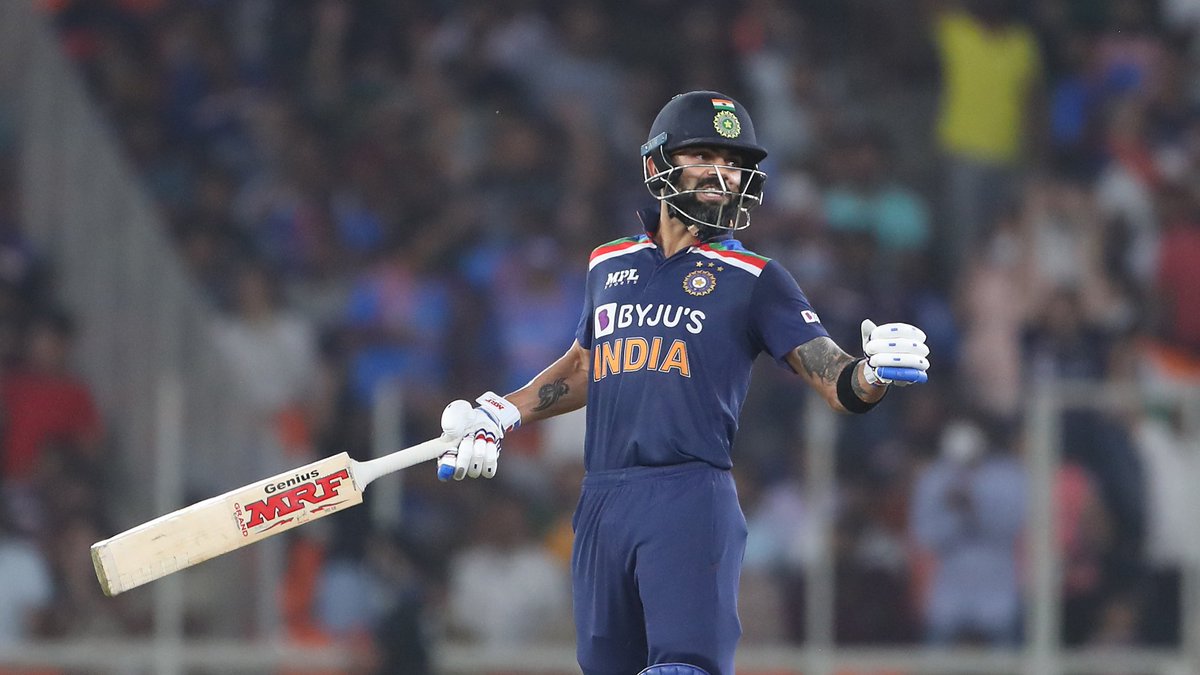 Often when England lose, especially after the way they won the first T20I game, there can be an inquest into their performance. However, sometimes, especially in the short format of the game, you simply have to hold your hands up and admit India were the better team on the day. England started well with the ball, as Sam Curran took the wicket of KL Rahul with the final ball of the first over and looked to have a real chance of victory with the hosts on 0-1.

However, with some excellent batting performances from Kishan and Kohli, the hosts quickly moved onto 96 runs before they lost their next wicket. The India captain then dragged his side through to the finish as England’s bowlers failed to mount any consistent pressure on those in the middle. And so, it proved to be a game of fine margins for England, as India levelled the series 1-1 heading into the third match on Thursday, but ultimately, Virat Kohli was the difference maker once again.

x
Suggested Searches:
Manchester United
Liverpool
Manchester City
Marcus Rashford
Premier League
More
cricket
Double King Or Old News? England & Morgan Face Moment Of Truth...
Oh, how quickly sport moves. As England approach their first major white-ball tournament since that [ ... ]
cricket
Moeen Ali Retires From Test Cricket Having Broken Down Barriers...
After 64 matches, five centuries and 195 wickets, Moeen Ali has called time on his England Test career [ ... ]
cricket
England's All Too Predictable Batting Collapse Costs Them Test...
Another inevitable England batting collapse. On a strangely sunny Monday morning in early September, [ ... ]
cricket
Consistency Now Key As England Look To Repeat Headingley Heroics
“Just when I thought I was out, they pull me back in…” There was a moment there where [ ... ]
cricket
England's New Look Line-Up Already On The Back Foot As India...
In the week that saw Lord Ian Botham appointed trade envoy to Australia, England’s current crop [ ... ]
cricket
Without Everyone Playing Their Part, England's Cricketing Struggles...
Former England Test cricket bowler Ryan Sidebottom believes England can enjoy success again if the whole [ ... ]
cricket
England's Batting Line-Up Is Shoddy, But The Lack Of Depth Is...
An Englishman with a bat in front of three sticks of wood has now become as nervy of a spectacle as [ ... ]
cricket
England's Final Day Defeat To India Was Inevitable, And Root...
A disaster. A shambles. An embarrassment. Several words have been used to describe England’s fifth [ ... ]
cricket
Rain And Root Deny India, But England Can't Keep Relying On...
In the end, the rain finished off the job Joe Root had started. The First Test between England and India [ ... ]
cricket
The Greatest Test Match: England's 2005 Edgbaston Ashes Win...
It felt like the peak of Test cricket at the time. Arguably, it remains the greatest ever game in the [ ... ]
cricket
Time For Joe Root's England To Find Some Consistency - Sidebottom
Former England Test bowler Ryan Sidebottom insists that Joe Root’s side must turn in a stirring [ ... ]
cricket
Ben Stokes' Break From Cricket Highlights The Strides Made On...
It is a truly wonderful thing that Ben Stokes will not be in England’s Test squad to face India [ ... ]
cricket
Ryan Sidebottom: England's T20 Hopes Have Received A Huge Boost...
We’ve seen the likes of Jonny Bairstow, Ben Duckett and James Vince flashing the bat to great [ ... ]
cricket
Ryan Sidebottom: The Hundred Is ''Off To A Great Start'' After...
Ryan Sidebottom believes cricket's divisive new tournament 'The Hundred' proved [ ... ]
cricket
Ryan Sidebottom: Why The Hundred Is A Game Changer For Women's...
For women in particular, The Hundred is huge. Ahead of the first ball being bowled it has had its doubters [ ... ]
cricket
England Can Dream Of Another World Cup Win, Two Years On From...
“By the barest of all margins.” The inimitable Ian Smith couldn’t have summed it up [ ... ]
cricket
The Newcomers Looking To Help Fire England To An ODI Win Against...
An inexperienced England are facing a huge test as they have been forced to name a brand new 18-man [ ... ]
cricket
Perennial Finalists New Zealand Finally Come Good To Win World...
New Zealand finally got the job done. In 2015 they were the entertainers of the tournament at the Cricket [ ... ]
cricket
Sophia Dunkley Is England's Newest Cricketing Icon That Can...
Sophia Dunkley is a history maker. She became the first black woman to play Test cricket for England’s [ ... ]
cricket
ECB Right To Suspend Ollie Robinson As Cricket Looks To Learn...
Culture Secretary Oliver Dowden joined a number of outspoken critics of the ECB’s suspension of [ ... ]
cricket
New Zealand Bring Desire, England Are Just Dire As First Test...
When New Zealand could have batted for a draw, they went hell for leather on the final day at Lord’s. [ ... ]
cricket
''I Can Still Improve'' Jimmy Anderson Part Of Resurgent Older...
Whisky. Fine wine. Jimmy Anderson. Just three things that get better with age. England’s highest [ ... ]
cricket
World's Best Cricketer Ben Stokes Has Become England's Imperfect...
If there is one thing the British public love more than an underdog story, it is a tale of redemption. [ ... ]
cricket
England Just Fall Short Against India Despite Sam Curran Heroics...
England came up short against India, losing by just seven runs in an absolutely thrilling ODI decider [ ... ]
cricket
England’s Aggressive Batting Pays Off As Bairstow And Stokes...
When England’s top three bat like this, there is simply no side in the world that can stop them. [ ... ]
cricket
Three Years On, Steve Smith Deserves Big Praise For His Response...
On this day three years ago the entire sporting world collapsed on Steve Smith’s shoulders. In [ ... ]
cricket
Root's Calm Head Missed As England Collapse To 66-Run ODI Loss...
India have defeated England by 66 runs in the first one-day international in a game that will once again [ ... ]
cricket
India T20 Win Over England Could Be Perfect Precursor To 2021...
England have lost the T20 series in India 3-2 having been comprehensively beaten in the final match. [ ... ]
cricket
Blistering Buttler Leads England To Bounce-Back T20 Win Over...
England showed their resilient side on Tuesday as they bounced back from Sunday’s defeat in the [ ... ]
cricket
Archer And Roy Star As England Sweep India Aside In Opening...
England began Twenty20 World Cup year in emphatic fashion as they hammered India by eight wickets in [ ... ]