Football
News
The Tottenham star has fought his way back but his team are staring at a quick exit
Kris Voakes
15:01, 28 Nov 2022

It was on November 1 that Son Heung-min fractured his eye socket, playing for Tottenham Hotspur against Marseille. South Korea, a nation which has a nightly TV show called ‘Super Son Time’ tracking the player’s exploits, was living on its nerve ends as it awaited his prognosis.

Son’s surgery was national news, his potential return in time for the World Cup discussed on an hourly basis. When he began training with his Korea Republic teammates a couple of weeks later he did so wearing a protective face mask, and as he lined up for their opening Group H fixture against Uruguay he was serenaded by thousands of fans donning similar shields.

But just four days on from his speedy return to competitive football, his South Korea side are staring down the barrel of an early exit from the World Cup after their dramatic 3-2 defeat to Ghana. With group favourites Portugal to play, the Taegeuk Warriors need to pull off a shock win in their final pool game and hope for favours elsewhere if Son’s expedited comeback is going to have been worth the bother.

Despite being the team with most of the possession, a bag-load of corners and much of the verve in the first half, they were two down at the break as their fallibilities at the back were punished by the Black Stars.

First up, Kim Min-jae failed to deal with a Jordan Ayew free-kick from the left and Mohammed Salisu swung a left-foot shot beyond Kim Seung-gyu from close range. While the ball struck Andre Ayew from Kim’s misdirected header, it clearly was nothing of the Ghanaian’s doing.

And before long they were two up, Jordan Ayew’s brilliant in-swinging cross from the left leaving Mohammed Kudus with the job of getting the slightest of glances onto the ball to score. 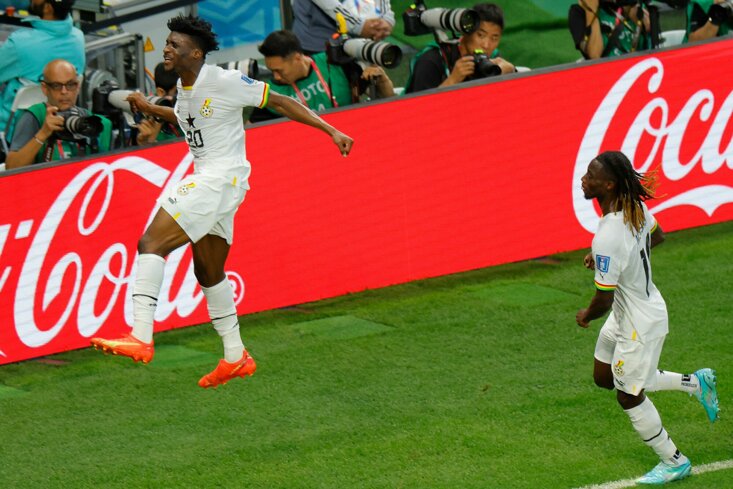 Korea needed a hero after the interval, but far from Son being the man of the hour it was Cho Gue-sung who looked to have rescued them with two superb headers in the space of three minutes. Tariq Lamptey was dispossessed on the left by Lee Kang-in, who sent in a beauty of a cross for Cho to stoop and head home with aplomb.

Within the blink of an eye he had another, burying Kim Jun-su’s excellent stand-up cross with a bullet header from a fine jump. The vast block of fans in red went crazy, truly believing the much-awaited tournament had something special in store for them.

But their optimism lasted just seven minutes before Kudus grabbed a second, slotting home after Inaki Williams’ wild swing at Giedon Mensah’s low cross had seen the ball travel all the way to the far post.

It was fair reward for Ghana in many ways. It was they who took their chances with greater frequency. The Black Stars were a better team unit, Korea the ones looking for moments of inspiration from their one superstar for too much of the game. When they got great deliveries in, Cho did the job for them, but they soon stopped doing that after his three minutes of magic.

Son had two chances to find the net late in the game but on both occasions saw shots blocked as his finishing move of cutting in for a right-foot shot was easily repelled by hard-working Ghana defenders. There was to be no storybook ending for probably the greatest Asian player of all time.

He’ll need to be at his very best against Portugal if his battle for fitness is going to be anything other than futile. A nation which spent weeks worrying about the participation of their star man now have four days to fret over their whole team’s World Cup future.