Kyren Wilson admitted that playing a first tournament overseas for the tour for two years at the German Masters proved to be a bitter-sweet experience.The 30-year-old from Kettering won the event three years ago and this is the first time the tour has left the UK since the Covid pandemic broke out.

But the event at the Tempodrom in Berlin was the brainchild and legacy of former World Snooker director and Wilson’s ex-manager Brandon Parker who died in 2020.World No5 Wilson reached the second round on Wednesday with a 5-1 win over Jimmy Robertson – closing out the contest with impressive breaks of 94 and 117.

He said: “The last time actually I played here back in 2019 I won it and lifted the trophy, because I failed to qualify the year after, losing to Zhao Xintong - and then it was staged in the UK 12 months ago.

“So of course walking out there today that brought back a lot of very good memories from my win here, I felt that as soon as I walked in.But at the same time this for all the players is very much Brandon’s tournament, who is very sadly missed and walking into the building for me without him was strange.

“There is a dressing room in the players’ lounge where I remember him, me and my brother sitting and talking about things to work and focus on in the final three years ago.

“As I was putting on my bow tie today in that same room it almost brought a tear to my eye that he is not here, it really hit home. The event has him written all over it…loud, boisterous and extravagant. We are lucky to have a venue like this on the tour, and it is great for the tour though that we are back in Berlin.

“We are all so out of practice travelling abroad, it was strange getting back on to a plane – and also getting stuff out of a suitcase and reacquainting myself with an iron.For the last two years I have just had all my clothes in a suit carrier in the car, but this time I had to iron everything again in the hotel room. That felt weird!

“Things are a bit different here this year with all the Covid passes, you need this and you need that at the airport – but it wasn’t too bad and actually could have been more stressful. 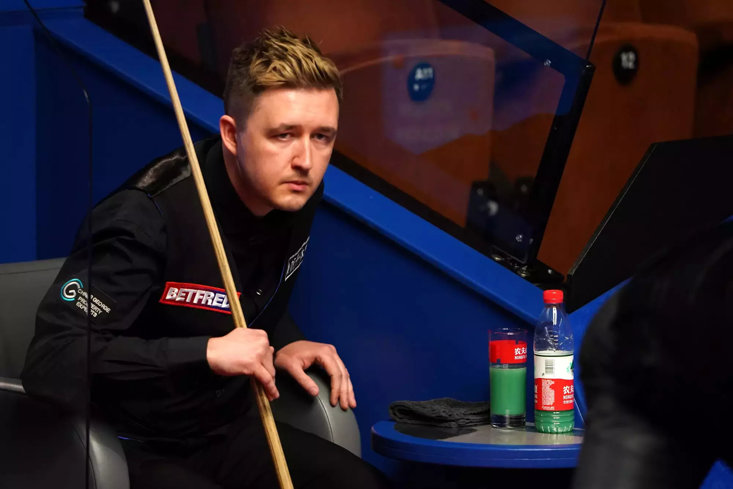 “So for the players that weren’t as lucky as myself and had previously got away on holiday and experienced some of this, that was a relief for them.It is a sign of the changes in the world with Covid - even going into shops you have to prove you have been double vaccinated, as well as bars and restaurants.

“In the match, at 3-1 at the interval I knew I could quite easily have been 2-2, and the odd mistake was creeping in. You need to settle here in the arena because it is a unique set-up.

“It is just very different with the way the tables are laid out. And in the interval I had a chat with my brother, and came out relaxed and focused and got the two big breaks to close out the match.”

Recent UK Championship winner Zhao Xintong was too strong for two-time champion Mark Williams – running out a 5-3 winner.The 24-year-old, who shot up to No9 in the rankings after his York success, made breaks of 64, 72, 89 and 70 to see off the 46-year-old Williams.

Zhao said: “I am really happy, Mark Williams is my favourite player and he played well today. The important frame was the seventh one at 3-3, because he was in first and had a good chance, and I was able to win it and go 4-3 up.

“Mark and Ronnie O’Sullivan were the players that inspired me as a young boy. And it was good to be out there on the main table in such a big arena. Hopefully we will also have some big tournaments back in China too later this year.”

Scotland’s Anthony McGill crashed out 5-2 to Zhou Yuelong, who at 24 is looking to become the latest youngster from China to win a major title.

World No14 McGill, 30, said: “My standard was pretty poor and he was much better, so it was a fair result. It would have been nice to go further as it is a nice arena, but it wasn’t to be.

“To be honest my game is rubbish right now and I need to put in a lot of work to try and be ready for the World Championship in a couple of months.”