Us Sports
News
Paul George scored a play-off career high 41 points to help give his side a glimmer of hope in the Western Conference finals
Gary Maiden
15:21, 29 Jun 2021

The Los Angeles Clippers kept their hopes of a first ever NBA finals appearance alive with a 116-102 victory over the Phoenix Suns in Arizona.

Trailing 3-1 in the Western Conference finals and just one defeat away from handing the series to their opponents, the Clippers stepped up when it mattered most to give themselves a chance of levelling the series on home soil in game six.

Phoenix had been as short as 1/30 to book their spot in the NBA finals for the first time since 1993, but Monty Williams’ men are now a 1/6 shot, with the Clippers available at 4/1.

The Californian outfit owed their victory in part to the impressive Paul George, who scored a play-off career high 41 points against seven different Suns defenders to earn a congratulatory line of high fives as he took to the bench with a little over a minute remaining.

With just seven points separating the sides heading into the third quarter, George took matters into his own hands with 20 of his 41 points coming before the start of the fourth. 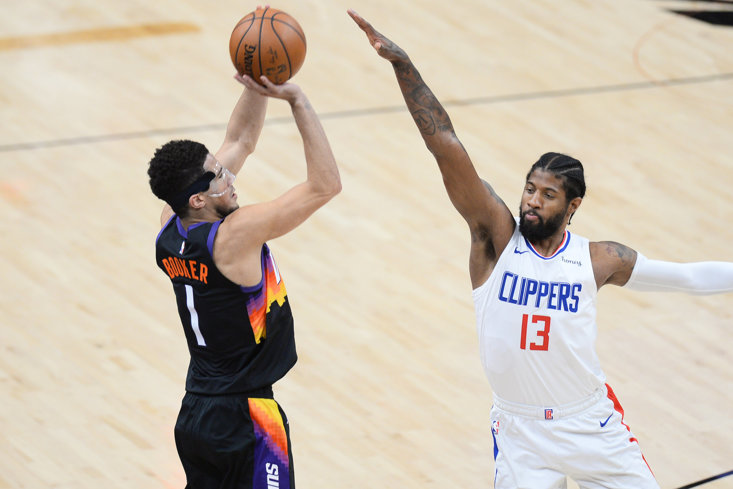 Reggie Jackson was on form with a supporting 23 points, while Marcus Morris and DeMarcus Cousins added 22 and 15 respectively. However, the headlines belonged to George, who seemed confident ahead of Thursday’s game six on home soil.

“We fight, we're scrappy, we leave everything on the line and we do it together,” boasted a confident George, who knows that a similar showing at the Staples Center next time out would level the series.

“That’s the most important thing – we do it together.”

Clippers head coach Tyronn Lue agreed with his star man, and praised the togetherness of his squad as they kept their finals dreams alive.

“All season long we’ve been down guys, guys have been out, different guys have been stepping up and playing well,” said the former Cleveland Cavaliers coach.

“I keep saying this group is resilient, but this group really is. We're a good team no matter who's on the floor. Now we've got to do it again two more times.”

At 3-1 up and needing a win in their own Phoenix Suns Arena, the general feeling around the Arizona camp was once of understandable confidence.

However, a clearly frustrated Williams suggested that his players need to find a bit of fight from within if they are going to avoid throwing away a seemingly unassailable lead.

“It was pretty obvious that we can't play with a 'show up' mentality,” said the 49-year-old.

“We showed up in the first quarter, and they played with desperation. The desperation has to be there. You can't just show up and expect them to give it to you.”

You get the feeling that there will be one or two more twists and turns yet in this series, with the eventual winner facing the Eastern Conference champions with the Milwaukee Bucks leading Atlanta Hawks 2-1.