FIFA has released its World XI with the 23-man squad featuring some of the world’s best stars - among some absolutely baffling choices. Starting with goalkeepers, Alisson Becker is joined by Edouard Mendy and Gianluigi Donnarumma. They are unquestionably three of the best keepers in world football, with Mendy particularly impressive with his defensive records in the Premier League and Champions League. So far so good right?

The defender's shortlist has six full-backs dominating the list with only Leonardo Bonucci and Ruben Dias making an appearance as centre-backs, something difficult to argue with other than the quantity.

On the right side, Trent Alexander-Arnold is joined by 38-year-old Dani Alves, a bemusing choice for a man of such an age who left Sao Paulo, his boyhood club, due to unpaid image rights in the summer to return to his former home of Barcelona. He makes his way in the side in the place of the likes of Reece James and Joao Cancelo with seemingly no explanation or recognition for two of Europe's finest right-backs.

Jordi Alba and David Alaba make up the left side. The big debate following the Euro 2020 final was a vicious back-and-forth between the finalists, with English and Italian football fans battling for either Luke Shaw or Leonardo Spinazzola to be crowned as Football Twitter’s greatest left-back. Andy Robertson can feel hard done by in the conversation as well. Surely either of the three could credibly be chosen in place of either left-back.

The midfield starts okay. Champions League winners N’Golo Kante and Jorginho and Premier League winner Kevin De Bruyne make up the top of the list. Bruno Fernandes could be considered a bit of a stretch given his performances so far in the 2021/22 season, but his early year form was among the best. 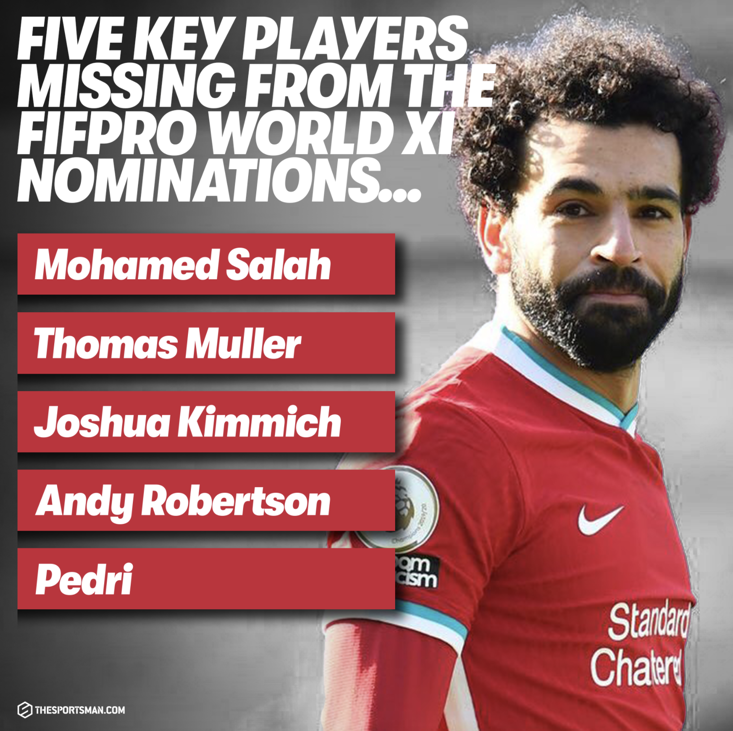 Somehow, more Barcelona players find their way into the list. Frenkie de Jong and Sergio Busquets are named over the likes of Joshua Kimmich, Fabinho, Thomas Muller, Marco Verratti, Nicolo Barella. The list of midfielders that have been snubbed is truly endless. With Busquets and Alves, this team seems more like a La Liga team of the season from 2012 rather than a list of modern footballers earning praise for their showings in the last 12 months. Of all the Barcelona midfielders to pick for a star-studded selection of the best players, the Kopa award-winning Pedri was even ignored, which is nothing but confusing.

Finally, onto the forwards. Neymar is the first eyebrow-raising choice, with the Brazilian making just 21 league appearances in the calendar year. The usual suspects of Karim Benzema, Robert Lewandowski, Lionel Messi and Cristiano Ronaldo also make their way onto the list, with Kylian Mbappe, Erling Haaland and Romelu Lukaku following.

All of these forwards deserve the praise to be ranked as the finest strikers in football, but there is one giant red-shirt wearing Egyptian missing from this list. Mo Salah’s form in the 2021/22 season has been nothing but electric. With an average of a goal involvement every 63 minutes, if he was to play the same amount of games as last season, he would finish this season with 66 goal involvements, which is unattainable to pretty much every other player in world football right now.

It’s truly baffling to see him excluded from a squad that sees players who have been instrumental in their own club’s downfall picked alongside others who barely manage to play for more than half a season of games.

On the whole, out of the 30-man shortlist for the Ballon d’Or - the award that ranks the best players in world football - 14 of them missed out on the squad. As Wrexham co-owner Ryan Reynolds once said in 2006’s Smokin’ Aces: “Make it make sense.”