Football
News
A wonder goal from the Argentine sent the Hammers on their way
Simon Lillicrap
19:57, 01 Jan 2022

West Ham put in a stunning first half performance which featured a Manuel Lanzini wonder goal and survived a late Crystal Palace comeback to secure a 3-2 win which puts them just one point behind Arsenal in fourth. It was an utterly dominant first 45 for David Moyes’ men, who then had to cope with an inspired Palace comeback, but ultimately they had enough to hold on.

Lanzini’s goal, which put West Ham 2-0 up was nothing short of magical. It was one of those goals that the entire footballing world can enjoy, a couple of touches to set the ball up, and then a fierce volley that fizzed past Vincente Guaita. He picked up a Declan Rice pass on the edge of the box and then flicked the ball up for himself while avoiding two challenges, before he hit a left-footed volley in off the bar, past the helpless goalkeeper.

It was a moment of magic that a fellow famous Argentinian number ten would have been proud of and the standout moment of a sizzling encounter, that both sides went for from the start.

In the opening minute, Jordan Ayew cut the ball back for Jeffrey Schlupp who hit the post from inside the six yard box. However, West Ham came back into the match and were only denied by a stunning double save from Guaita. First he denied Michail Antonio who powered his effort towards goal and then he got back up to stop Lanzini’s effort crossing the line.

West Ham did get their lead soon after however as Antonio got onto the end of a perfect Said Benrahma cross to poke home from close range. The Algerian will be departing for the AFCON this week and his creativity will be missed as he has been on flying form so far this season.

Soon after the Hammers doubled their lead as Lanzini took three sensational touches. Moyes will have been purring on the touchline as his side put Palace to the sword, but to give Patrick Vieira some credit, his side kept on creating chances.

Sky Sports Premier League
@SkySportsPL
WOW! 😍
Manuel Lanzini doubles #WHUFC's lead with a sensational finish - it doesn't get much better than that! 🔥 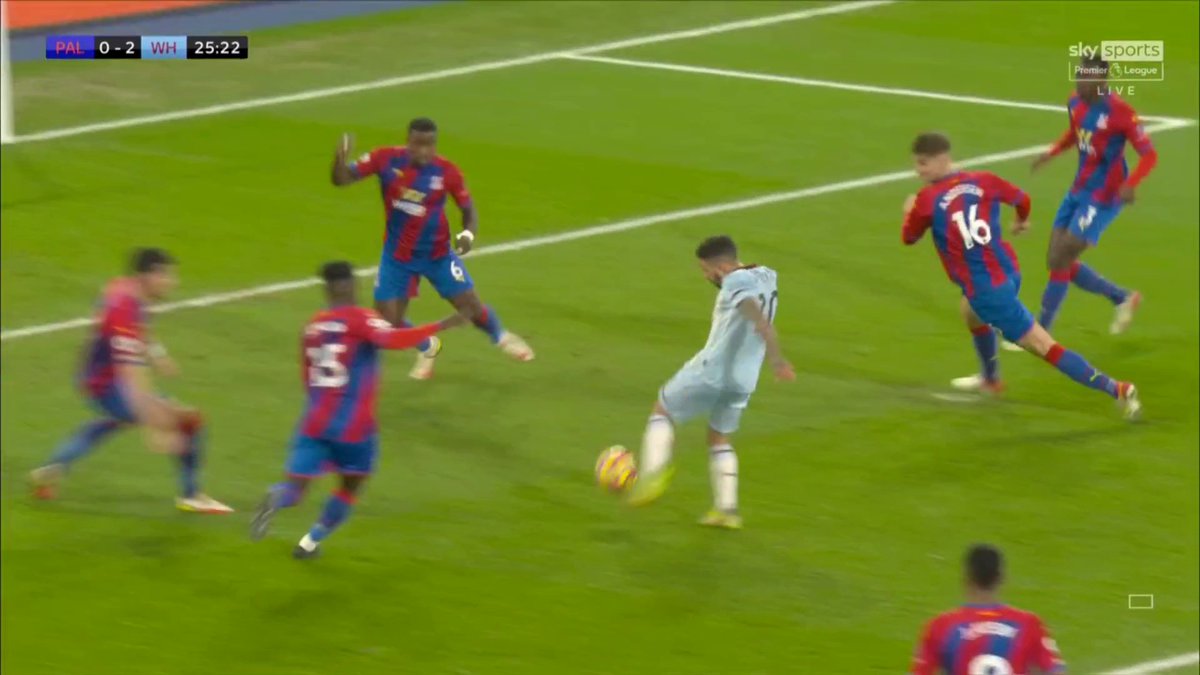 Ayew got in down the right to set up Odsonne Edouard who saw his finish hit the crossbar and Benteke’s half-volley was stopped by Lukasz Fabianski as Palace knocked on the door but then Luka Milivojević made a fatal error as he controlled the ball with his arm inside his own box.

The decision initially wasn’t given by Darren England, but VAR referred him to the monitor and from there, it was a simple decision. Lanzini stood up to fire the ball into the bottom corner and give West Ham a 3-0 lead at half-time and double his personal tally for the night.

Crystal Palace fought back with vigour in the second period as Edouard saw his shot miss the goal, but the visitors remained dangerous as Antonio fired a volley wide. Vieira rang the changes and substitute Michael Olise whipped in a ball for Edouard to poke home to spoil West Ham’s clean sheet and give Palace some real hope heading into the final seven minutes.

As the clock ticked to the 90th minute, Olise then whipped in a free-kick that went all the way into the bottom corner. Selhurst Park roared their team on but ultimately they ran out of time, although the comeback will have given them some hope for the future.

West Ham continue on their merry way, while Palace showed great fight but ultimately start the New Year with a loss.