Football
News
The Barca legend wanted to leave last summer and could be off after this season
Elliott Bretland
14:00, 03 Mar 2021

Lionel Messi could well stay at Barcelona despite the deep crisis the Catalan giants currently find themselves in, according to La Liga expert Gerry Armstrong.

On Monday, former president Josep Bartomeu was arrested along with chief executive Oscar Grau and two others for their alleged roles in ‘Barcagate’ after officials were accused of launching a smear campaign against current and former players who were critical of the club.

Messi, Gerard Pique and Pep Guardiola were among those targeted by the negative stories and social media posts, Reuters reported.

However, despite those problems and the fact Barca are struggling with growing financial issues, Armstrong, who is a co-commentator for Sky Sports’ Spanish football coverage, believes the Argentine could stay at the Camp Nou if Joan Laporta returns as president. The 58-year-old held the position between 2003 and 2010 and oversaw a golden period in the club’s history. In the running again, Armstrong believes he could be key in Barca keeping Messi.

“It’s up for debate, there’s three or four members there who are all looking to get in,” Armstrong told Betfred of the elections. “I was talking to Guillem Balague about it and he feels that if they appoint the right person, and this is the key, there’s a chance Messi might even stay at the club.

“The fans would love to keep Messi but can they afford him, because the club owe a lot of money? Players had to take a seventy per cent reduction in their wages over the last year through the pandemic. I’ve never seen anything like this before at any football club, especially a club as big as Barcelona.” 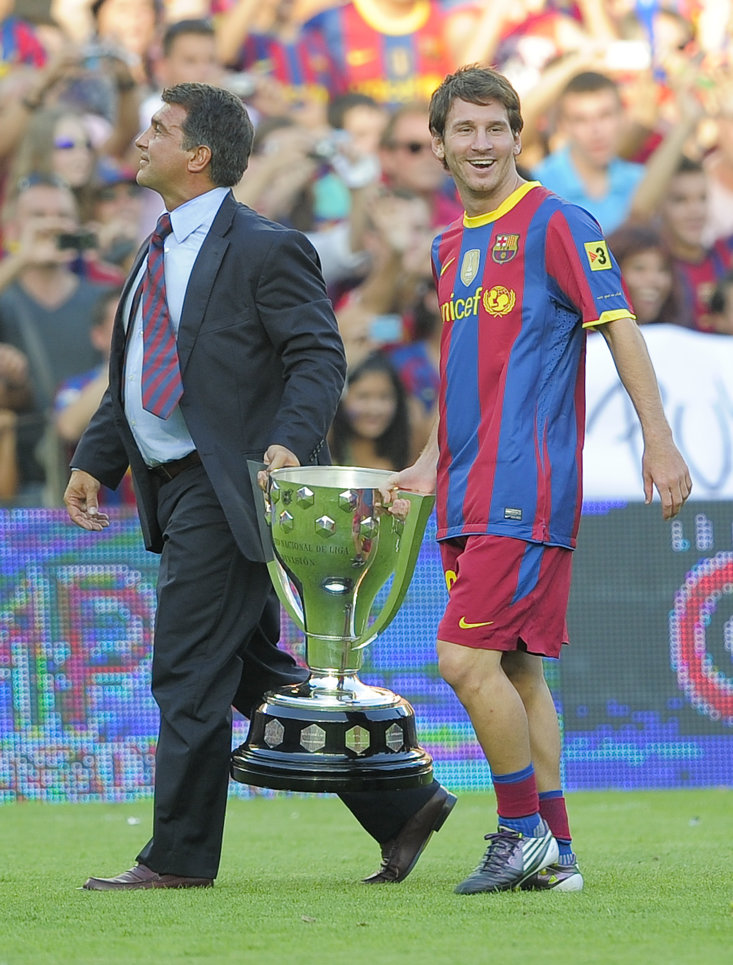 LAPORTA WAS BARCELONA PRESIDENT BETWEEN 2003 AND 2010

Amid the crisis, Armstrong believes the legendary Barca number 10 will have plenty of options, whether Laporta returns or not.

“I know Joan Laporta, he’s one of the campaigners from before and he did a really good job. He’s got to have a great chance, but again it’s to do with Lionel Messi. He’s the man, they want to keep him. I’ve seen him linked with American football, linked with David Beckham at Inter Miami... they’re always going to be linked, and so is Cristiano Ronaldo.

“They want to keep him at Barcelona; Laporta could be really important if he is successful, because Messi knows what he’s going to get with Joan Laporta.”

While he will be desperate to keep Messi, Laporta has also been linked with a move for Arsenal boss Mikel Arteta. However, Armstrong believes the Spaniard would be likely to stay in north London to finish the job he started last season with the Gunners.

“Mikel Arteta’s allegiance and connections with Pep Guardiola, he holds him in really high esteem and that would be an interesting one.

“He’s got a job to do at Arsenal and I don’t think he would leave Arsenal too readily. I think he wants to build that club and get it back to where it used to be.”

Barcelona are currently second in La Liga, five points behind leaders Atletico Madrid having played a game more, while in the Champions League they trail Paris Saint-Germain 4-1 from the first leg of their last-16 tie.