Arsenal substitute Alexandre Lacazette was the party pooper on Patrick Vieira’s return to north London, coming to the rescue to spare Mikel Arteta’s blushes in the dying seconds against Crystal Palace in a 2-2 draw. In a game where the Gunners were second best, it was another case of history repeating itself for the Eagles as they struggle to convert draws into wins.

There had been many games this season where the Eagles had come away from a match with a point or a defeat, and it wasn’t what their performances deserved. Tonight’s game was another example. It was always going to be a tough test for Vieira’s and it looked as though it was going to be another missed chance as his side went behind in the early stages to a Pierre-Emerick Aubameyang strike. Palace largely struggled to pose a threat on Arteta’s defence in the first-half but it was a completely different story in the second-half. His side were gifted a leveller which Christian Benteke made no mistake of firing a powerful effort into the bottom corner to open up the contest. From then it seemed as though only one side were going to go on and claim the three points.

His compatriot and young starlet Michael Olise made another huge impact off the bench as he set up fellow Frenchman Odsonne Edouard to put the visitors ahead, after a brilliant ball recovery by Chelsea loanee Conor Gallagher. Arsenal continued to push in the latter stages in search of a leveller themselves and after several scares, Palace were unable to thwart Lacazette’s strike in the dying seconds of the game to rescue a point for the hosts. With this game marking the Eagles’ third consecutive draw in the Premier League, Vieira will not want his players’ heads to drop, but if they fail to register a victory soon, things could get ugly. 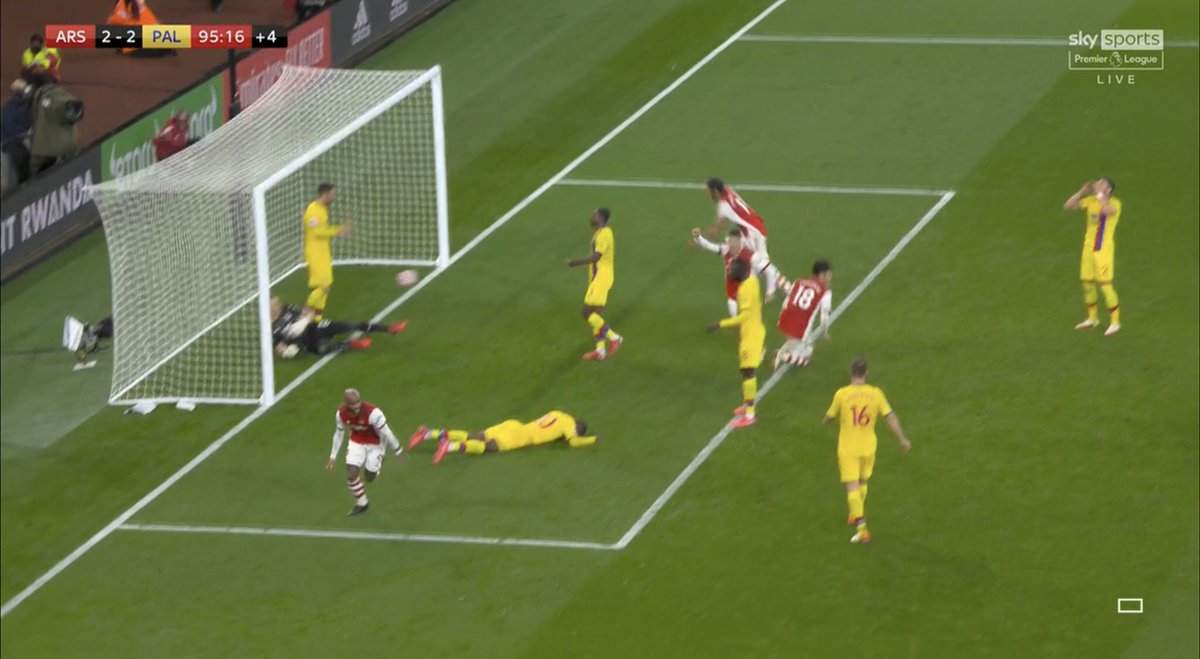 As for his opposite in the dugout, he will have a lot to thank Lacazette for as his appearance off the bench sparked the Gunners into life in what had been a very poor start to the second-half. His fine display will have the Spanish boss considering starting him for when they welcome Aston Villa to the Emirates on Friday night.

It was a fast start for the Gunners as they found themselves ahead inside the opening 10 minutes. Nicolas Pepe worked his way in from the right and forced Vicente Guaita into a save but Pierre-Emerick Aubameyang was on hand to fire home the rebound. Arteta’s side started brilliantly and they were in total control for most of the first-half in and out of possession. The visitors began to grow in confidence once Gallagher got an effort on goal, Benteke had a low effort saved by Aaron Ramsdale minutes after but the Eagles largely lacked that killer pass when approaching the final third. But with more phases of possession, they began to start asking questions of Arsenal’s defence. Gallagher then had a venomous volley tipped away by Ramsdale on the stroke of half-time.

The second-half picked up exactly where the first one left off. Thomas Partey had a curling effort just fly wide of the post. Having almost scored at one end he set up one at the other end as a sloppy pass went straight to Benteke who made no mistake in finding the bottom corner to pull Vieira’s side level and open up the contest. Arsenal were struggling to keep the ball and create any chances but they were sparked into life by substitute Alexandre Lacazette. Immediately after coming on, he helped his side win a corner and he gestured to the crowd to raise their voices. He linked up well with Aubameyang and came close to putting his side back in front, only to be denied by Guaita. The home crowd were then stunned into silence as their substitute Olise teed up Edouard who thrashed an effort in off the bar to complete the turnaround.

As the hosts pushed to pull themselves level late in the game, full-back Kieran Tierney had a brilliant chance on the left side of the box but he rattled the crossbar with his effort, spurning the best chance his side had after going behind before Lacazette made himself the hero to rescue a point at the death.