Football
News
The Bees have put serious distance between themselves and the relegation zone ahead of Sunday’s clash with West Ham
Kris Voakes
11:05, 10 Apr 2022

For a while there it felt like people couldn’t wait to consign Brentford to relegation. A run of seven losses and a single draw in eight matches through January and February had plenty of neutrals identifying them as a prime candidate for the trademark late-season plummet into the bottom three that has befallen many a Premier League club in the past.

The Bees had gone from 12th spot with a 12-point buffer over those in the bottom three at the beginning of 2022 to sitting in 15th by the end of February, with only three points separating them from the drop zone and enough games in hand for all those teams chasing them that they could well have seen matters taken out of their own grasp.

Their 2-0 home defeat to Newcastle United which saw the Magpies leapfrog them in the table was the ultimate narrative-validator. Newcastle were on the up, with Saudi billions in the bank and their form improving dramatically, while Brentford were sliding inexorably back to where they belong with their tails between their legs.

But those who had made their mind up on Thomas Frank’s side are being shown to be as fickle as football fans can be. Brentford had just completed the shrewd signing of Christian Eriksen, had top scorer Ivan Toney returning from injury at a crucial time and had a softer run of fixtures lying in wait having had to encounter the likes of Liverpool, Manchester United, Arsenal and Manchester City as part of their eight-game skid.

Even during that time, they had reasons to count themselves unfortunate. They had outperformed Man Utd, Wolves and Crystal Palace in xG but had only managed to pick up a single point in those three games combined, while Josh Dasilva’s debatable early red card had helped to condition the flow of their loss to Newcastle.

“It’s all about the next game,” said Frank bluntly when pressed by the BBC on the worrying run of results, and the Dane was proved entirely correct by the 3-1 win at Norwich City which followed with the returning Toney netting a clinical hat-trick. 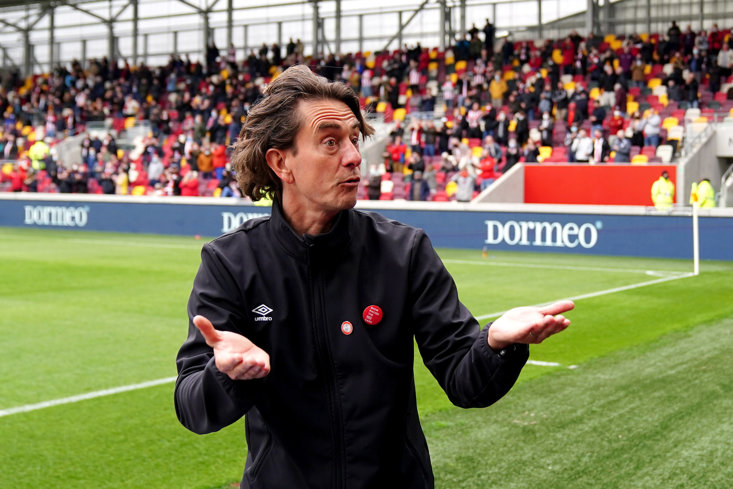 Since then they have beaten Burnley and, most memorably, Chelsea on the way to putting serious distance between themselves and the relegation zone once again ahead of Sunday’s clash with West Ham United at the Brentford Community Stadium. Just as they were earlier in the season, the Bees are playing with a style and structure which makes them impossible to consider as candidates for the drop.

With Eriksen inspiring and the likes of Toney and Vitaly Janelt earning plaudits from all quarters, this is a side which should never have been expected to go on a slide dangerous enough for them to slip into the bottom three. In truth, they would have needed to have won no more than a couple of their last 20 games of the season to become serious relegation fodder given how poor the likes of Everton, Leeds United, Norwich and Watford have been below them.

It was a lazy assessment to identify an unfashionable side playing their first top-flight season in 75 years as potential fall guys the moment their performances stopped being reflected in their results. And what has instead materialised is exactly what Frank had expected out of his side; a focus on the next game and a belief that by playing positive football they had more than enough to get back on the horse.

“From the beginning of the season we wanted to be brave and attack,” he told BBC Radio 5 Live this week.

“I know everyone highlighted us as the favourites to go down but we just focus on the next game and want to end as high as possible. Why not try to be an asset to the Premier League?

"In January and February we struggled a bit and that is where you need to be really strong and keep believing in what you are doing. We keep the messages consistent and try to be on top of the game and try to dominate at times even against world-class opponents.”

Their 4-1 win over the European champions at Stamford Bridge last weekend has surely put paid to the doubters, and they would do well to leave Brentford out of their thinking when it comes to relegation next season too. With Fulham leading the cast of recent Premier League failures aiming for promotion to the top flight there doesn’t seem to be a great calibre of clubs ready to drag in some of the more established order.

While it might be early to count Brentford among that latter group, their sound structure behind the scenes over the best part of a decade has seen them overcome the losses of many key players to gradually make their way back into the highest tier. And now there is little sign that the upward trend is about to be curbed, no matter what the lazier pundits would have you believe.

Brentford have proved they belong in the Premier League.