The 35-year-old made the announcement on social media following his defeat to Gustavo Lemos at the end of March, the first time in his career he has ever been stopped inside the distance.

Selby, Wales’ 12th and most recent world champion, says that he has no regrets, and leaves the sport happy, healthy and with his family financially secure. ‘The Welsh Mayweather’ - a tongue-in-cheek moniker alluding to the stacks of talent Selby brought to the ring - ticked pretty much every box on the boxing bucket list since turning pro in 2008, picking up titles at Welsh, Celtic, British, European, Commonwealth and World level.

Selby’s crowning achievement, in a career spanning 14 years, came in 2015 when the man from Barry stopped the previously unbeaten Evgeny Gradovich to claim the 126lbs world title. He defended that title five times before losing it to Josh Warrington in 2018 at Elland Road.

After the defeat to Warrington, Selby would win twice more before falling to a close split decision loss to George Kambosos Jr. The fact that Kambosos would go on to beat Teofimo Lopez to become the unified lightweight champion in his next fight, shows the level that Selby operated at even in the twilight of his career.

lee selby
@leeselby126
After 27 years of boxing it's time to hang up the gloves.
Welsh, Celtic, British, Commonwealth, European & IBF World Champion.
I exit the ring with no regrets, happy, healthy and my family financially secure.
Thank you for all your support. 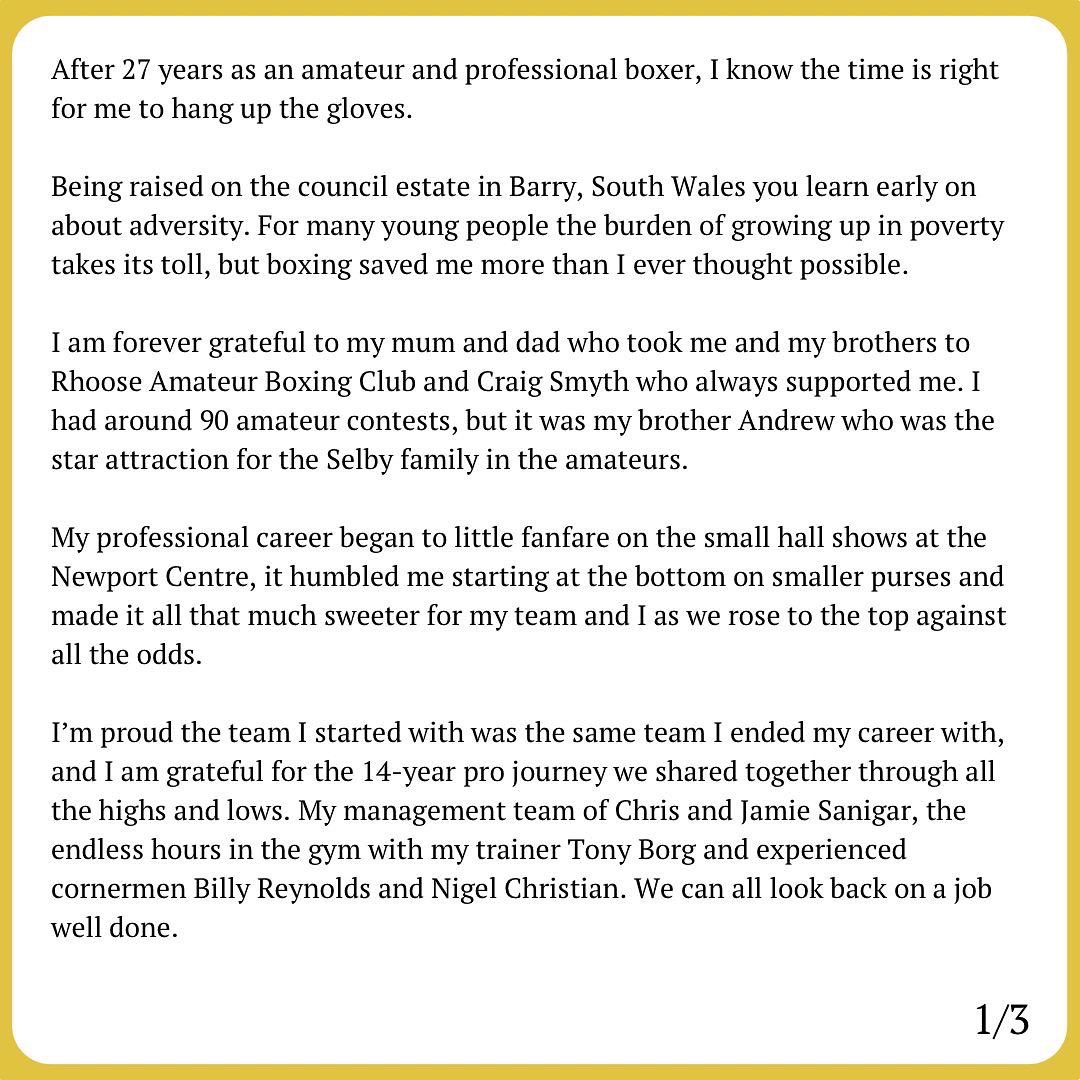 Speaking in a statement, Selby wrote: “After 27 years as an amateur and professional boxer, I know the time is right for me to hang up the gloves."

"Being raised on the council estate in Barry, south Wales, you learn early on about adversity. For many young people the burden of growing up in poverty takes its toll, but boxing saved me more than I ever thought possible.

"I am forever grateful to my mum and dad who took me and my brothers to Rhoose Amateur Boxing Club and Craig Smyth who always supported me. I had around 90 amateur contests, but it was my brother Andrew who was the star attraction for the Selby family in the amateurs.

"I had to do things the hard way, going the traditional route winning every possible title along the way including the Welsh, Celtic, British, Commonwealth, European and IBF world title. I won the Lonsdale belt outright and successfully defended my world title on five occasions.

"Of my 32 professional contests, 22 of those bouts were either title fights or 12-round contests. I am proud to be the 12th Welshman to win a world title and my name will now forever sit in the record books alongside those great fighters. When I look back on my career, I have realised everything I set out to achieve.

"My biggest thank you goes to all my fans, your support over the years has been incredible. I exit the ring with no regrets, happy, healthy and with my family financially secure. Boxing has been my life and I am sure my involvement in the sport will continue in the years to come as I look to set new goals."

Thanks for the memories, Lee!