Leeds United remain a conundrum in the Premier League. There have been subtle signs of improvement in the team since Jesse Marsch replaced Marcelo Bielsa almost a year ago but yet they still seem to be extremely vulnerable in defensive situations.

Marsch has faced a lot of scrutiny this term given the amount of money invested into the team over the summer and results have not been as good as the fans were hoping for this season. With the impressive arrivals of Brenden Aaronson, Tyler Adams, Luis Sinisterra and Wilfried Gnonto, there was an increased expectation of Leeds to become a more organised and more attacking side.

There has been some progress on the latter front with Leeds scoring 26 goals already this term, over half of their overall tally from 2021-22. They have reached this figure after 18 games while at this stage last year they had only scored 18. A lot of fans have been critical of Marsch for his side not being clinical enough but his team have outperformed where they were offensively under their predecessor last year and the same also applies defensively.

Bielsa’s team had conceded 36 at this stage a year ago, whereas Marsch’s side have conceded 33 this term. It is not a major improvement but it is an improvement nonetheless.

However, there are still huge concerns because Leeds have only been able to achieve four wins in the top-flight this campaign, and while this is one more than at this point in 2021-22, two points separate them from the relegation zone, while they had a five-point gap last season.

The survival race in the Premier League this year is a lot tougher than it has been in years because there are arguably eight sides that can fall through the trap door. Five points separate Nottingham Forest in 13th and Southampton in 20th, while just two points separate the Saints from Leeds in 14th. A lot of the focus this season has rightly been on the unexpected title race unfolding before our eyes but the relegation scrap is shaping to be just as entertaining.

Marsch needs the players to share the burden for scoring goals and keeping clean sheets. Spanish forward Rodrigo has scored 10 goals in the league so far, but the closest player to him for Leeds is youngster Crysencio Summerville with four - and he is currently ruled out through injury. Rodrigo is going to need a lot of support from his attacking teammates to help Leeds keep away from the bottom three. 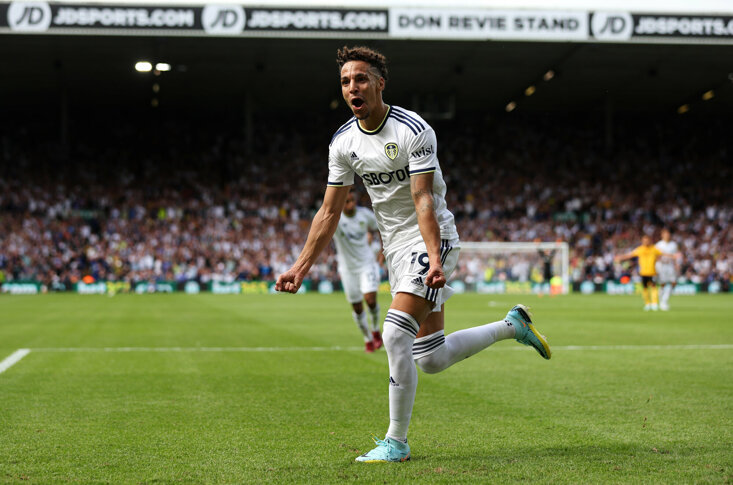 Rodrigo is Leeds' top scorer in the Premier League with 10

Fans will have been pleased to see both Gnonto and Patrick Bamford score twice in their 5-2 victory over Cardiff City in the FA Cup Third Round replay on Wednesday evening. Before Bamford’s injury setbacks last season, he was proving to be a reliable goalscorer at this level, having scored 17 in Leeds’ first season back in the Premier League in 2020-21. His time on the pitch has been limited in the last two years but grabbing that brace in midweek will have done wonders for his confidence and Marsch will be more than aware of what the striker can do when given chances.

As for Gnonto, he’s been catching the eyes of many lately with some exciting play from the wing and not to mention his stunning volley against the Bluebirds in the cup. The young Italian has had to work hard to get into the first-team picture at Elland Road after his summer move from FC Zurich. He made his debut at Anfield in October and has not looked back since. You can see he has an appetite to play and score goals and with more minutes under his belt you can see him contributing to Leeds’ survival effort.

With the team in need of more firepower, Marsch completed a club-record signing earlier in the window with forward Georginio Rutter joining from Hoffenheim for around £35 million. While it may be a concern that Rutter only scored two goals in 15 Bundesliga appearances before moving to England, the American coach clearly invested in him for a reason which he feels will aid his side in their quest to move up the table.

From a defensive standpoint, Leeds do have one of the worst in the division and this has often been overlooked in the transfer market. And given that they concede an average of 1.83 goals per game, this is a huge concern. They could benefit from adding some defensive reinforcements to their ranks this month to boost their chances of staying up. But if they don’t, and are fortunate enough to retain their Premier League status next term, defenders should be at the top of their summer shopping list.

Leeds are 7/2 to get relegated with Betfred*