The contrast between the heights of the 2019 and the 2020 season that never was could not have been starker for Courtney Winfield-Hill.

The Australian, who didn’t start playing open-age Rugby League until 2018, after a successful cricket career in the Big Bash, went on to win the double with Leeds Rhinos, and take the Telegraph Women of Steel crown, before the pandemic brought about the cancellation of the Women’s game until this weekend.

Such was the extent to her rise to Rugby League prominence, Hill was invited to play for the Sydney Roosters in the 2020 Auckland Nines. A year and half later, she can finally look forward to taking the field again.

“It feels like a long time, because it is a long time!” she says. “It’s been a long 18 months, and I can tell you there are some very excited girls ahead of this weekend.”

The Betfred Women’s Super League was finally given the go-ahead to return in March when it was given official elite-sport status by the government, an announcement that was music to the ears of the Rhinos Halfback.

“It was an exciting feeling when we got the greenlight for training, and that’s been even more heightened now that it’s round one. Our girls are really keen, we’ve had six weeks of pre-season, maybe not of great quantity, but great quality and we’re chomping at the bit.”

It’s going to be difficult to top the remarkable 2019 season, both personally for Winfield-Hill and for the Rhinos, but she insists that success will not be defined by trophies this time around.

“We’re always looking for that elusive treble, and that’s in the back of our minds, but it will be a successful year regardless of trophies, it will be a success to just get rugby back full stop. We’ve got a lot of under nineteens coming through and this year some success will be based around blooding a few youngsters into our team.” 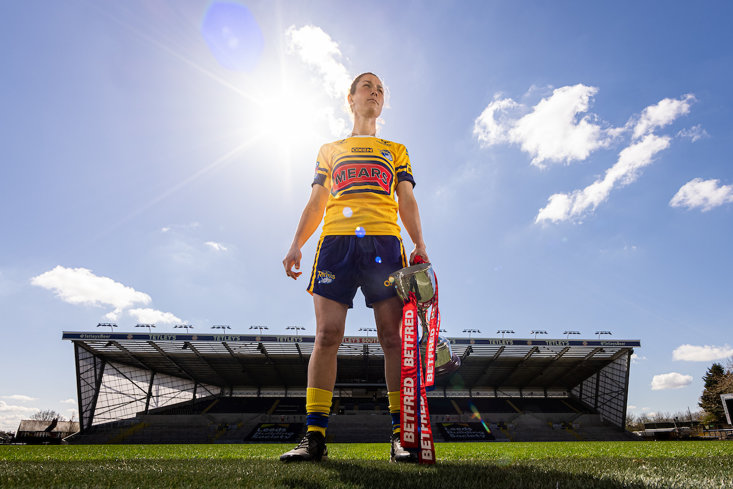 Even if Winfield-Hill is playing down their ambitions for this year, it’s hard to imagine that the Rhinos won’t be in the play-off picture come the end of the season.

“St Helens, Castleford, hopefully us, I’d like to think will be in the mix,” she says

“Saints have recruited well and Cas have got points to prove, and we’ve got titles to defend, but then there are others, Bradford showed some really good signs, you can never ruled Wigan out and Featherstone are a tough side. I’m looking forward to some really tough and competitive matches.”

When Winfield-Hill lifted the Super League trophy 18 months ago, the women’s game was on the crest of a wave. The Grand Final, played in front of 3,000 paying supporters and the Sky Sports cameras felt like a landmark moment, and Courtney is hoping things pick up where they left off when the competition kicks off again on Sunday.

“We were building some lovely momentum in 2019 and it’s a shame that the handbrake was put on, but I just hope that after a year without women’s rugby, that people have got a real hunger and thirst for rugby league."

Of course, it’s not just the domestic game that will be in the spotlight this year, the Rugby League World Cup returns to England in Autumn, with the Men’s, Women’s and Wheelchair competitions all taking place at the same time, and the opportunity for growth, Winfield-Hill believes, is huge.

“With hosting all three World Cups, It’s a really special year, and hopefully the Super League can generate some real momentum for all of our England teams heading in that.”

There’s a lot of rugby league football to be played before that point, and after such a long lay off, Courtney is expecting some mixed emotions come Sunday afternoon.

“There will be a lot of nerves, and a lot of excitement, but I know for me personally, it will be met with a lot gratefulness, that’s probably the biggest emotion that sticks out for me, I’m already super grateful for the effort that has gone in to get us under elite guidelines and back to training and matches, so yeah, plenty of gratefulness will be going around on Sunday for sure!”

The Betfred Women’s Super League kicks off on Sunday with four games, Wigan Warriors vs Warrington Wolves is available to stream via the RFL’s Twitch page.