Leeds will have seemingly had more fans backing them than usual on Monday night when they hosted Liverpool at Elland Road. The Reds, along with Manchester United, City, Arsenal, Chelsea and Tottenham, have faced a 24 hour backlash from their own supporters and football lovers across the land after announcing plans to join a breakaway European Super League with the biggest names in Spain and Italy.

As the home side wore t-shirts which read ‘Football is for the fans’, this almost felt like a Premier League versus Super League clash. Marcelo Bielsa’s team almost fighting for this country’s football community against a team happy to play against fellow self-appointed big guns. Gary Neville called the encounter on Twitter, Leeds vs Greeds and 120,000 social media users liked the tweet. There is seriously strong feeling against such a proposal but still, Liverpool had a job to do and it looked like they had done it done courtesy of Sadio Mane’s first half strike. That was, until Diego Llorente’s late leveller.

The victory would have moved the Reds up into the top four on goal difference above West Ham. Should the Merseysiders finish fourth after 38 games, they will qualify for the Champions League… Will they participate? Who knows. They may instead play in the Super League. Or perhaps UEFA could expel them. 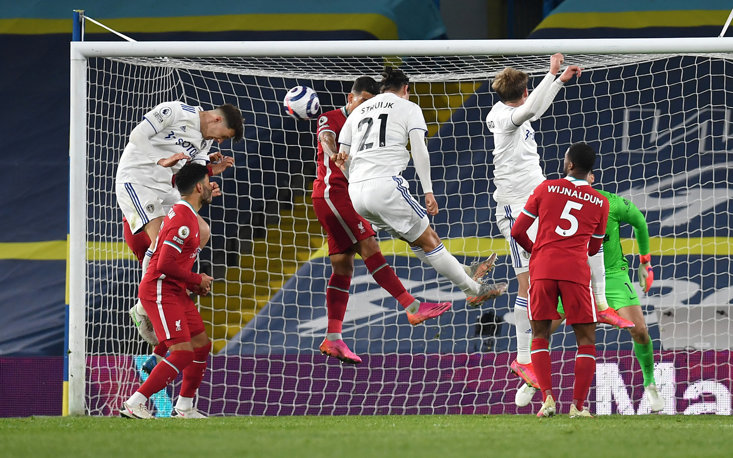 In a seismic day for the sport, Liverpool kept their focus, as did manager Jurgen Klopp who had to field questions on the matter before kick-off. Having previously stated he isn’t a fan of such a proposal and revealing he heard the news like every other fan, he still had to lead his team and that is serious pressure during such a frenzy.

Liverpool dealt with the pressure for much of the game but conceding so late will have just added to the craziness of the day. It’s a rarity but Liverpool didn’t dominate possession here and their failure to get a second goal cost them.

They started brightly, Thiago seeing a shot fly just wide of the post early doors before both sides exchanged shots. Then, on the half hour mark, Liverpool got their goal. Diogo Jota played a diagonal ball for Trent Alexander-Arnold to poke ahead of the now stranded Illan Meslier and Sadio Mane poked into an empty net.

In the second half, Liverpool looked to double their advantage but Leeds held firm and fared better. Patrick Bamford struck the bar as Leeds strived to equalise. Mohamed Salah later skewed wide and, as the clock ticked down, the game was poised.

With three minutes of normal time remaining, Leeds got a goal one feels was celebrated beyond Yorkshire. Diego Llorente climbed highest at a corner to head the ball home. Of course, the Liverpool team have not decided to sign up for the breakaway campaign abroad and nor has the manager, but there is a feeling of discontent from football supporters against the ‘Big Six’ right now and many will be pleased by Monday’s draw. For some, it will feel hollow. For now, they feel they are losing the game they adored.

Reds midfielder James Milner told Sky Sports after the game, "I don’t like it (the ESL) and hopefully it doesn’t happen." For a lot of Reds, that quote will have felt like more of a victory than the one that was snatched away from them at Leeds.

While Liverpool may have the Super League, this result suggests they may miss out on the Champions League as they sit two points behind West Ham who hold the (once) coveted spot.