“I wanted to be a career soldier but kept on drinking too much beer and getting in too much trouble - I had to make a career move”.

Brian McDermott seldom discusses his past as a Royal Marine. His preferred existence is always to be present in the moment, and right now that represents one of the biggest tasks of his coaching career: to fix wobbling Featherstone’s season and reignite their Super League promotion push.

Ambitious Rovers head into this weekend’s Betfred Championship Summer Bash having not only conceded their title lead to rivals Leigh, but fallen way off the pace being set by the increasingly fearsome Centurions.

A healthy league lead is now a three-point deficit and McDermott has been alarmed by a defensive collapse that has seen his side concede over 20 points in each of their last six matches. Hardly the kind of form you want to take into Saturday night’s latest showdown with the leaders at Headingley, the venue for an entire round of games over the weekend.

“We are in a slump but you have to enjoy it, and I’m fascinated by how the players are dealing with it. If you don’t enjoy it then you shouldn’t do it.” McDermott tells The Sportsman.

“I really enjoy working with them, a group of honest, transparent hardworking people with nobody blaming anybody else.

“All sorts of things are being said outside of the camp but that is not what is going on inside the bubble. People say you are not going to do it at the end of the year, you are not good enough. And that is what we are here for, to prove people wrong.”

McDermott is an incredibly complex personality with unpredictable moods and an intimidating exterior that belies a gentler, deep-thinking brain. He’s also the most successful coach in Super League history, winning four Grand Finals, two Challenge Cups and a World Club title during an eight-year dynasty at Leeds. 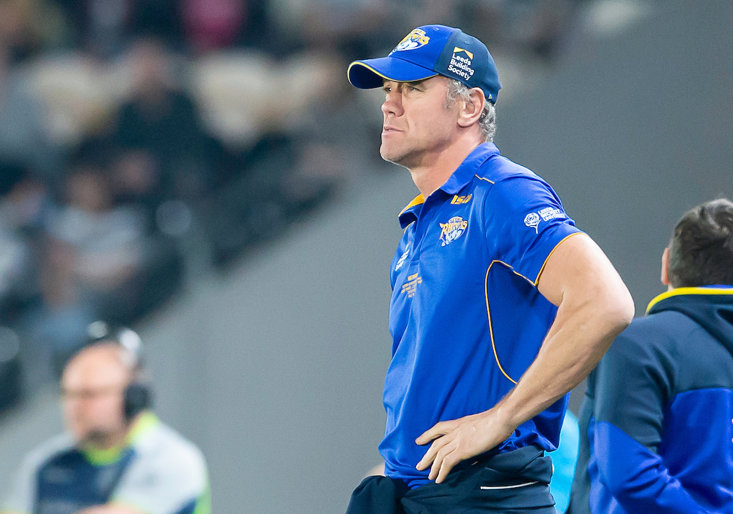 Very few journalists have ever got to know him, because McDermott doesn’t let that happen. Very few fans have grown to love him, for the same reason. This writer has had the rare pleasure of getting to know McDermott over a long period, through a tough stint attempting to build rugby league in London 15 years ago as head coach of Harlequins, into that trophy-rich halcyon period at Headingley.

Yet one thing that has never openly been discussed in any depth are his formative years in the armed forces, when McDermott served in Northern Ireland and fought in Iraq.

“I don’t think we have ever spoken about it but I do get asked about it,” he responds when I broach the topic.

“It’s probably the biggest thing I have ever done. It trumps everything I have done in rugby league as a player or coach. I would go as far as to say that had I not joined up then I don’t think I would have had the career I have had in sport.

“It’s as close to being in the military as you are ever going to get if you are involved in team sport. It is the same type of mentality and devil-may-care attitude. No challenge is too big.”

McDermott only played rugby league as a kid as his older brother Paul was a professional, with York, Wakefield and Sheffield. “I wasn’t very good, and that isn’t me being humble, I just wasn’t that good,” Brian reveals after agreeing to a rare delve into his past.

“I packed in playing when I was 13 and pretty much made the decision to join the Corps when I was 14. I was hell-bent on that and had five brilliant years in the Royal Marines.

“I wanted to be in forever, but when I went for promotion the Sergeant said that as long as his arse points downwards I would never get a promotion. So I needed a different career path.”

When McDermott left the Marines in 1992 he earned a trial with Bradford Northern and signed a professional contract to take up a career in sport.

“I couldn’t have done any of that without joining the Marines first,” he says.

“There was no rugby league in the forces when I was there, it wasn’t allowed to be played. Back then a rugby union player couldn’t even trial for league. League in itself banned amateur players from having professional trials so it was a bit of a mess back then.”

Featherstone will play their top-of-the-table clash in a special “Salute to Service” army kit this weekend as a nod of respect to those, like their head coach, who have served for the nation’s freedom. And for McDermott, an entire career in elite sport has been built - he believes - upon military foundations.

“Any lad who joins up and gets the green beret, what that does for them is give them the belief that anything can be achieved.

“I was 17 when I joined up and I look at some 17-year olds today and wonder how on earth I could have done something like that. It gives you such confidence that anything can be achieved.

“Playing for Bradford and Great Britain were massive things but I never thought of it like that because of what I had already done in the past.”