In Greece hours earlier, Arsenal absolutely had to beat Benfica to keep their season alive. In Leicester, the Foxes would have loved to have beaten Slavia Prague and perhaps expected to as well. However, while a loss for the Gunners would have been a disaster, defeat for the Brendan Rodgers' side is just a minor bump in the road.

Out of Europe at the first knockout stage, they still sit third in the Premier League table, only missing out on second place due to a lesser goal difference than Manchester United. The blow of being dumped out of the Europa League will be lessened if they qualify for the Champions League in May. Less games means more focus domestically.

On Thursday, they were downed at the King Power Stadium by a 49th minute Lukas Provod strike before Abdallah Sima, Slavia Prague’s top scorer, lashed the ball into the bottom corner past a helpless Kasper Schmeichel who got down at full stretch but couldn’t keep the rifled effort out. This was Slavia’s first win on English soil having previously failed at Chelsea, Arsenal, Leeds and Tottenham. They were deserving winners and Leicester were below-par.

It’s a disappointment, of course. Their fans will have wanted much more, the players and staff too. But they will learn from this and it will stand them in good stead for the great road which lies ahead. Leicester are building, with the progressive Rodgers using his tactical nous to merge the experience of Jamie Vardy and Schmeichel with the youthful talents of James Maddison, Wesley Fofana and Harvey Barnes. 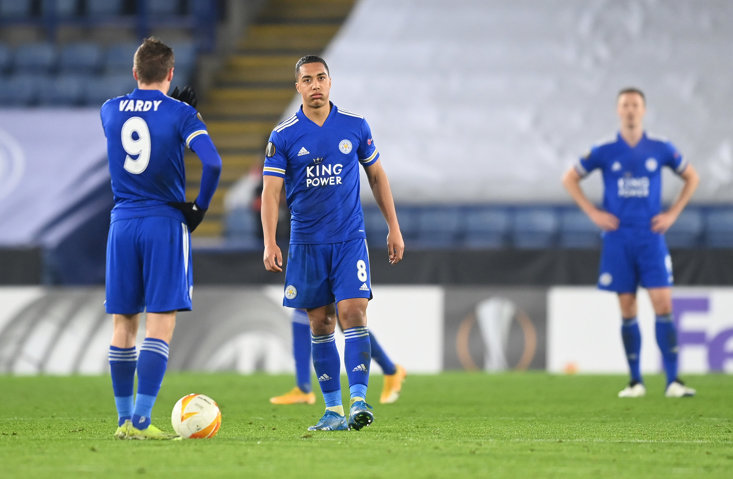 When Leicester shocked the world to lift the Premier League title back in 2016, it seemed a complete one-off, especially when they finished the next campaign in 12th. Since then, they have had two ninth-placed finishes and cruelly missed out on the Champions League last season on the final day. They’ve made huge progress, working quietly and diligently to become a force.

Here, against the Czech champions, it just didn’t click. Leicester just didn’t look like scoring. On the hour mark, Vardy controlled the ball and it bounced up onto his hand. Free-kick Slavia. He bemoaned the bad luck. With fifteen minutes to go, Caglar Soyuncu played the ball out wide to nobody and it sailed out for a throw. Ten minutes to go, Ricardo Pereira launched a hopeful punt into the area but it sailed to a deserted back post and the goalkeeper caught it with ease. With it all to do, even a consolation didn’t come.

“Youri's [Tielemans] clearly better when he’s deeper as he allows us to play it through to the front players,” Rodgers said. “I was trying to get the creative player in that forward position to feed Jamie [Vardy]," said Rodgers after the game. “It’s my responsibility. I pick the team to try to get the result and that clearly didn’t work as well as I would have liked.

"I would expect us to do better but when you’re missing the players we are, it has an effect. There are no excuses. The best team won.”

Leicester are learning and Rodgers is learning more about his squad as they continue to develop. Next, they host Arsenal before a tough trip to Burnley. The Foxes have to forget this season’s European exit and just remember the lessons learned, for they will surely have another crack at it in 2021/22.

Leicester are building. There will be setbacks along the way but this still feels like the start of a special era where the Foxes can consistently challenge towards the top of the table and ruffle the feathers of the supposed ‘Big Six’. Their time will come again and they have a bright future to look forward to.

Elsewhere in the Europa League, Manchester United progressed with a 0-0 draw, beating Real Sociedad 4-0 on aggregate, Rangers defeated Royal Antwerp 5-2 on the night to win 9-5 overall and in Greece, Pierre-Emerick Aubameyang rescued Arsenal with a late header to see them overcome Benfica.