Football
News
Brendan Rodgers picked up his first major tournament win in England after the Foxes beat Chelsea 1-0 in the FA Cup final
Kieran Spratt
19:44, 15 May 2021

It might not compare to the Claudio Ranieri fairytale of 2015/16 but it’s been a sensational season for Brendan Rodgers’ Foxes who are well on course for a top four finish in the Premier League and, with a long-awaited FA Cup in the bag, the Northern Irishman has written himself into the history books at the East Midlands club.

After falling short in their previous four finals, Leicester have become the first ‘new’ FA Cup winners since Wigan in 2013 and are the 44th club to triumph in the oldest club competition in the world. 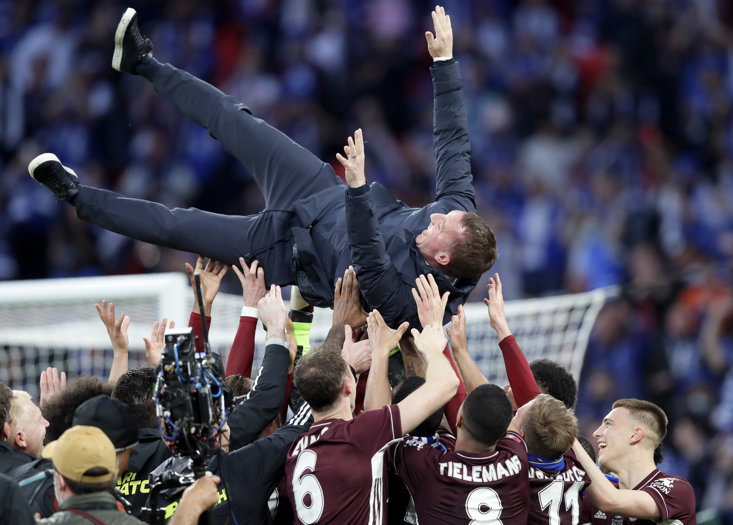 Brendan Rodgers Is Hoisted In The Air By His Leicester Players

Only two points separate third-placed Leicester and fourth-placed Chelsea in the league and perhaps unsurprisingly, little separated the pair in a compelling contest on the pitch.

Tielemans, unquestionably the Man of the Match, scored Leicester’s first FA Cup final goal in 58 years to break the deadlock. The Belgian burst onto the ball in midfield before unleashing a stupendous strike that whistled past Kepa into the top corner of the Chelsea goal. After a cagey opening, the game might not have lived up to the billing of an FA Cup final up to that point but the goal was certainly fitting. Utterly sublime.

Chelsea picked up the tempo after going a goal behind and Kasper Schmeichel’s fingertips were all that stood between Leicester and a Chelsea equaliser when clearing Ben Chilwell’s goal-bound header off the line.

Thomas Tuchel’s men thought they had drawn level with just two minutes to go. Thiago Silva picked out Chilwell, who diverted the ball into the six-yard box where Caglar Soyuncu's clearance bounced off Wes Morgan and into the Leicester net, sending Chelsea fans into pandemonium. However, pandemonium swiftly turned into panic when VAR ruled that the former Leicester defender was offside by the narrowest of margins.

The last-gasp VAR controversy might put a dark cloud over an absorbing FA Cup final but take nothing from Leicester - they were outstanding across the pitch. In particular, Tielemans, who was putting in big tackles at one end and scoring at the other, was phenomenal, while Schmeichel pulled off a number of big saves to ensure the silverware was heading home to the King Power Stadium. 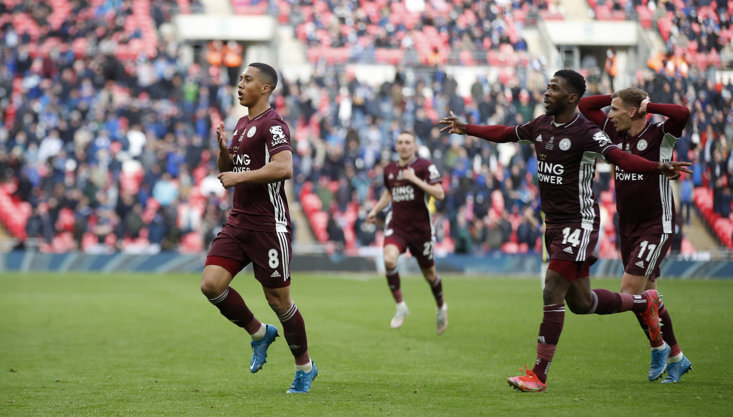 It will have been an emotional day for club owner Aiyawatt Srivaddhanaprabha too, who will have no doubt been thinking of his late father. Both have been absolutely integral to Leicester’s rise in recent years.

Speaking after the match, Schmeichel told the BBC, “Wow, what a day. It’s amazing, it’s what dreams are made of  - I’ve dreamed of this since I was a child

“The performance, the grit and determination, everybody’s been sensational, the team behind the team. When you do things properly, you have an eternal belief to what you can achieve - this is what we dreamt of, what we talked about for so many years.”

Rodgers, who won his first major tournament in England, added, “It’s a real collective effort at Leicester, from the board, players, staff and supporters.

"It’s an amazing day for the city. Youri’s goal was like an old-school FA Cup winning goal, but also Kasper’s saves. I thought we were the better team overall. We were super-aggressive and always a threat with the ball. Chelsea are an amazing team but I though we deserved to win. It’s the FA Cup, and as a British coach, it means so much. I’m so proud, but more happy for everyone else. A monumental performance and what a day for everyone involved with Leicester."

Leicester and Chelsea’s battles aren’t over yet, though. On Tuesday, Chelsea will have the perfect chance at revenge when these two meet at Stamford Bridge in the Premier League in a top-four crunch battle.