Newcastle turned the formbook and the Premier League table on its head with their best performance of an often troubled season on Friday night as they secured an emphatic 4-2 victory at Leicester City that all but guaranteed them another season in the top flight.

But it was until a late flurry a devastating evening for the third-placed Foxes. Brendan Rodgers’ side, badly hit by a warm-up injury to Jonny Evans, put in a kamikaze performance at the back.

And they are now faced with real fears of seeing a Champions League spot slip agonisingly away for the second season in a row. Should they also lose the FA Cup final to Chelsea, this could yet prove the season that got away.

“It was just mistakes," Marc Albrighton said at full-time. "The manager mentioned concentration in the week. It's been a tough season, but you have to see it out until the end.

"We switched off at vital times, you can't do that against any team in this league and we paid for it tonight. It's difficult to put your finger on.

“We were so obsessed with trying to get that first goal and settle early nerves. But we need to keep it tight, and we let them in. We knew the pace they had and that's what's done us.”

The result gives Chelsea the chance to take third spot, and will have offered hope to West Ham, Tottenham and Liverpool desperate to make up ground in the hunt for fourth place.

However the good news stories were all from Steve Bruce’s Newcastle. On-loan midfielder Joe Willock, recalled after being left out against his parent club Arsenal, scored for the fourth time in four appearances, the first player to do that for the Toon since Papiss Cisse in 2012.

And the club’s longest-serving player Paul Dummett scored his first goal for five and a half years and only a fourth ever before half-time. Two clinical finishes from Callum Wilson after the break sealed the rout, before Marc Albrighton and Kelechi Iheanacho mustered late consolation goals.

It was five years to the day on Friday since Wes Morgan and Claudio Ranieri lifted the Premier League trophy at the King Power Stadium following one of the most stunning seasons in football history culminating in the famous 5,000-1 shot fairy-tale title success.

That earned them a memorable Champions League campaign in 2016-17 that saw them reach the quarter-finals, only losing to Atletico Madrid by the odd goal in three.

But having faded at just the wrong moment and missed out on the blue-riband competition last season, it would represent a devastating blow for the East Midlands club should the same fate befall them from an even better position with fewer games remaining this time round.

But anyone watching the first 75 minutes of this match with no prior knowledge of the season’s exchanges would scarcely have believed which team had started in third place in the table, and which had been battling against the real threat of relegation for almost the entire campaign. 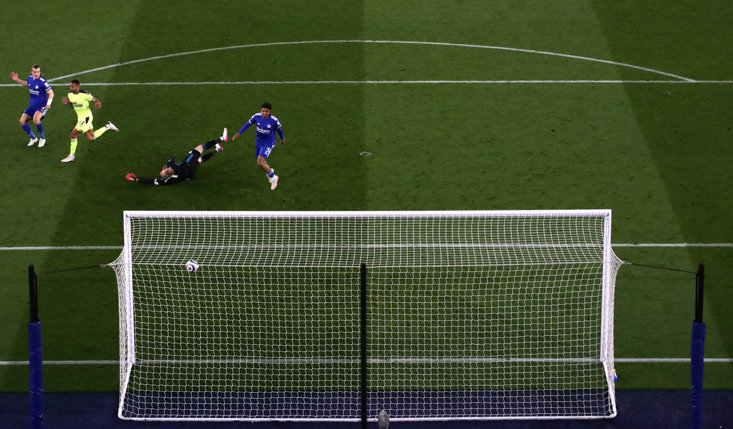 There was a late change to the line-up for the Foxes as Evans limped off with a heel injury in the warm-up, seeing Marc Albrighton drafted in as a wing-back and Timothy Castagne moving inside to become part of the back three. And it proved crucial.

Newcastle started as if they sensed uncertainty in the home side’s defensive organisation. Wilson won a free-kick in a dangerous place just outside the area, but Matt Ritchie’s delivery and the second attempt were cleared.

Federico Fernandez then should have done better with a close-range header from Jonjo Shelvey’s free-kick, and then with the best chance to that point Allan Saint-Maximin looked certain to score but was only denied by a great save from Kasper Schmeichel.

However the Toon got the lead their start fully deserved after 22 minutes, and it came courtesy of a terrible blunder from Caglar Soyuncu.

The Turkish international defender was caught napping by the recalled Willock, and the on-loan Arsenal midfielder swooped to score a fourth goal in his last four Newcastle appearances.

We knew we had to get something out of today's game. To come here and do it so convincingly is brilliant.

"I've come off the bench a few times and scored," the Arsenal loanee said at full-time. "So I was knocking on the door and I told the manager I needed to start and he believed in me and put me in and hopefully I repaid him.

"They are a top side, fighting for the Champions League. We had to defend well and knew we had more than enough pace on the counter to get the goals like we did today. That was not how we wanted to finish. We wanted to stay on top.

Wesley Fofana might have done better with a header at Martin Dubravka after 25 minutes when he was found by Euro 2020 hopeful James Maddison. But the French defender was guilty of being outjumped and outmuscled in his own box after 34 minutes.

Newcastle’s longest-serving player Dummett, 29, got to a Matt Ritchie corner first for only a fourth ever goal for Newcastle and a first for five and a half years to put the visitors firmly and surprisingly easily in the box seat.

And Wilson took full advantage of yet another Leicester defensive howler after 64 minutes from Castagne – stealing the ball and rounding Schmeichel before firing home his 11th goal of the season.

It got even better for the Toon nine minutes later as Wilson notched his second of the night, finishing from a tight angle after his initial effort had hit the inside of a post. Albrighton’s fierce strike was a fine finish and top scorer Iheanacho also weighed in, but too much damage had been done much earlier.