Leicester City got their Champions League challenge back on track with a 2-1 win against a much-changed Manchester United side at Old Trafford on Tuesday evening, sealing Manchester City’s fifth Premier League title in the process.

Brendan Rodgers’ side will play in their first FA Cup final since 1969 this weekend, so they may have been forgiven for having one eye on that match, but they still needed points on the board to secure a top-four finish, despite West Ham's defeat to Everton on Sunday easing that pressure to a degree. They certainly weren’t at their best tonight but eventually got the job done against a youthful United side.

Mass rotation among the Red Devil ranks was always likely given their congested fixture list and Ole Gunnar Solskjaer named a whopping ten changes to the side that beat Aston Villa 3-1 on Sunday. While that might have raised some eyebrows, especially among the clubs fighting the Foxes for a Champions League spot, very little separated these two sides for large portions of the game.

Leicester dominated early on and took the lead after just 10 minutes through Luke Thomas when Youri Tielemans lofted the ball to the back post for the full-back to rifle it into the top corner with a sumptuous strike. David de Gea had no chance of stopping it. 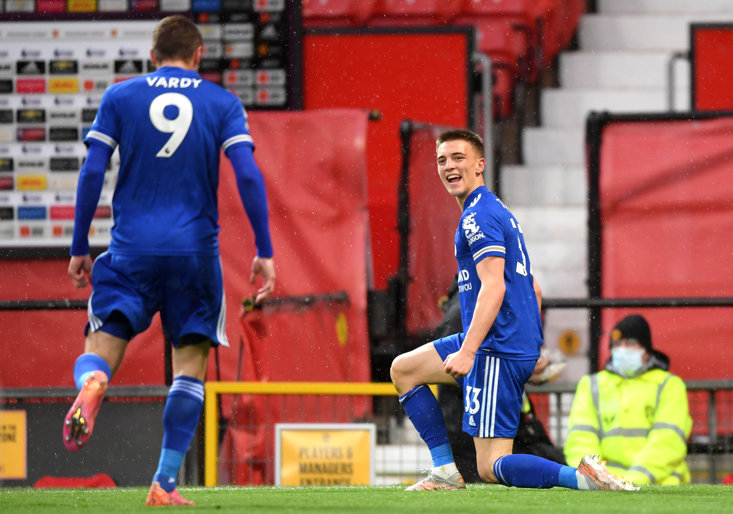 United drew level just five minutes later with their first meaningful attack of the match. Mason Greenwood was found by Amad Diallo on the edge of the box before picking out the bottom corner with a low strike to make it six goals from six Premier League games for the 19-year-old. Only four players in the competition’s history have scored more league goals as a teenager than Greenwood.

The equaliser saw Solskjaer’s side settle into the game better - particularly Greenwood, who looked like he was running the show all by himself at times. The confidence shown by United’s youngsters seemed to knock Leicester off their stride a tad and perhaps began to show signs that the importance of winning this game was weighing heavy on their shoulders.

But Turkish international Caglar Soyuncu wrapped up a vital three points for Leicester, and the Premier League title race in the process, with 25 minutes to go, towering over Marcus Rashford and Nemanja Matic to head the Foxes back in front.

After the win, Leicester’s first at Old Trafford since 1998, the club now need four points from their final two games to secure a top-four finish.

Goal scorer Luke Thomas told BT Sport after the game, "Playing at Old Trafford is a dream but to score here was unbelievable. With my emotions I didn’t know what to do. There’s no better feeling than seeing it go into the top of the stanchion.

“To come out with a win gives us a great chance going into next week. There’s always pressure but games like this when people don’t believe you can get a result - we have proved we are such a good team by getting a result.”

Manager Rodgers added, “It was a huge step [towards the Champions League]. I am so proud of the team. We started well and Luke [Thomas] scored an amazing goal.

“Once we scored we went sloppy and gave the ball away too easily which encouraged them. In the second half we were much better and restricted them.

“The players have definitely overachieved with all the big teams around. Now we can really enjoy the final at the weekend."