Football
News
The two clubs have battled it out for league positions in recent years
Joey Mills
11:10, 15 Oct 2021

City versus United takes place this weekend, and it is a rivalry that has enjoyed many flashpoints over the last few seasons. Vital games have been played out between the two teams with huge ramifications for both the winners and the losers. But these aren’t the City v United games you’re used to. This rivalry, which will write a new chapter this Saturday afternoon, is Leicester City v Manchester United.

The Foxes and The Red Devils have found themselves brawling to drink from the same fountain in recent years, that being the nourishing waters of European qualification. A symbol of how both sides’ fortunes have changed over the last decade, these teams that were separated by two divisions as recently as the 2008/09 season are now essentially peers. Leicester won League 1 that year, while Sir Alex Ferguson’s side equalled Liverpool’s all-time record of 18 English top-flight titles. Now, Leicester are the most recent champions of the pair, while United have not tasted league glory since 2013.

The first watery ripples of a turning tide between the two clubs occurred in 2014. Leicester had just been promoted to the Premier League, and United were the visitors at the King Power Stadium. Louis van Gaal’s Reds took a 2-0 lead, the second coming through a sublime Angel Di Maria chip over Kasper Schmeichel. United looked set to complete a rout over the Premier League newcomers, but that is not how events panned out. Instead, the Foxes roared back a minute later through Leonardo Ulloa. Nigel Pearson’s men were galvanised by their speedy riposte, and ended up winning a breathless game 5-3. Jamie Vardy scored their fourth, in an energetic display that served as his coming-out party in the top tier. He never looked back, and apart from a close call with the relegation zone, neither did Leicester. 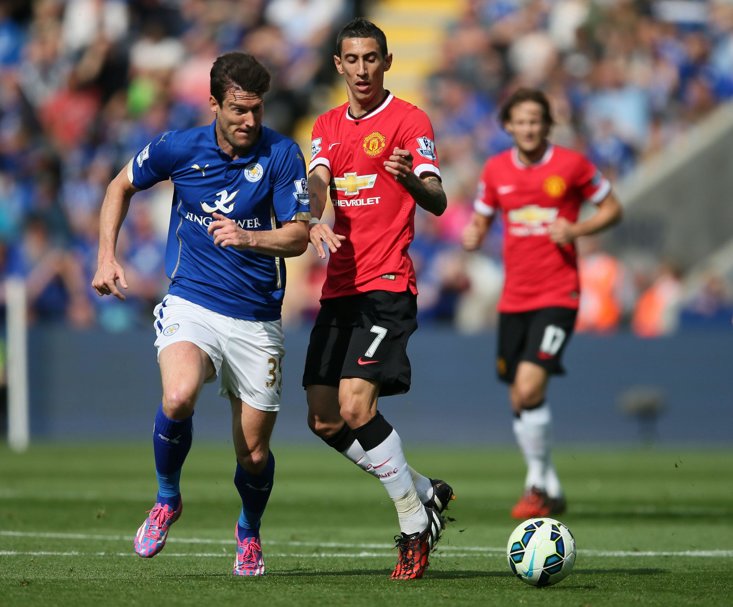 By the time Leicester City visited Old Trafford in May of the following season, they were on the cusp of the Premier League title. They did not quite seal that historic achievement at Old Trafford, where they drew 1-1 before being applauded off by both sets of supporters. But the fact Claudio Ranieri’s men held their nerve at the Theatre Of Dreams to keep their title bid on track was recognised as an important step towards the trophy.

Leicester had also managed to erode a little bit of United history earlier in the campaign, when Vardy surpassed Ruud van Nistelrooy’s record for scoring in the most consecutive Premier League games. The great Dutchman had netted for 10 games in a row, with Vardy scoring thirteen goals across 11 games. The Old Trafford club would gain a measure of revenge at the advent of the following season, winning the Community Shield with a 2-1 Wembley win over Leicester.

The crux of this thoroughly modern rivalry over the course of the last two seasons has been the race for the Champions League places. United faced Leicester in what was essentially a top-four play-off in the final game of last season. On that day, the formerly-dominant Red Devils played the gatekeepers to Leicester’s plucky attempt to return to the competition they’d last graced in 2016/17. A Bruno Fernandes penalty settled United’s nerves, before Jesse Lingard scored a second in injury time. Leicester had spent 298 days of the COVID-extended season in  a Champions League spot, only to be cruelly denied at the final hurdle. 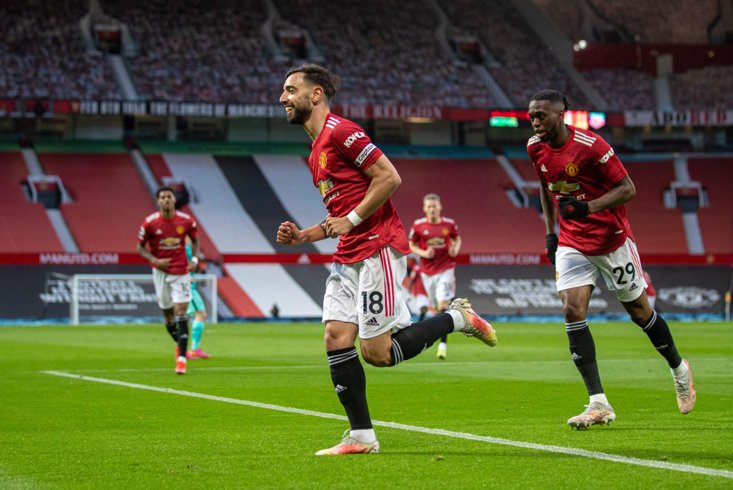 BRUNO FERNANDES SHOT UNITED TO THE CHAMPIONS LEAGUE IN 2020

The balance would tip back in Leicester’s favour last season. While United finished second to the Foxes’ fifth, the head-to-head battle told a different story. Ole Gunnar Solskjaer’s men failed to win either of their league meetings with Brendan Rodgers’ side, drawing one and losing the other. The FA Cup was the most memorable battleground they shared though. Manchester United were without a trophy since 2017’s Europa League triumph, and were targeting an FA Cup to try and break their duck. Leicester had other ideas, comprehensively beating United 3-1, with former Man City striker Kelechi Iheanacho netting twice. The Foxes went on to win the whole tournament, while United fell in the final of the Europa League to make it four seasons without a trophy.

That is perhaps the finest summation of this new footballing rivalry. While United have been in various stages of flux since Sir Alex Ferguson retired in 2013, Leicester City have improved. While United have incrementally lifted themselves out of their funk under Solskjaer, The Foxes have taken a giant leap from Premier League new boys to champions, FA Cup winners and top-six fixtures. Leicester have improved while United have broadly regressed, leaving these giants old and new to meet each other in the middle, battling for the same prizes. Neither look likely to challenge for the title again any time soon, but the European places and domestic cups are a realistic target for both. This should lead to many more important fixtures in the new City and United.