For nearly a decade now, Celtic have held the upper hand. They have been able to find fun in Rangers’ misfortunes while clinching a record-equalling nine titles in a row in the process. As the Gers languished in the lower divisions after going into administration, the Bhoys lifted title after title after title.

The 2020-21 campaign was their chance to make it 10, but it has proven to be a complete disaster. Steven Gerrard and his Rangers team have stormed to the top of the table, winning 26 matches so far and losing not a single one. Celtic, meanwhile, have lost four and trail their rivals by 18 points with only eight games left to play. Now everybody is laughing at Celtic, and if you’re the manager when that happens, you simply have to go. And go he did. On Wednesday morning, Neil Lennon resigned as Parkhead boss.

For months, sections of the support have urged the club to sack the former Bhoys midfielder, but in the end he has left of his own accord. Perhaps the reason that Celtic decided not to relieve him of his duties was because Lennon is a man who lifted five titles as a player for the club and five more as manager. They know he is a winner, and will have hoped he could turn it around. However, perhaps it was doomed from the start. 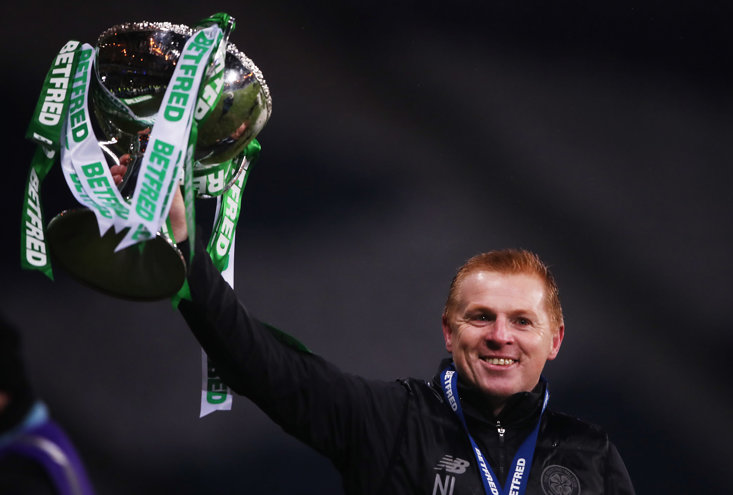 LENNON WON A GLUT OF TROPHIES WITH CELTIC

Lennon was in charge of the club between 2010 and 2014 before returning in 2019. In between his two spells, he managed Bolton Wanderers, themselves going through turmoil off the field, and later Hibernian. The fact he was reappointed initially on a short-term deal says a lot. At the time, they didn’t see him as the future answer but gave him the job permanently after he guided the club to an unprecedented domestic triple treble which had been largely overseen by Brendan Rodgers before he departed for Leicester City.

Since then, things just haven’t gone to plan, or rather haven’t gone as perfectly as Celtic’s previous nine campaigns. The standards are so high at Parkhead that slip-ups won’t be accepted by the fanbase.

The Northern Irishman oversaw defeats by Ross County in the Betfred Cup and again in the league two days ago, as well as a Europa League trouncing at the hands of Sparta Prague.

Lennon, along with 15 other staff members and players, was forced to self-isolate after Christopher Julien tested positive for Covid-19 following a controversial club trip to Dubai. Hitting out at the government and SFA did not go down well.

His opposite number at Rangers, Steven Gerrard, said of the news of Lennon’s departure on Wednesday: “I can’t say I’m surprised because of what’s been going on over there this season.

“I obviously take no personal satisfaction from seeing that news for Neil or any other manager that happens to. I wish him well for the future.”

It’s business as usual for Gerrard, and the wider football world wasn’t shocked by the news either. Celtic, however, have been in crisis for months, it feels. Winning didn’t exactly paper over cracks but perhaps allowed them to take their foot off the pedal. Only now Lennon has resigned can they take stock because they were sleepwalking further and further behind Rangers.

In time, perhaps, there will be a wider appreciation for what Lennon achieved at Parkhead, but right now the parting is simply an inevitable conclusion.