The frosty relationship between former-heavyweight champions Lennox Lewis and Anthony Joshua appears to have hit a breaking point after the latter labelled Lewis a “clown.”

The ‘feud’ between the two has been building for some time now with AJ previously drawing criticism from the last undisputed heavyweight champion of the world, for “chasing the money” and for not ditching long-time trainer Rob McCracken following his devastating loss to Andy Ruiz Jr. in June.

'Me and Lennox are not the same. My legacy is to sit back and enjoy the younger generation coming up, and not to be involved. Just to appreciate what it takes to get there.”

It didn’t take long for Lewis to respond to the barb and he placed some blame on Joshua’s promoter, Eddie Hearn, who, he claims, is portraying him as a “jealous hater” in a bid to boost AJ’s career.

Speaking on Twitter he said: “Wow! He’s right! We ARE cut from a different cloth. Undisputed wasn’t something I “worried” about. It was something I went after until it was accomplished!”

He added: “Disappointed in AJ’s words but I understand that this “jealousy” narrative was only fabricated AFTER I criticized them for Wilder negotiations. All of the sudden I’m a hater. Ask who benefits from such a simple-minded narrative? Not AJ. Not me.”

Lennox Lewis
@LennoxLewis
I think this speaks for itself. Casting me as a “jealous hater” for AJ's career is nonsense. It all started with rightful criticism for not doing enough to make wilder fight happen. I won't be pitted against AJ. #TheHearnAgenda 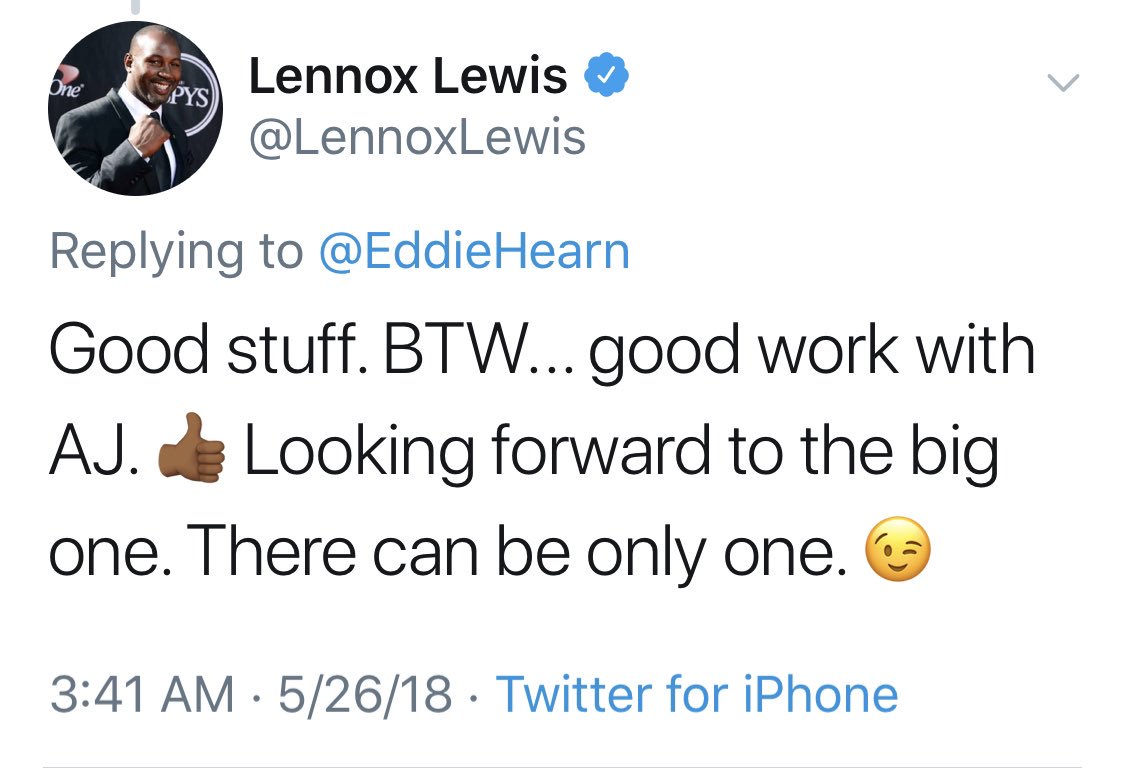 Meanwhile, Joshua looks set for a rematch with Andy Ruiz Jr on December 7 but despite claims the bout is set for Saudi Arabia, Ruiz is adamant the fight will be held Stateside.

Speaking on Instagram yesterday, the IBF, WBA, WBO and IBO champion said: "Of course [I'm taking the rematch] but it's going to be on our terms; we're going to bring it back to the United States."

Hearn responded by saying that the 29-year-old could face legal action if he doesn’t accept the terms.

More
boxing
Eyes On The Prize: What We Know About Iron Mike Tyson’s Boxing...
The sporting world has been caught up in Mike Tyson fever since the former world heavyweight champion, [ ... ]
boxing
Tyson Fury Wants To Help You Transform Your Mind And Body With...
WBC heavyweight world champion Tyson Fury will be sharing his secrets for staying in fighting-fit shape, [ ... ]
boxing
UFC President Dana White Urges Mike Tyson To Reconsider Ring...
UFC chief Dana White has urged his close friend Mike Tyson to reconsider a return to boxing at the age [ ... ]
boxing
Holyfield's Ring Return And Four Other Boxing Stories You Might...
Coronavirus may have played havoc with the 2020 boxing calendar for the foreseeable future but that [ ... ]
boxing
No Spit Buckets And No Fans Among BBBofC Proposals To Bring...
Boxers will have to walk to the ring in protective masks and without their trusty spit buckets if the [ ... ]
boxing
Mayweather vs Pacquiao: Five Years On From A Fight That Was...
In an ideal world, we would be celebrating the tenth, maybe even eleventh anniversary of Floyd Mayweather [ ... ]
boxing
Iron Mike’s Return And Four Other Boxing Stories You Might Have...
Coronavirus may have played havoc with the 2020 boxing calendar for the foreseeable future but that [ ... ]
boxing
How Hearn's Virtual Press Conference Dream Reignited Froch's...
When promoter Eddie Hearn declared that Joe Calzaghe and Carl Froch topped his list of the dream boxers [ ... ]
boxing
Joseph Parker's Popularity Skyrockets And Tyson Fury Is Partly...
Few boxers have seen their stock rise so highly without having set in foot in the ring as former WBO [ ... ]
boxing
At 48, Shannon Briggs Follows Paulie Malignaggi Into Bare Knuckle...
In the least surprising story of 2020, two-time heavyweight boxing world champion Shannon Briggs has [ ... ]
boxing
Looking Back At Amir Khan's Five Best Performances As Retirement...
Amir Khan’s 16-year professional career may be nearing its conclusion but the 33-year-old is adamant [ ... ]
boxing
George Foreman Says Deontay Wilder Will Beat Tyson Fury And...
Former two-time world heavyweight champion George Foreman has stepped in to give Deontay Wilder some [ ... ]
boxing
Fight Fans Rejoice! Canelo And Golovkin In Talks For September...
Mexican superstar Saul ‘Canelo’ Alvarez and Kazakhstan’s tough-as-nails Gennady Golovkin [ ... ]
boxing
Usyk Aiming To Be The Spanner In The Works For Potential Fury...
Oleksandr Usyk is the man looking to ruin the biggest fight in British boxing history and scupper any [ ... ]
boxing
After Defeat To Tyson Fury, Deontay Wilder's Aura Of Invincibility...
Former Mike Tyson trainer Teddy Atlas has compared Deontay Wilder to a ‘spoilt brat’ insisting [ ... ]
boxing
Dereck Chisora Sees A Big Mountain To Climb Against ''Boy’s...
Amongst the headlines of Corona-this and Corona-that, you might have missed the announcement of a blockbuster [ ... ]
boxing
Usyk, The Ultimate Road Warrior, Will Relish Fighting Chisora...
The supremely-gifted Oleksandr Usyk will visit these shores once more as he looks to defend his unbeaten [ ... ]
boxing
Former US Marine Stands In The Way Of Frampton Becoming Three-Weight...
Carl Frampton is looking to become a three-weight world champion this summer as a fight with WBO [ ... ]
boxing
Jono Carroll Promises To Break Scott Quigg's Heart Ahead Of...
This weekend, the Manchester Arena will welcome a tasty super-featherweight clash between [ ... ]
boxing
Taylor Set For ''Biggest Female Fight Ever'' Against Seven-Weight...
Katie Taylor’s fight with Amanda Serrano has been billed as "the biggest female fight of [ ... ]
boxing
''If It Makes Money, It Makes Sense'' - Floyd Wants $600m To...
Floyd Mayweather has insisted it will take a whopping $600m to get him back in the ring to fight Conor [ ... ]
boxing
Tyson Fury And Anthony Joshua All Set For Cardiff In December,...
It’s the fight we all want and it may have taken a giant step closer to happening after Eddie [ ... ]
boxing
Born In Watford, Made In Nigeria: Anthony Joshua's Incredible...
2019 was arguably the most formative of Anthony Joshua’s career.  The first professional [ ... ]
boxing
Dillian Whyte Promises ''Maximum Violence'' In Manchester Showdown...
Ten months after taking the WBC interim heavyweight title with a win over Oscar Rivas, Dillian Whyte [ ... ]
boxing
Book Review: In Sunshine Or In Shadow, By Donald McRae
You may recognise the title of this book. You may even have belted it out yourself.  “In [ ... ]
boxing
Scott Quigg Eyeing Two-Weight World Title Shot After Jono Carroll...
Former WBA world super-bantamweight champion Scott Quigg says he’s treating Saturday’s Manchester [ ... ]
boxing
Deontay Wilder-Tyson Fury III To Happen ''Before The Olympics''
Tyson Fury is set to face Deontay Wilder for a third time before this summer’s Tokyo Olympics [ ... ]
boxing
Tyson Fury Gives ''Mate'' Joseph Parker Heavyweight Advice Ahead...
Joseph Parker backed the right horse. The former WBO heavyweight champion chose Tyson Fury to overcome [ ... ]
boxing
Could Boris Johnson Really Be The Man To Make AJ Vs Fury Happen...
Boris Johnson has a lot on his plate right now, he is the Prime Minister after all. Having won the general [ ... ]
boxing
Eddie Hearn Braced For A ''Mexican War'' As Mikey Garcia And...
Eddie Hearn says he is expecting a “Mexican war” this weekend when Mikey Garcia and Jessie [ ... ]
This website uses cookies
Cookies help us and our partners provide statistics. By browsing this website, you consent to the use of cookies in accordance with our Privacy Policy and Cookies Policy.
Accept & Close