Football
News
The former Manchester United captain has spoken about a clash with the Danish goalkeeper
Neil Goulding
14:00, 24 Feb 2022

Roy Keane has never been a shrinking violet.

But the Irishman has revealed he once had a brutal hotel bust-up with Peter Schmeichel.

The Manchester United legends had a late-night fight in a corridor, which left shot-stopper Schmeichel nursing a black eye.

“When I was injured and I came back Peter didn’t want to give me the captaincy so there was a bit of tension between us,” revealed Keane.

“Good tension. We don’t like each other but I’m glad you’re my goalkeeper, you know what I mean.

“We were on pre-season, drinking as usual until three or four in the morning I said something to Peter and he was waiting for me outside of the room.

“I came out of the room and Peter’s waiting and he says ‘I’ve had enough of you!’.

“I remember I was coming round and I was thinking ‘you’ve had enough of me? Let’s get it on’.

“Obviously we had a fight. It seemed like ages, but I’m guessing it was like two or three minutes.

Keane and Schmeichel celebrated unprecedented success at Old Trafford despite their infamous fight.

But their competitive spirit pushed them further than they’d both have liked, even though it was Irishman Keane who landed the telling blow.

“Believe it or not Nicky Butt was involved, Butty’s always on the scene. If something’s going on Nicky Butt’s there somewhere,” recalled Keane. “Good or bad he’s on the fringes — sort of like when he played.

“The next morning, I’m rooming with Denis Irwin, and this is the funny bit because we’re late for the bus.

“Denis Irwin is the most straight guy, I reckon he still goes to Mass every Sunday, so straight.

“Denis is going ‘Roy, we’re late’ and I’m saying ‘Denis, f**king shut up will you. You’re giving me a headache’.

“We’re getting our bags ready, he’s shouting at me and my hand was really sore. I said to Denis ‘I’m sure I was fighting last night, but I can’t remember’.

“We get on the bus and Ferguson’s going mad. I get to the back of the bus and ask Butty what happened.

“I say ‘I vaguely remember, was I fighting with Peter?’ And Peter had glasses on and this is early in the morning.

“We land wherever we go on to. There’s a press conference and two players had to do it and it was me and Peter.

“Eventually Peter takes his glasses off and he’s got a bit of a black eye.

“Ferguson pulled us when we got back to Manchester; he was mad and said ‘the two of you are a disgrace to the club and you’re going to get fined’.

“He says Sir Bobby Charlton was on the same floor as us and said we were a disgrace. I was thinking he could have broke the fight up!”

However, Keane, who recently snubbed a return to management with Sunderland, stressed: “Honestly, we had a great dressing room. Peter’s held his hand up since, again it was a late night believe it or not. It’s never over breakfast is it.

“To be fair to Peter, I’ll give him a little bit of credit, he said ‘gaffer, gaffer, it was my fault, I was waiting for him’. So he took the fall for it and after that we were okay.

“It was good to get rid of that tension between us. It was a good fight.” 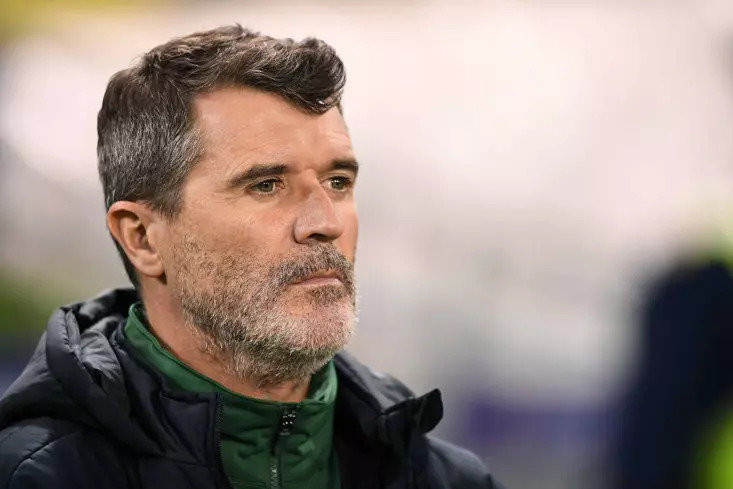 But Keane believes his bark is worse than his bite.

The talismanic midfielder has not managed a club since leaving Ipswich in 2011.

Keane has worked closely as Martin O’Neill’s assistant with the Republic of Ireland and, latterly at Notts Forest, his last job in management in 2019.

But the 50-year-old Irishman has stressed his CV does not warrant the United job and the perception of him as a “grumpy” and volatile boss is not warranted.

“Believe it or not I was actually quite relaxed as a manager, I was really relaxed,” said Keane. “I didn’t lose it a lot with the players.

“Particularly at Sunderland because we had a decent group of lads. We lost a lot of games, but we had decent lads and they always had a go which was, honestly, all that ever interested me.

“Even at Manchester United and, even with all the perception of me, I didn’t do much shouting.

“You need examples. When I came to England I went into a [Nottingham] Forest dressing room with players like Stuart Pearce, Des Walker and Nigel Clough, so I always had good players around me who I thought ‘is that how you’re going to behave if you’re going to be a footballer?’.

“I’m not saying these lads had halos above their heads, but I just like the standard they set.

“It was the same at United, I just loved the senior players, who I felt were all pretty decent lads.

“They set a standard at United – and I just tried to pass that on. I definitely wasn’t as stiff as everybody thinks I was.”

This interview was done in conjunction with Sky Bet and Gary Neville’s new show ‘The Overlap’.