Hate it or love it, you cannot ignore it.

That's the perfect summing up of the stunning outfit Tyson Fury wore to Monday's press conference with Deontay Wilder in Las Vegas.

The two heavyweight giants fight for the second time in an eagerly anticipated clash on February 22.

And if there's points for stealing the show, then Fury came out on top, as he showed off his very individual style by parading around in a bespoke suit adorned with images of himself. The astonishing white linen number, with matching shirt, was plastered with pictures of Fury holding up the world heavyweight belts he once owned. And even included a snap of him rising off the canvas following a brutal 12th round knockdown by Wilder in their first fight.

Nav Salimian is the man behind the suit. He's been Fury's tailor for the last five years and his entire requisite is to ensure Fury steals the show. He can consider it job done

Marketing Director and Stylist for Claudio Lugli in London, he was first tasked with making sure Fury looked the business ahead of his fight against Wladimir Klitschko.

However, it didn’t go as expected.

“I gave him a three-piece checked suit with a 1950s bowl cut to give him that Mafioso, Al Capone style,” he explained in an exclusive interview with The Sportsman.

However, when Fury appeared for his pre-fight presser, he was dressed as film and comic hero Batman in one of the most iconic boxing images this century.

“I was sitting on the second row near his wife and I was gobsmacked. I was thinking ‘Oh my God, I’ve come all this way, I’ve done all this work and he’s not even wearing the suit!’"

He had to ask had he even packed it? Nobody knew.

However, luckily, Fury’s stunt gained Sailiman’s work even more exposure, with the Wythenshawe-born fighter eventually swapping to Batman's alter-ego, Bruce Wayne, in the smart suit after all. 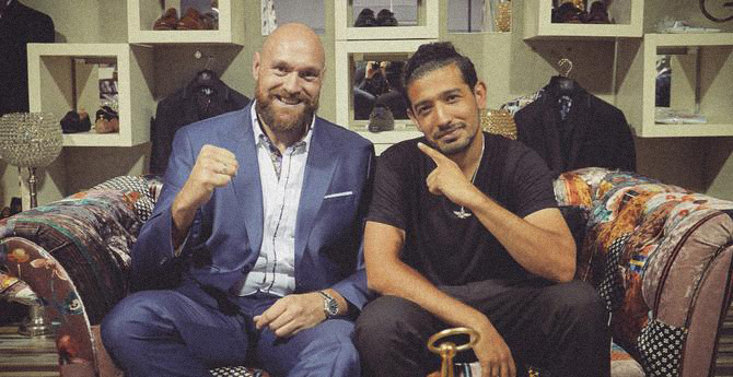 Standing at a whopping 6’9”, Fury is no usual client.

Catching the eye of the boxer after working with names including Amir Khan, Conor McGregor and Michael Bisping, Salimian was invited to promote his brand at Fury’s Lancaster home and knew this task would be different to past projects.

“I hadn't met him before but obviously the size of the man was something very much in the back of my mind,” he admitted. “It’s always going to be a challenge when working with someone of his stature - one of the longest reaches in boxing, sleeve length, waist, length of the trouser, all of these things have to be taken into account.

“Of course the first suit wasn’t going to fit bang on but it’s something we were able to manoeuvre. It was fun and challenging at the same time, he knew there was a lot of work to be done with the garments but when he put it on he immediately felt it was a bit of him.”

Fury’s mental health problems have been well documented as has his weight fluctuation during his time away from boxing.

It’s testament to the boxer that he is in such great shape and gearing up for another heavyweight title fight having spoken so openly about his mental struggles with searing honesty.

Salimian, who has used suit sales to raise money for mental health charity MIND, revealed his modus operandi is to boost Fury, to make him feel ten feet tall.

“The weight is something we really, really had to think about,” he admitted. “The times during his lowest points, he was very heavy at a certain point.

“Right now he’s the most trimmed and lightest he’s been in regards to our measurements and fittings but obviously it was challenging.”

I look at our garments and see them to provide him with two to five percent more confidence.

“There may have been a time when he didn’t feel confident within himself because of the nature of his mental health battles. Now, he’s the best he’s ever looked and the garments give him more confidence going into the fight."

Working as a collaboration, they’ve grown to know each other well and Salimian knows exactly what chord to strike with his designs. The more outlandish the design the better in many cases.

“I will give ideas back and forth and he will give us the nod of approval but, because of our five-year relationship, we’re at the stage where we understand what the other likes.

“My initial designs were quite sharp and serious for the press conference for a big world title fight but the more you know someone, you gauge their sense of humour, character, personality and I realised very very quickly he has a great sense of humour and playful nature.

“We’re very bold with our colours, our prints, playful in our designs. As his journey developed in terms of crossing over to the States, the Showbiz element, making a statement, he very much wanted to up the ante, that was his direction with regards to stepping up the designs and looking to steal the show with every element, in and out of the ring.

“He’s always open to change, to freshen things up; you’ve seen it with his trainer, with his camps.

“That's what I love about working with Tyson, he makes it fun but at the same time, we’re very serious about our designs and craft and he’s very serious about what he does in the ring so we combine the quality. That’s where it works as a partnership.”

Salimian has produced some astounding pieces for Fury to wear and one piece, in particular, blew him away.

“He believes he is the greatest heavyweight boxer so we did a suit where we hand-drew all of his iconic images alongside champions so he was among the greats, along with his personality, his history, his message.

His face next to Mike Tyson, Lennox Lewis, Joe Frazier and George Foreman among the Mount Rushmore of boxing on that suit - when I first unveiled that to him there was a real reaction of shock.

Now part of Fury’s close-knit team, Salimian goes above and beyond and will be there in Vegas.

“I’ve attended all the fights since Klitschko,” he said.

“I wouldn’t say I’m ringside but I’m very close to it. I have good seats and good access around fight week and help him and the family.

“I’m on hand, not only as a stylist but whatever they need.

“He looks after his team very, very well. I’ve always been looked after and made to feel welcome.”

Of course, ahead of his next fight, Salimian and Fury have more suits lined up their sleeve.

While they are certain to stand out, the look will always be powerful and meaningful.

“I think we're pushing the envelope with designs all the time. I don’t second guess myself or the brand but I wonder what the global and world reaction will be and more times than not, I’ve been happy with the reaction.

“You can’t win them all, hate it, or love it, you cannot ignore it. Tyson has a very infectious energy around him and people are drawn in either way.”

We can’t wait to see the next creation.