Motorsport
News
It was a dramatic finish as the rain came in from the Black Sea
Simon Lillicrap
15:01, 26 Sep 2021

Sir Lewis Hamilton has made history to become the first person to win 100 Formula One Grands Prix after an incredibly dramatic finish in Sochi, as rain soaked the track over the final five laps and took the win away from the sensational Lando Norris.

The two Brits battled it out for a race win over the final 15 laps at Sochi and it was a fight we were all desperate to see. One was targeting his first race win in the sport, the other chasing a century of first place finishes as McLaren’s Norris held off the title chaser, Hamilton.

The future teammate of the seven-time champion had led the Grand Prix for a hefty amount of time and even when Hamilton had fought his way through the pack to within two seconds, he kept his cool. Norris responded with a fastest lap as the grey clouds gathered above him.

With seven laps to go the ponchos came out in the stands as the rain began. Norris ran wide as Hamilton seriously closed the gap to less than a second as the racers defiantly stayed out on the track. As the majority of the field pitted, Norris and Hamilton played a game of chicken.

When asked by his team if he wanted to come in to change onto the intermediates, Norris shouted “NO” over the radio as he stayed out on the track, while Hamilton thought about following him, but was told by Mercedes the rain would get worse. That decision won Mercedes the Russian Grand Prix as the rain came in from the Black Sea.

Norris, who was within touching distance of his first race win, and had a 30 second lead over his countryman, could barely control his car on the wet stuff. That lead evaporated in double quick time as Hamilton easily passed him as he attempted to avoid hitting the walls. 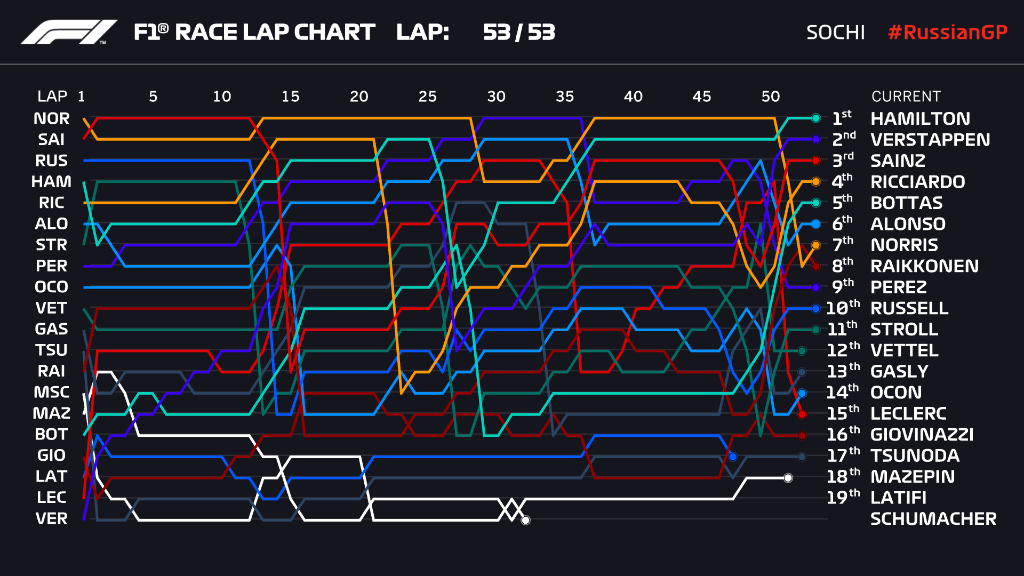 “Fantastic call on the tyres,” Hamilton said to his team having secured a century of wins, while he embraced an emotional Norris in the pits. “Lando did such an amazing job, he had such great pace. I didn’t want to let Lando go but I'm incredibly grateful for the men and women on the team.”

It was an incredible win for Hamilton as Mercedes continued their Russian dominance, but title rival Max Verstappen had a phenomenal race, coming from 20th place to finish second. His Red Bull team also made the right decision on tyres which allowed Verstappen to battle his way through the pack and keep any damage Hamilton could impact upon him to a minimum. That now puts Hamilton back on top of the drivers’ standings, just two points ahead of the Red Bull driver, who will be delighted with the outcome of the weekend.

Ferrari’s Carlos Sainz came home in third, McLaren’s Daniel Ricciardo in fourth, Valtteri Bottas in fifth and Fernando Alonso in sixth. After racing almost the perfect race, Norris was left to come to terms with a seventh place finish. The praise from Hamilton will mean a lot, but the heartbreak of being just three laps away from a race win will be tough to get over.

But he will be back. McLaren have shown time and time again this season that they can be competitive, while the prospect of Hamilton racing alongside Norris in the same colours next term is mouth-watering.

100 Formula One wins for the greatest of all time.