Boxing
News
Here's everything you need to know ahead of this weekend's 'Battle of Liverpool'
Kieran Spratt
13:58, 04 Oct 2021

There’s a monster match-up on Merseyside this weekend when Liam Smith and Anthony Fowler go head-to-head in a mouthwatering super-welterweight clash dubbed ‘the Battle of Liverpool.’ Here’s everything you need to know.

Liam Smith vs Anthony Fowler takes place on Saturday, October 9th. The show starts at 7pm and the main event is expected to get underway at around 10pm.

The fight will take place at the M&S Arena in Liverpool. Both men have fought multiple times at the venue. Fowler last fought here in 2019, beating Harry Scarff by unanimous decision, while Smith was there earlier the same year, beating Sam Eggington by TKO.

Smith v Fowler and its undercard will be shown live on DAZN. The streaming service costs £7.99 per month for subscribers.

Liam Smith: “I’m confident that I beat Anthony Fowler every day of the week and twice on Sunday. If I turn up at 100% then I beat Anthony Fowler. The way I see the fight going, it’ll be competitive early doors and then experience, cuteness and everything else will come on. I’ll stop him down the straight.” 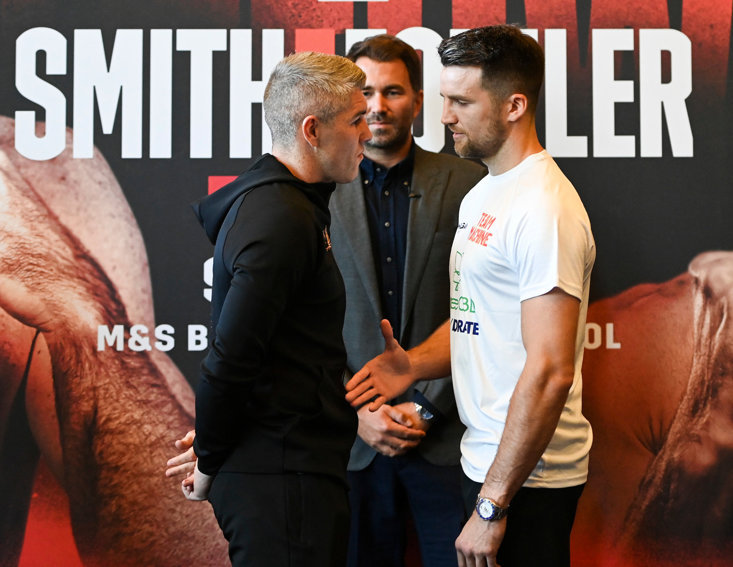 Anthony Fowler: “This is a dream come true, I’ve always wanted to be the main event in Liverpool and for this to come true is great. I’m under no illusions I’m up against it, Liam is a top, world class fighter, he’s proven that. But I’m 30 years of age, I can’t sit around and wait for these fights that aren’t getting made so I need to roll the dice. I’m confident, I’m at my peak, my best and I’ll be at my best come fight night.

Eddie Hearn: "This is the biggest night of boxing we've ever put on in Liverpool. The biggest Saturday night fight card we've put on since I've promoted boxing.”

x
Suggested Searches:
Manchester United
Liverpool
Manchester City
Marcus Rashford
Premier League
More
boxing
Weekend's Boxing Provides A Fight Of The Year And Upset Of The...
An Upset of the Year contender, a Fight of the Year contender and a big night in Newcastle for British [ ... ]
boxing
On This Day In 1987: Tyson Brings The 15-Round Era To A Brutal...
On this day in 1987, boxing changed forever, as the last ever 15-round world heavyweight title fight [ ... ]
boxing
Brawl On The Tyne: Fury, Marshall And Chris Eubank Jr Descend...
Unbeaten Savannah Marshall makes the second defence of her WBO middleweight championship this Saturday [ ... ]
boxing
Mixed Week For The Eubanks: Five Boxing Stories You Might Have...
Boxing never sleeps, and with Fury-Wilder III in the rearview, attention has turned to exciting fights [ ... ]
boxing
Haye At 41: The World Title Wins That Defined ‘The Hayemaker’
Former two-weight world champion David Haye turns 41 today. ‘The Hayemaker’ is unfairly [ ... ]
boxing
''You Big, Stiff Idiot!'': The Wit And Wisdom Of Tyson Fury
Not content with being the most able heavyweight fighter on the planet, Tyson Fury is also a supreme [ ... ]
boxing
The King’s Gambit: Who Should Tyson Fury Fight Next?
‘The Gypsy King’ has the world at his feet after solidifying his claim to the throne with [ ... ]
boxing
Retirement Or Fight His Way Back: What Happens Now To Deontay...
Deontay Wilder’s stock amongst the boxing community managed to both rise and fall on a damaging [ ... ]
boxing
Tyson Fury Retains Heavyweight Titles In Incredible Trilogy...
The first fight was a resurrection. The second was a demolition. Tonight, Tyson Fury’s 11th-round [ ... ]
boxing
LIVE Tyson Fury v Deontay Wilder 3
Morning all! What are you doing up at this time? It's Tyson Fury v Deontay Wilder. Again! The WBC [ ... ]
boxing
Merseyside Derby: Experienced Smith Awaits For Hungry Fowler
Liam Smith takes on Anthony Fowler this Saturday in a battle for Liverpool supremacy. The former world [ ... ]
boxing
Whyte Lined Up For Fury/Wilder Winner, Five Boxing Stories You...
Ahead of a blockbuster weekend in boxing in the ring, it’s been a pretty busy week out of it. [ ... ]
boxing
The Man Who Beat The Man: Tyson Fury On The Lineal Championship
When Tyson Fury walks to the ring to face Deontay Wilder on Saturday night, he will have two belts in [ ... ]
boxing
Fury vs Wilder III Undercard Preview: Heavyweight Heaven In...
It’s heavyweight heaven this weekend in Las Vegas as not only will fight fans be treated to Tyson [ ... ]
boxing
“I Look At Deontay Wilder Like He’s Stupid” - The Tyson Fury...
“Boxing is not rocket science. It’s me going in there, punching a man's face in. That's [ ... ]
boxing
Happy Birthday, Micky Ward: Remembering The Gatti War That Launched...
The word warrior is thrown around so readily in boxing, it has lost some of its impact. While every [ ... ]
boxing
On This Day In 1998: Floyd Mayweather Wins First Ever World...
“We believe in our heart of hearts that Floyd Mayweather is the successor in a line that starts [ ... ]
boxing
Undercard? When? How To Watch? Everything You Need To Know About...
Tyson Fury and Deontay Wilder go head-to head for a third time next weekend, with The Gypsy King’s [ ... ]
boxing
UK First Choice For AJ Vs Usyk Rematch, Five Boxing Stories...
There’s news on where Anthony Joshua’s rematch with Oleksandr Usyk could land, a modern [ ... ]
boxing
Rebuild And Reclaim: Why Anthony Joshua Needs A New Trainer
Anthony Joshua looked bereft of ideas as Oleksandr Usyk boxed, moved and pounded his way to a unanimous [ ... ]
boxing
My Name Is Prince: 26 Years Since Naseem Hamed Won His First...
26 years ago today, a Prince was crowned king. ‘Prince’ Naseem Hamed stopped Wales’ [ ... ]
boxing
Eubank Statement: Junior Can Be The Face Of Sky Sports Boxing
Chris Eubank Jr takes to the ring this weekend as the new crown jewel of Sky Sports’ boxing coverage. [ ... ]
boxing
Keep Moving Forward: How ‘AJ’ Can Learn From Lennox The Avenger
Anthony Joshua, the dethroned three-belt king of the heavyweight division, sat stoically in the post-fight [ ... ]
boxing
Oleksandr Usyk Puts In Boxing Clinic Against AJ To Take Heavyweight...
You’d be forgiven if you’re starting to grow a little weary of hearing ‘Sweet Caroline’ [ ... ]
boxing
Okolie Cruises To Victory In First World Title Defence On AJ...
The first defence of Lawrence Okolie’s WBO cruiserweight crown ended swiftly on the undercard [ ... ]
boxing
The Rebuild Begins For Callum Smith As He Steps Up To Light...
Callum Smith was the best super middleweight in the world. The Liverpool fighter was the latest outstanding [ ... ]
boxing
Anthony Joshua Weighs In 19lbs Heavier Than Usyk Ahead Of Heavyweight...
Anthony Joshua has weighed in at 240lbs ahead of his heavyweight showdown with Oleksandr Usyk this weekend, [ ... ]
boxing
Okolie Is The Latest In A Proud Line Of British Cruiserweight...
Anthony Joshua will not be the only British world champion stepping into the ring at the Tottenham Hotspur [ ... ]
boxing
Anthony Joshua vs Oleksandr Usyk Is Fight Of The Year, Says...
Ahead of Oleksandr Usyk’s heavyweight showdown with Anthony Joshua at the Tottenham Hotspur Stadium, [ ... ]
boxing
From Mike Tyson To Mr. Dream, How Punch-Out!! Defined Boxing...
Only 55 men truly know what it is like to face ‘Iron’ Mike Tyson. But a generation of gamers [ ... ]