Boxing
News
The undisputed lightweight showdown is expected to draw over 50,000 fans to the Marvel Stadium in Melbourne
Joey Mills
06:55, 04 Jun 2022

There has been some pre-fight dispute over the undisputed tag. The complication has arisen due to the involvement of Kambosos’ WBC Franchise belt. The Australian holds the WBA, WBO and IBF titles at 135lbs, but in beating Teofimo Lopez in a mammoth upset last November he also captured the WBC Franchise gong. Lopez had referred to himself as undisputed champion, and Kambosos has adopted the same mindset, complaining to the press that his status as four-belt ruler is unrecognised. The Franchise title is not a legitimate world title however, and is one of many extraneous and gaudy awards the WBC pointlessly hands out. The genuine WBC lightweight champion is Devin Haney, and the winner of this match-up will be the legitimate undisputed champion at the weight.

With the mind-numbing boxing politics out of the way, it must be said what a brilliant fight this is on paper. Lightweight is perhaps the mightiest division in boxing today, with depth and quality to be found in abundance. The fact Kambosos was willing to face a challenger as good as Haney coming off the win over Lopez should be applauded. After coming through one of the fights of 2021 against ‘The Takeover’, nobody would have judged the ‘Ferocious’ one for taking a softer touch in his Australian homecoming. Haney too has risked it all in taking this bout. The WBC boss is 27-0 and at just 23 years old, he could have afforded to pad his record a little longer rather than face the best lightweight around today.

Haney has to overcome more than just Kambosos when the pair step into the ring at Marvel Stadium on Saturday. Haney’s father and coach, Bill Haney, will not be in his corner as he faces the toughest test of his career. The trainer is banned from entering Australia due to a felony drugs conviction in 1992. Another famous boxing father, former welterweight king Zab Judah’s father Yoel, will now lead the corner. It is a disruptive occurrence Haney didn’t need going into such a huge fight. 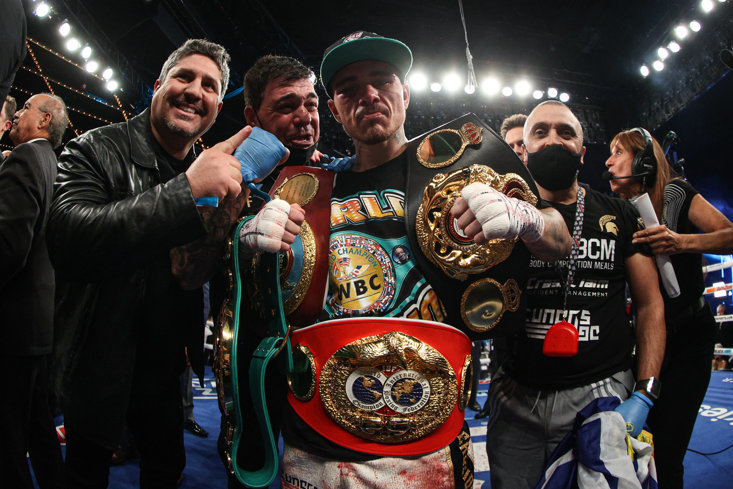 It is still a fight he’s expected to win. Kambosos showed tremendous heart, grit and determination when shocking the world against Lopez. But Haney has been a phenomenon since turning pro in 2015. Since becoming champion, his level of competition has risen and Haney himself has ascended to meet the challenge. His last three opponents were a trio of ex-world champions. Yuriorkis Gamboa, Jorge Linares and Joseph Diaz Jr have all been defeated by ‘The Dream’. But Kambosos is another big step up, being closer to his prime than the respected but aging warriors Haney has been feasting on.

This is a point where the Australian can claim to have the advantage. While Haney is a world class talent, he is arguably not the best fighter Kambosos has been in the ring with. Teofimo Lopez was coming off a win over the great Vasiliy Lomachenko and had previously won the IBF lightweight belt by blasting champion Richard Commey out in two rounds. It was thought Lopez would become a staple of the pound-for-pound list until he ran into Kambosos. In one of the most memorable fights of recent years, the Australian broke down, befuddled and then beat the Brooklynite over twelve gripping rounds. The split decision verdict gave an impression the fight was close, but Kambosos’ victory was more comprehensive than the cards suggested.

Now he must find a way to do it again. History is littered with boxers who could never recapture their hunger after one huge upset win. If Kambosos is to avoid comparisons to James ‘Buster’ Douglas, Hasim Rahman, Andy Ruiz Jr and Randolph Turpin, he badly needs to win in his own backyard. Champions are made in one night, but legends are made over the course of careers. Kambosos must bring the ferocity his nickname suggests and deliver another performance like his Lopez masterpiece to take home the undisputed title.

The Marvel Stadium is an appropriate stage for this epic crossover of lightweight gods. The two men have broken with modern boxing convention to put the fight on. Their belts and unbeaten records will be laid on the line with a bumper crowd in attendance. These occasions are what boxing is all about. But which man will write their name in history?