With three sides still standing in the Betfred Challenge Cup, Cumbrian rugby league is thriving, but is a merger the only realistic pathway to Super League?

It is a region of unbridled rugby league passion beyond the sport’s M62 corridor. A seemingly limitless supply line of strong young talent and three burgeoning clubs in Barrow, Workington and Whitehaven.

But not since the birth season of Super League when founding members Workington fell immediately from the top table, has Cumbria had a side competing with the big boys.

Workington head coach Chris Thorman, a proud Geordie who has guided Town back into the Championship, told me this week that the most realistic route to seeing a Cumbrian side in Super League was the dreaded merger.  Not one he was pushing for I must add, but one he could see the logic of.

“Maybe it is easier for me to talk about a merger because I’m not from the area, maybe that’s why I’m more open to it,” he admitted.

But the dreaded M word is a sickener for die-hard league fans and the murky world of the merger dictates that supporters simply won’t let the businessmen do it.

Indeed back in 1995 when Super League was born, the plan was for Workington, Whitehaven, Barrow and Carlisle to join forces as Cumbria. It wasn’t a well-received suggestion, and didn’t happen.

Steve McCormack, a former Scotland coach who enjoyed great success with his side while based in Workington for the 2013 World Cup, came very close to guiding Whitehaven to the promised land. They lost in extra-time to Leigh in the 2004 National League One Grand Final, and fell again at the final promotion hurdle a year later.

He later returned to the region for a stint at the helm with Barrow.

“I don’t think a merger will happen, and I’m not sure I agree with Chris that it would need to,” McCormack told The Sportsman. 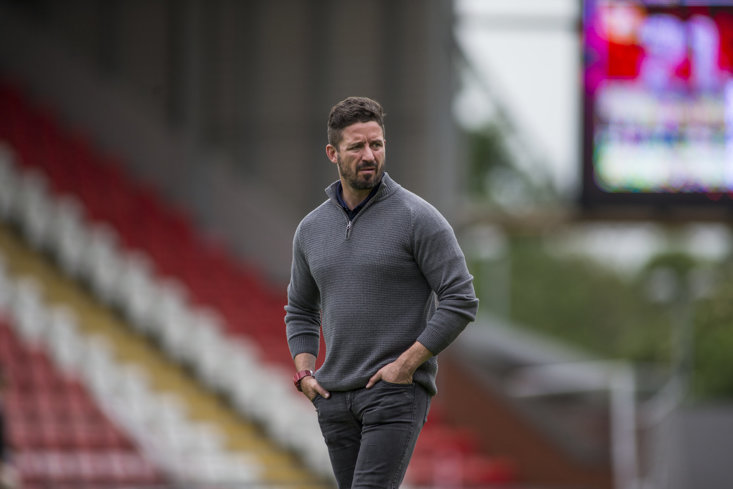 “I just think it would be too difficult. It is like saying merge Wigan and St Helens. That just won’t happen because they hate each other and love the rivalry.

“I understand people thinking that but I don’t think that’s right. The clubs have a lot of historical background and we have got close already, close but no cigar to promotion outright at Whitehaven.

“People need to get round the table and do what is best for the game up there. I do know from being involved that the area would not accept a merger.”

It is not just Cumbria where this debate has raged and then disappeared.

Hull FC owner Adam Pearson last August dared to mention mergers and the scrap he would have to convince bitter Rivals FC and KR to join forces to safeguard their financial futures.

Huddersfield and Sheffield did merge in 1999. Coach John Kear called it one of the lowest periods of his illustrious coaching career, describing how “it was billed as a merger but in reality it was a takeover.” He quit less than a season into the project, both sets of fans rejected it, and it was scrapped after a year.

Huddersfield have preserved their Super League status, Sheffield have never been back.

After resisting the clamour in 95, Castleford and Wakefield revisited the merger idea when financial worries resurfaced 15 years later. Again the logic made sense; two clubs scrapping each year for survival could instead compete as one for silverware, swapping two creaking old grounds for one swish new stadium with a squad of pooled talent, a sturdy financial backdrop and bumper crowds. Again it was resisted, both clubs have sustained their places in Super League, and could well be joined by neighbours Featherstone who are favourites for promotion this year.

“Before I went up and worked in Cumbria I was of that same opinion that a merger would be logical,” says McCormack.

“But after three or four years there I just got it. It would have been really difficult. They are three great clubs who all punch above their weight and always will so you’d hope if somebody could invest that may be the final piece. They are not far off, and it would be great to see a Super League club up there.

“Money helps, look at Toulouse, Newcastle and York building to Super League. But it is more the culture and community that is important. 2005 was unbelievable up there. And 2013 playing against Tonga and Italy with Scotland at a capacity Derwent Park just shows the appetite for rugby league up there.”

Most arguments for a merger will make sense, and will show as strong business plans on paper. But the reality is very different. Fans do not want logic and shrewd accounting.

They want their team, their community, their religion, their release.

Sport is born from passion and emotion, take that away and no brimming bank balance can replace a loss of identity.