Few strikers have been more clinical in an England shirt down the years than Gary Lineker.

In fact, no Englishman has scored more World Cup goals than the Leicester-born forward with his tally of 10 putting him above greats such as Bobby Charlton, Geoff Hurst and, more recently, Wayne Rooney.

Beginning his career with Leicester City and making his debut at just 19, he enjoyed two promotions over seven seasons as the Foxes rose from Division Two to the top-flight with Lineker netting 29 goals in the 1984/85 season alone.

Lineker had gained a reputation for his prowess in the opposition area and, combined with great pace and a poacher’s instinct, quickly became one of the hottest properties in English football.

Not surprising then that Bobby Robson would give him his first full international cap against Scotland on May 26th, 1984, to begin one of the most celebrated England careers of all time.

Lineker was finally prised away from Filbert Street by defending league champions Everton for £800,000 in 1985 with Toffees boss Howard Kendal saying of the forward; “no one could match Gary’s pace over 40 yards.”

His time with the Toffees was brief but beautiful; in just one season at Goodison Park, he scored 40 goals in all competitions as the Blues battled with Merseyside neighbours Liverpool for a league and FA Cup double, eventually being pipped by the Reds on both fronts.

His exploits in that campaign meant Lineker headed to the 1986 World Cup in Mexico as the country’s most potent marksmen having also scored the first of five England hat-tricks in a qualifying game against Turkey.

His next England hat-trick was to come in Monterrey against Poland in the final group game of Mexico ‘86 with Bobby Robson’s side knowing only a win would see them progress – three goals in the first 35 minutes highlighting Lineker’s deadly threat in the box. 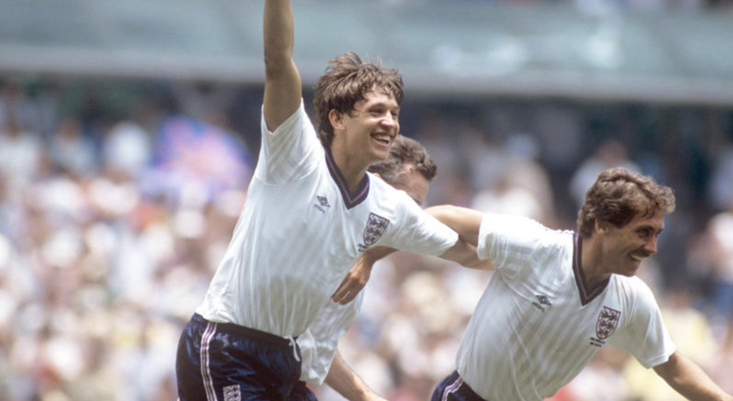 He scored again in the next round against Paraguay and then once more against Argentina in a quarter-final encounter better remembered for a memorable brace by Diego Maradona, and although England crashed out in controversial fashion, Lineker’s six goals were enough to see him awarded the Golden Boot.

Lineker was voted Footballer of the Year for his performances for both club and country in 1986 and his phenomenal achievements with Everton led to Barcelona manager Terry Venables paying a record £2.8 million for his services which saw him head to Spain on his return from Mexico.

In three seasons at the Camp Nou, he won the Copa Del Rey and European Cup Winners’ Cup, but as the system changed under new boss Johan Cruyff, he was forced to play wide – a position that didn’t suit his natural predatory instincts.

A return to England with Tottenham Hotspur followed in 1989 where he was reunited with Terry Venables and Lineker was again the top-flight’s highest scorer in 1990 going into that summer’s World Cup in Italy.

Once more Lineker excelled on the global stage and his experience around the likes of the young Paul Gascoigne was essential as Bobby Robson’s men grew in confidence as they progressed through the competition.

This time, Lineker scored four goals en route to the semi-final, including the goal which took that fateful match to extra-time and ultimately penalty defeat against West Germany with Lineker obviously burying his spot-kick in the shootout.

In 1991, Lineker won his only piece of domestic silverware, when Spurs triumphed in the FA Cup final as they overcame Brian Clough’s Nottingham Forest in extra-time, but he left them at the end of the 1991/92 season, choosing to take up a new challenge in Japan with Nagoya Grampus Eight.

Despite plying his trade in the J-League, Lineker headed to the 1992 European Championships in Sweden - which would be his last major tournament before international retirement - with 48 England goals to his name, just one behind Sir Bobby Charlton's record.

And with England chasing a goal in their third and final group game against hosts Sweden, Lineker was replaced in the 62nd minute by Alan Smith with the furious-looking striker trudging off the pitch, barely acknowledging his manager.

The epitome of a goal poacher, his willingness to take a chance on where the ball would be, as well as a fearless enthusiasm to throw himself amongst the flying boots of the six-yard area made Lineker a favourite wherever he played.

Even more incredible than that, in over 600 games at both club and international level, Lineker’s exemplary sportsmanship ensured that, in a career spanning some 16 years, he never once received a yellow card.

Perhaps the highest compliment that can be paid to Lineker is that he would have thrived in any era as his game was built on an intelligence that would have prevailed regardless of circumstance or tactical advancement.

For him the game was not about physicality or strength, more so a simple process of deduction - if the defender is there, where must I need to be in order to score?