England midfielder Jesse Lingard has called on Gareth Southgate to include WBA, IBF, WBO and IBO heavyweight world champion Anthony Joshua in his next England squad after the midfielder received a battering at the hands of the boxer in a game of FIFA.

“Get him up front, ping the ball up to him…let’s play off AJ,” the midfielder joked after Joshua beat him 10-1 on FIFA 21 during a charity event.

Lingard narrowly, and some might say unfairly, missed out on a place in Southgate’s expanded 26-man Euro 2020 squad - cut from a provisional 33 pre-tournament - after a rich run of form while on loan at West Ham United from Manchester United last season, helping the Hammers to a sixth place Premier League finish and qualification for the Europa League group stages next term with nine goals and five assists. But the omission hasn’t deterred the 28-year old from staying involved and keeping his focus firmly on happenings on the pitch. Spending time as part of charity esports festival Gamers Without Borders, Lingard faced his toughest career challenge to date: a one v one with AJ on home turf - FIFA 21.

The England international, you’d think, would breeze to victory being a pro-footballer, but Joshua proved to not only be a champion in the ring, but also outside the ropes too as he put the 2017 Europa League winner to the sword with a resounding 10-1 victory over two matches at the Gamers Without Borders festival, as the pair played their part in helping unite gamers worldwide in the $10million fundraiser for COVID-19 vaccine distribution.

Lingard, who has 29 caps and four goals for the national team, took to the field as two different teams, while 2012 Olympic Gold medalist Anthony Joshua opted for Liverpool in both games of a best-of-three format. Anthony Joshua is a well documented Watford FC fan, but erred on the side of caution when face-to-face, albeit via a weblink, with Lingard, who was taking no prisoners as he first chose German powerhouse Bayern Munich, before opting for Chelsea in the return leg. 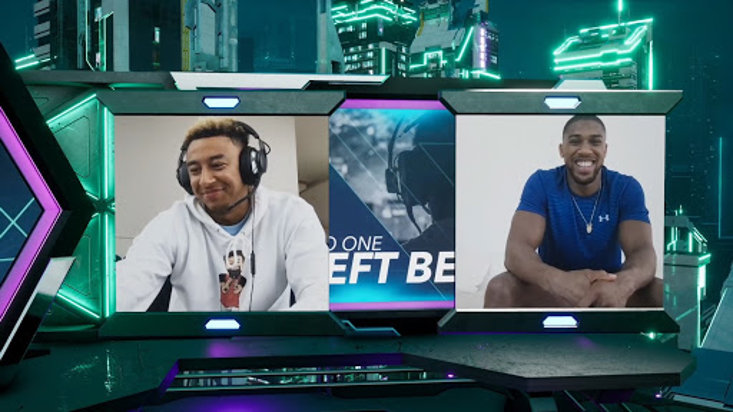 Things went from bad to worse for Lingard though. After finding himself 2-0 down early in the second half, he conceded a penalty and lost Niklas Süle to a straight-red card. Joshua coolly converted the spot-kick to put the game to bed, easing to a 3-0 win. Advantage AJ.

Undeterred, Lingard opted for a Premier League face-off in game two with Chelsea, which early on looked to pay dividend as AJ failed to net early on as he had in the previous game. However, as with his boxing, Joshua proved too much. 26-minutes on the clock saw Roberto Firmino hit the back of the net and the demolition began. Joshua thrashed Lingard 7-1 in the second game, with the midfielder scoring his consolation in the 80th-minute at 6-0, before AJ netted once more with 90 minutes on the clock to earn double figures over the two ties. A frustrated Lingard even attempted to rage-quit late on, before continuing.

After the match Joshua said, “I want to give credit to my opponent. He came with great enthusiasm and morale was high. I felt like I kept my team together, they gelled well, and we managed to get the victory. I just want to say thanks to the team, the management, the support – I can’t wait to do it again, Jess!”

For fans wondering how he was so good, AJ explained, “I don’t really play [FIFA] that much – but when I do play, I really play! That’s the difference!”

Lingard, who knew he was being kicked whilst down, responded, “He was hacking! I’m more of a Call of Duty man. Every time I get asked to do a charity event it always ends up being FIFA – and I always get absolutely slapped! It is for charity though, so I’ll always do it and give my best. AJ was the man and gets my respect though.”

The midfielder went on to discuss his omission from Southgate’s Euro 2020 squad, insisting there were no hard feelings, and vowed to cheer the team on from home. He said, “I’m a fan as well [as a player]. I’ll always support my boys and always support England, like the whole nation. The first game I was in a beer garden with all the fans, which was fun seeing it from a different perspective. I really enjoyed it and I’ll carry on supporting them throughout the competition." 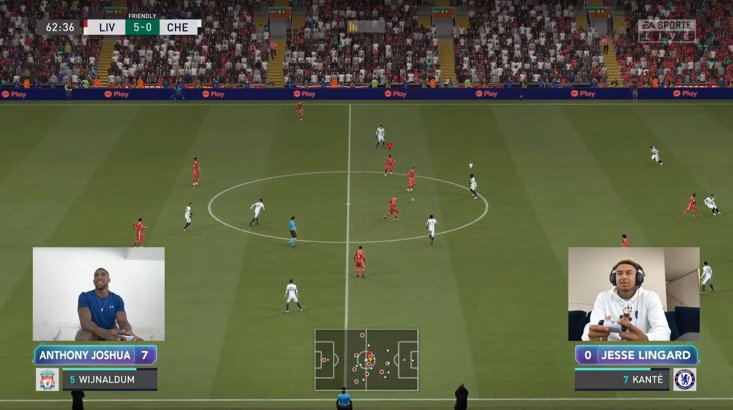 Lingard also opened up on his highly-successful loan spell at West Ham whilst participating in the event. He explained, “The loan moved helped me. I wanted regular football and I spoke to Ole [Gunnar Solskjaer] and he agreed, so sent me out on loan to West Ham.

"I think people at the time didn’t think I was ready to play, but I always do things behind closed doors to keep my fitness up. Then in the Aston Villa game I started really well with two goals and from then on carried on my form. It was about regular football and while I was there it was about fighting for European football, which was a great achievement when we made it into Europe.”

The pair’s $50k charity exhibition tie was part of an opening weekend of Gamers Without Borders’ elite series, the first of six straight weeks of action featuring the world’s biggest and best esports athletes. Over its duration, more than $10million will go to humanitarian organisations distributing COVID-19 vaccinations in the world’s poorest countries; UNICEF, Gavi, Direct Relief, the International Medical Corps and the King Salman Humanitarian Aid & Relief Centre.

You can watch the two-games in full on Gaming Without Borders' Twitch channel and learn more about the charity here.