It has taken England reaching a European Championship final on home soil to achieve it, but finally the vast majority of the nation is coming to the realisation that women belong on a football pitch.

Tuesday’s fantastic 4-0 victory over Sweden has set up a showdown with either Germany or France at a sold-out Wembley on Sunday, and whether they win or lose Sarina Wiegman’s side will come out of the experience having arguably done more for the game in this country than any group since 1966.

It is well documented that women were banned from playing football by the FA in 1921, casting aside the very concept of females partaking in the game just months after they had been attracting 50,000-plus crowds. And the ban stayed in place for a full 51 years. But half a century on from the scandalous suspension being lifted, we can finally start to dream of a day when the two sides of the sport might be treated equally. The 448,917 aggregate attendance so far and the 90,000 Wembley crowd to come on Sunday alone speak of a breakthrough of humongous proportions, especially stacked up against the previous Women’s Euro attendance record of 240,055.

There remain massive disparities between the coverage, huge gaps in pay, terrible imbalances in marketing and unequal approaches to commercialisation. Those 51 years in which football was strictly a men’s sport have left women playing a game of catch-up that will still take decades to address. Imagine if they stopped women from playing tennis for 51 years… there is no way they would enjoy (relatively) equal billing at Grand Slams as they do today.

Similarly, we are some way off from the time when Fifa, Uefa and the FA throw the full might of their resources at women’s competitions as they do at men’s. But we can see that day more clearly in our mind’s eye after the successes of Euro 2022. You will have to squint to see it, mind. 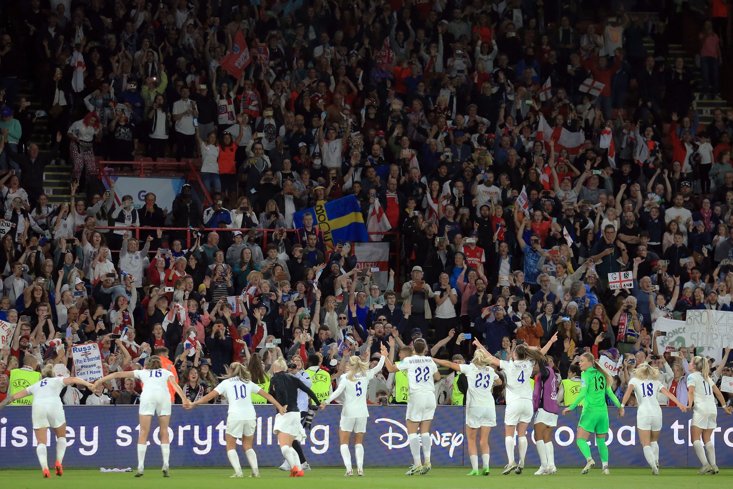 ENGLAND CELEBRATE WITH THE FANS AFTER REACHING THE WEMBLEY FINAL

There are still cultural issues which feed into the idea that women should cook, clean and raise babies first, and enjoy pursuits usually reserved for men second. Even former prime minister Theresa May talked on live TV as recently as five years ago of there being ‘boy jobs and girl jobs’ around the house, perpetuating the everyday sexism which has helped to hold females back for centuries.

Not for her the messages we have seen around the pitches of England this month proclaiming, rightly, that “women play football, not women’s football”, nor a promotion of #HerGameToo’s values of not differentiating between the men’s game and the women’s game, nor between male and female supporters. It is football, and we all play it. Just as women can do any job, they can play any game too.

And that’s where the Lionesses have done so much for the country over the past few weeks. At a time when the Women’s Super League is finally creeping into the public consciousness, the England team have become the focal point of British sporting life this month. Alessia Russo, Georgia Stanway and Mary Earps are now household names. Beth Mead and Millie Bright are national heroes. And if Leah Williamson lifts the ‘Women’s Euro Trophy’ on Sunday night she will be up there alongside the legendary Bobby Moore as the only senior English footballers to lift a major international trophy.

It's about bloody time that the wider world realised what women have to offer football. The fervour surrounding these history-making Lionesses is hopefully just the start.