European football returns this week with a new cap on the price of match tickets for away supporters in UEFA’s two major club competitions, the Champions League and the Europa League.

Last season, years of ticket price increases for travelling fans culminated in a scarcely believable zenith – or nadir – when Barcelona charged Manchester United and Liverpool supporters €119 in the Champions League quarter and semi-finals, prices as dizzying as the seats on the top tier of Camp Nou.

Earlier in the competition, United supporters had already been charged €85 away at Paris Saint-Germain, ten euros more than Bayern Munich supporters had paid in the French capital the season before.

That same year, the Bavarians were also charged €100 by Anderlecht, although the Belgian club were later instructed to reimburse some of the money after being found to be in breach of Article 19 of UEFA’s Safety and Security Regulations which states that “the price of tickets for supporters of the visiting team must not exceed the price paid for tickets of a comparable category that are sold to supporters of the home team.”

This season, following campaigning by Football Supporters Europe (FSE) and other club-specific fan groups, UEFA have capped the price of away tickets at €70 in the Champions League and €40 in the Europa League - figures based on the current price of a category 4 tickets for the finals of each competition.

Matt Ford
@matt_4d
@julienwolffwelt #FCBayern supporters demanding a price cap for away fans in European competition at last night's #UCL semi-final.
Bayern fans were charged €100 away at #Anderlecht in the group stage. #MUFC supporters were initially charged £89 away at #Sevilla.
[pic: @LovellLowdown] 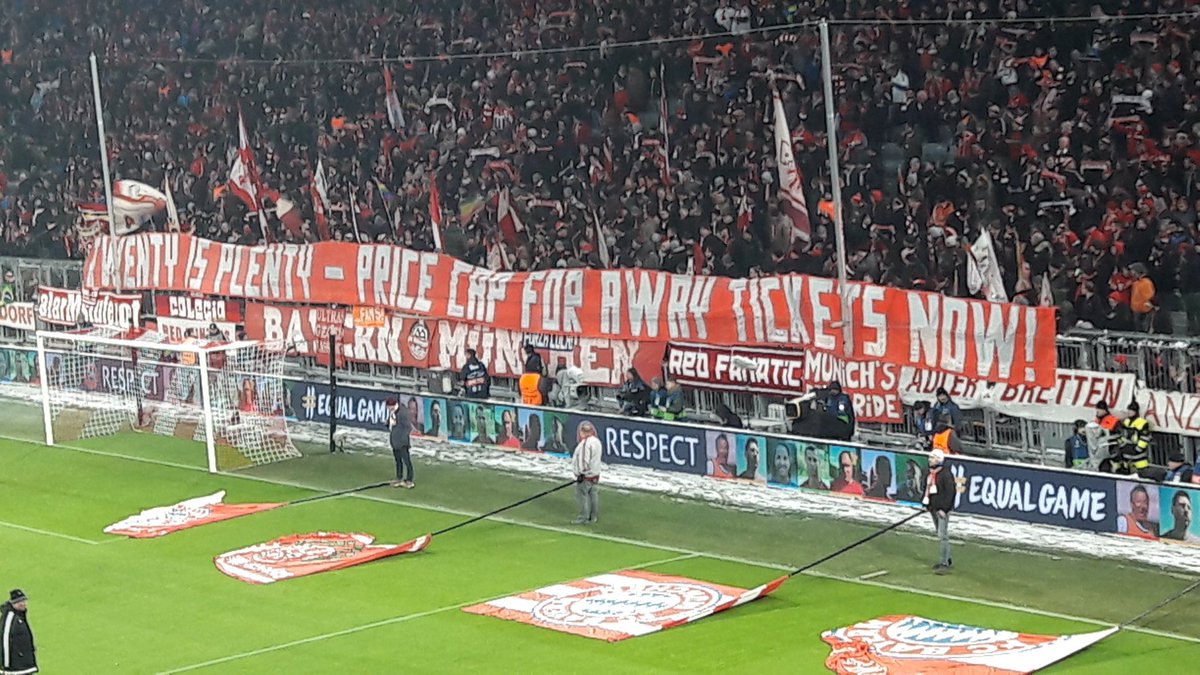 “Fans are the lifeblood of the game and those who follow their teams to away matches must have access to tickets at a reasonable price, bearing in mind the cost they have already incurred for their trip,” said UEFA President Aleksander Ceferin.

“By capping ticket prices, we want to make sure that away fans can still travel to games and play their part in making the atmosphere inside football stadiums so special.”

Fans groups across the continent have welcomed the caps but have lamented that they are still too high, while also expressing fears that clubs could view the caps as default benchmarks rather than an absolute maximum.

“This represents progress and we commend UEFA for their forward-thinking,” said FSE executive director Ronan Evain, who led discussions with the governing body personally. “The cap will eliminate the most egregious cases of overpricing, but it is, in our opinion, still too high.”

“We see this change as a first step,” added the Manchester United Supporters’ Trust (MUST).

“The level of the cap is excessive compared with the Premier League [£30] and new caps in the French [€10] and Dutch [€15] leagues and we are cautious of the risk that it becomes a default price for teams with significant away support.”

Those fears have already been realised. For the second consecutive season, Liverpool have been drawn against Napoli in the Champions League group stage. The current holders have been allocated 2,558 tickets for the Group E clash at the Stadio San Paolo on Tuesday night, priced at £63/€70 each – ten euros more than what visiting fans were charged for the same fixture last season, and equalling the new maximum price cap.

Liverpool supporters’ group Spirit Of Shankly said they were “outraged” at what they called an “abuse” of the new regulations, which they see as “a ceiling, not a floor.”

“It seems clubs are continuing to take advantage of travelling fans,” they added.

Spirit of Shankly
@spiritofshankly
We are outraged that Napoli are charging LFC fans €70 - the maximum allowed under @UEFA price cap - a €10 increase on last season.
This is abuse & misuse of the rule - it is a ceiling not a floor. It seems clubs are continuing to take advantage of travelling fans.
@FansEurope
163
799

Next week, Bayern Munich supporters will again be hit hard when they travel to London to support their team against Tottenham Hotspur at the New White Hart Lane, where tickets in the away end have been priced at £60/€67 – only three euros short of the cap and an “outrageous” price, according to fan group Munich’s Red Pride (MRP).

“A price cap was long overdue,” they told The Sportsman. “But when we learned that it was to be set at €70, it seems that Ceferin and UEFA’s definition of ‘reasonable’ is based more on the wallets of UEFA and club functionaries rather than those of ordinary football fans.”

Instead, MRP, who have carried out several visible protests over ticket prices in the Champions League in recent years, have demanded a further reduction to €20, in line with the “Kein Zwanni” (Twenty’s Plenty) campaign initiated by Borussia Dortmund supporters in Germany as early as 2010.

“It’s the only reasonable solution,” say the Bayern fans, who are also critical of their own club’s decision to charge away fans €50 at the Allianz Arena in Munich, €20 more than the cheapest home end seats.

After UEFA last season lifted its ban on the sale of alcoholic beverages at Champions League and Europa League matches (although ultimate decisions still lie with the clubs in question), fans also demanded a return of standing terraces, launching the “Europe Wants To Stand” campaign.

That campaign, as well as demands for a further reduction in ticket prices, look set to continue this season. 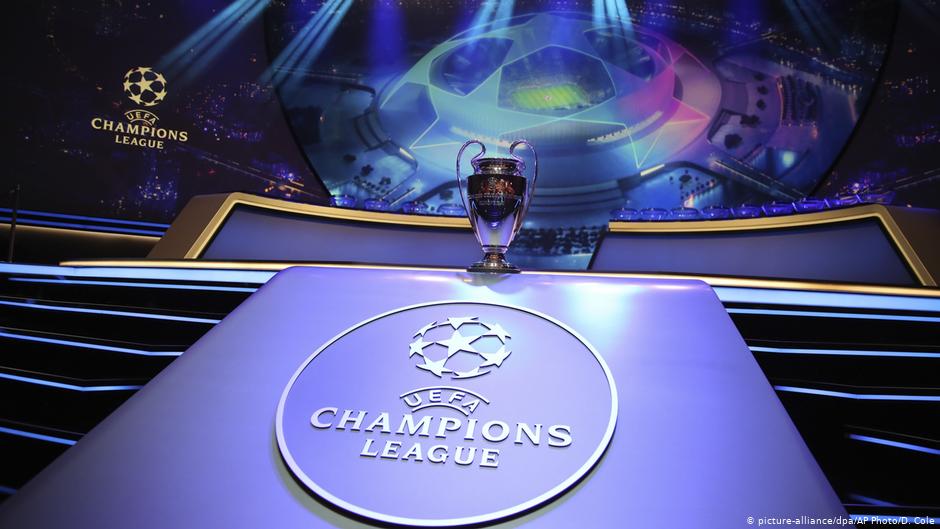 Financial Fairplay
@FinancialFairpl
#UEFA caps ticket prices for away fans at a maximum of 70€ in the @ChampionsLeague
70 € probably suits the income of @UEFA and @ECAEurope officials, but does not meet the requirements of ordinary football fans at all!
Your greed kills our football!
#TwentysPlenty #PriceCap
0
2
More
football
Business As Usual: A Beginners Guide To The Belarus Premier...
If you’re going out of your mind without your football fix, well we’re sorry you just haven’t [ ... ]
football
Why June 30 Could Be D-Day For The Fate Of Premier League Season
England captain Harry Kane has added his voice to the growing calls for the Premier League season to [ ... ]
football
You Heard It Here First - Brescia's Sandro Tonali Is Italy's...
Since winning the World Cup in 2006, it has been turbulent time on the international stage for Italy. [ ... ]
football
A Reunion With Ancelotti Could Resurrect Rodriguez's Stuttering...
No club chews up and spits out world class players quite like Real Madrid. Yet, their sense of entitlement, [ ... ]
football
'Quickly Kevin' Is The 90s Football Nostalgia Podcast To Beat...
While the majority of sports podcasts scramble to fill the minutes within the disruption of the [ ... ]
football
Where Did It All Go Wrong For Phil Neville And The Lionesses?
Winning, Phil Neville recently said at the SheBelieves Cup, is what would bring England’s women [ ... ]
football
''Drop A Few Hand Grenades'' Keegan's Advice To Scholesy The...
A packed out Wembley roared like one of those indomitable Three Lions to greet England’s new messiah. [ ... ]
football
Rise Of The Couch Coach: Coronavirus Causes 119% Surge In Football...
Thousands of us are flocking to virtual reality and gaming to help fill the void of no live football, [ ... ]
football
Review: Diego Maradona - Drop Yourself Into The Great's Chaotic...
When Diego Armando Maradona arrived at Napoli in 1984 for a world-record fee, the entire city ground [ ... ]
football
Arsenal's Tough Choice - Is Donyell Malen The Ying To Aubameyang?
Arsenal’s inability to manage the contractual situations of their biggest stars has plagued them [ ... ]
football
Robbie Fowler Is Making His Mark As A Manager With Brisbane...
The curtains came down on one of the last bastions of football standing in 2020 this week. Before the [ ... ]
football
Long Live The King: Eric Will Always Be Manchester United's...
“If ever there was one player, anywhere in the world, that was made for Manchester United, it [ ... ]
football
I Was There - The Day Football Came Home To Wembley
The closest I ever got to attending the original Wembley Stadium was on its final day in operation in [ ... ]
football
'Sunderland Til I Die' Heads To The Boardroom In Netflix's Second...
The docks have been left deserted. The wealth has dried up. Wearside has become an impoverished place [ ... ]
football
How Chief Creator Silva Became New Face Of Premier League
Football has been cast into uncertainty by the coronavirus pandemic. As it stands, nobody is sure if [ ... ]
football
Lookback:Chelsea 6-0 Arsenal When Arsene's 1000th Game Went...
It was supposed to be an occasion to celebrate for Arsene Wenger, but his 1000th game in charge of Arsenal [ ... ]
football
Ronaldo, Kane, Hazard - The Winners And Losers Of Euro 2020...
So as of this week Euro 2020 became Euro 2021. Another casualty of the global Coronavirus epidemic. [ ... ]
football
Time To Act And Move The Premier League Transfer Window
When my husband had an ear infection, I used my medical knowledge to help him. I said the best thing [ ... ]
football
Southgate Shows Strong Leadership With Rallying Cry To Fans
England head coach Gareth Southgate has sent a rousing message to national team fans as football continues [ ... ]
football
Lookback:Spurs And Chelsea's Eight Goal Thriller
In the three full seasons of Jose Mourinho’s first spell as the club’s manager, Chelsea [ ... ]
football
Take Your Pick - The Premier League Season Ending Scenarios
There are far more pressing concerns than football at the moment, as Jurgen Klopp so eloquently pointed [ ... ]
football
Premier League Clubs Must Be Less Karren And More Klopp Right...
We all know a Karen, don’t we. The proverbial I need to speak to the manager type, and while most [ ... ]
football
PSG Will Never Win Big If They Continue To Be Mentality Midgets
These days, everyone is in need of a laugh, so if you’re not aware of the @NoContextHearn account [ ... ]
football
Blackpool, Video Games And Escapes - How Footballers Have Dealt...
That date of April 3 for the Premier League to resume is looking increasingly optimistic day to day.  [ ... ]
football
Here Are The Meetings That Will Shape A Pivotal Week In The...
Coronavirus has completely destroyed the sporting calendar and led to most events being either completely [ ... ]
football
Elbow Bump! Leyton Orient Are Using FIFA 20 To Bring The Football...
With almost all football suspended for the next few weeks and with boredom already creeping in, one [ ... ]
football
Premier League Hall Of Fame Event Cancelled Due To Covid-19...
The Premier League’s first two inductions into a new Hall of Fame are set to be postponed after [ ... ]
football
Sancho’s Time At Dortmund Made Him A Pioneer - Jude Bellingham...
Results haven’t shown it, and there are fair questions surrounding his tactical approach and leadership, [ ... ]
football
Crystal Palace Left To Rue Alexander Sorloth's Untimely Revival...
Alexander Sorloth looked lost. The strapping Norwegian striker had arrived at Crystal Palace from FC [ ... ]
football
The Man Behind Downton Abbey Turns His Hand To Football And...
“Look around. You’ve given these people something to believe in. The game feeds the soul. [ ... ]
This website uses cookies
Cookies help us and our partners provide statistics. By browsing this website, you consent to the use of cookies in accordance with our Privacy Policy and Cookies Policy.
Accept & Close