Football
News
It was a game of fine margins, not least the gap between Mane and the West Ham defensive line
Joey Mills
19:28, 05 Mar 2022

Liverpool have gone within a win of Manchester City at the top of the Premier League table, after a hard-fought win over West Ham United. Jurgen Klopp’s side did not have everything their own way at Anfield, but as the cliche dictates, winning when you’re not at your best is the hallmark of champions. The Cityzens will get the chance to widen the gap tomorrow as they welcome Manchester United to the Etihad Stadium.

Liverpool nearly engineered the perfect start through a smart Trent Alexander-Arnold free kick. The England full-back played a quick ball over the top to Mohamed Salah, and the Egypt international should have done better with his strike. Salah threatened again, but Craig Dawson’s perfectly-timed slide tackle put paid to the early assault on the West Ham goal.

Michail Antonio had chances, testing Alisson on two early occasions. First, the Brazilian stopper dived for an arrowed half-volley. Then, when Antonio cut inside, he got down low to his right to tip the effort round the post.

The pendulum swung again as Sadio Mane escaped the attentions of Dawson to slot home. The forward faced a nervous wait for the outcome of a VAR review, but got the decision and the goal. Chelsea’s Romelu Lukaku may feel aggrieved if he was watching, considering Mane’s positioning looked remarkably similar to his own disallowed goal against Liverpool in last week’s Carabao Cup final.

Luis Diaz continues to stoke the fires of a love affair with the Liverpool faithful. The January signing from Porto caused problems in the Hammers back-line. A magnificent, tricky run ended when he was brought down by Kurt Zouma. Alexander-Arnoled bent the free kick just wide, but Diaz wasn’t done. The winger then forced Lukasz Fabianksi into a solid save, then the ball almost squirmed into the net before being cleared.

A goal-mouth clearance was required at the other end soon after. Pablo Fornals beat the offside trap, despite Liverpool protests, to dink the ball over Alisson. Alexander-Arnold cleared the attempt off the line, and eventually deflected a follow-up behind for a corner. Trent tore into the assistant referee for the initial offside not being given, but the replays showed the match officials has called it correctly. 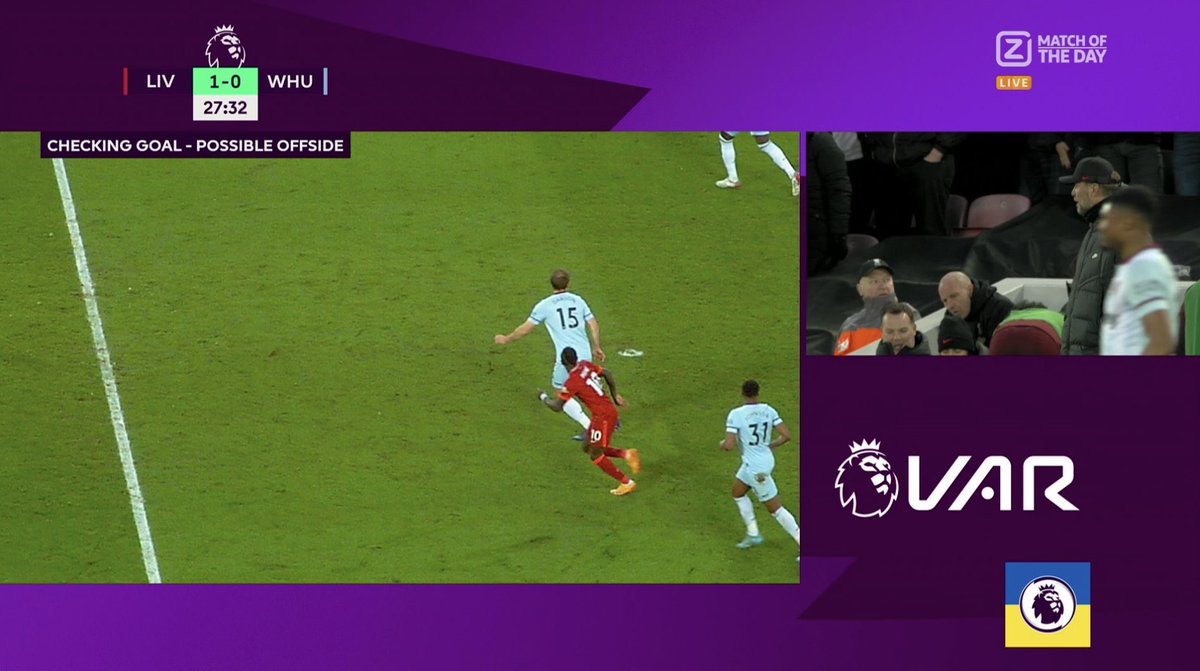 A rare lapse from Virgil van Dijk nearly awarded West Ham the ideal start to the second half. The totemic defender headed back loosely into the path of Jarrod Bowen, who was robbed by the sharp Andy Robertson. It was an early warning sign that the Hammers were not going to lay down.

Liverpool eased their way into the half though, and once more it was Alexander-Arnold providing much of the threat. The attack-minded right-back whipped in a searching ball that was well-cleared by Zouma. A Salah snap-shot drew a routine save from Fabianski too, as Liverpool piled on the pressure.

Manuel Lanzini will spend his evening ruing a glorious missed opportunity with 20 minutes remaining. Tomas Soucek crossed for the midfielder, who set himself with a deft first touch but fired his shot over the bar with time on his side.

Diaz continued to pose a severe danger to David Moyes’ side, firing a shot just wide from the edge of the box. But still, for all their efforts Liverpool could not increase their slender lead. West Ham continued to threaten. Mark Noble split the Liverpool defence with a great long pass, before Naby Keita rushed across to block an Antonio shot.

Despite both sides trying to force the issue right up until the whistle, the game ended with just Mane’s first-half strike separating the teams. West Ham will rue a number of missed chances to put pressure on their top-four rivals, while Liverpool continue to gain momentum in their late title push.