Football
News
Jurgen Klopp's men got their season off to a perfect start after beating Norwich City 3-0 at Carrow Road
Kieran Spratt
19:46, 14 Aug 2021

A Mo Salah inspired Liverpool kicked off their Premier League campaign with a convincing 3-0 win over newly-promoted Norwich City at Carrow Road.

The Egyptian talisman scored one and assisted two to stretch Liverpool’s unbeaten run against the Canaries to 15 Premier League games and he became the Premier League’s second-highest African goalscorer, behind Didier Drogba, in the process.

Following on from ten consecutive defeats at the end of the 2019/20 season, Norwich became just the third team to lose more than ten Premier League games in a row, but despite the damning statistics, and although they were under the cosh for large periods, they did have some good moments against the likely title-challengers. Teemu Pukki in particular found some success in getting in behind Liverpool's defence and forcing Alisson into action.

Liverpool got the opener through Diogo Jota after Trent Alexander-Arnold found himself in acres of space. The right-back curled it into Mo Salah who got a touch and, somewhat fortuitously, found Jota free to rifle past Tim Krul.

Jurgen Klopp’s side got a deserved second when Sadio Mane's shot was blocked by Grant Hanley in the Norwich box but the ball fell to Salah in the penalty area. He spotted Roberto Firmino and the striker made no mistake with a simple finish. That goal was Liverpool’s 8000th in the league and they became only the second club to reach that milestone after Manchester United (8,089).

Liverpool added a third and put the game to bed with 25 minutes remaining after a Norwich clearance landed at the feet of Salah once again. He brought the ball under control before firing a shot past Krul from the edge of the penalty area. It is the fifth successive opening weekend to a Premier League season in which Salah has scored. 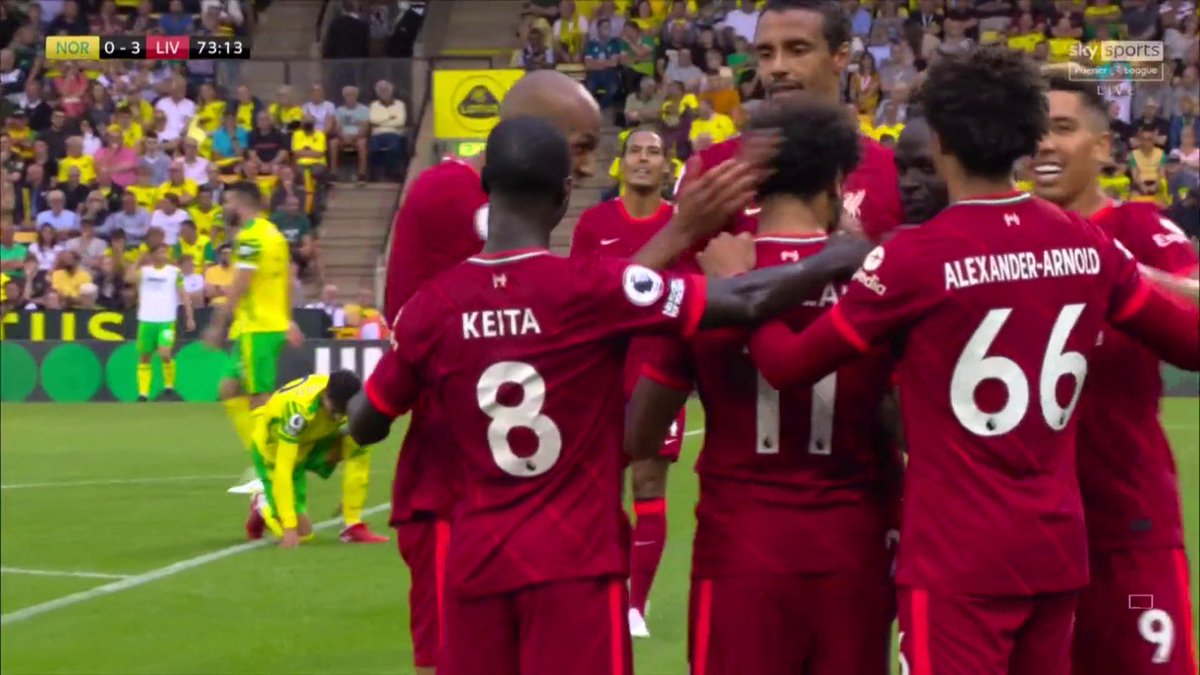 The Reds were deserving winners but that’s not to say Norwich didn’t have chances and they should have had at least a consolation in the closing minutes but Alisson pulled off three incredible saves in close succession after a bonkers goalmouth scramble.

It was the perfect start for Klopp as they lay down their assault on recapturing the title from Manchester City. It was also great to see Virgil van Dijk, whose absence was so detrimental to Liverpool last season, make his first appearance in 301 days.

Speaking to Sky Sports after the match, Klopp said, "We had to find our way in the game and scored three really nice goals because we forced them. It's a good start. The boys are fit but you have to get used to the feeling again, that it's really exhausting but you can [still] go.

"You have to get over that point in the game, and we did, and hopefully next week we'll be fresher for longer."

As for Norwich, who lost 27 of their 38 games last time around, though well-beaten, they certainly showed signs that they aren’t here to just to make up the numbers this season.