Football
News
Steven Gerrard might be an Anfield legend, but his side did Liverpool no favours at Villa Park
Joey Mills
21:56, 10 May 2022

Liverpool triumphed 2-1 over Aston Villa at Villa Park on Tuesday night. The hard-fought win takes them level on points with title rivals Manchester City. The Cityzens have a superior goal difference, boasting 68 to Liverpool’s 65, but the Premier League title race looks set to go down to the wire. If Liverpool icon Steven Gerrard had got his way, his old team would have been further off the pace. The Midlands side put up a brilliant fight in front of their fans, especially in a riotously entertaining first half.

Despite being coached by a former Liverpool great, Villa were in no mood to do Liverpool any favours. Ollie Watkins got in behind the Merseysiders’ defence early, forcing a good save from Alisson. But Liverpool did not clear the danger, and they would be punished. A searching cross saw Kosta Tsimikas caught out, and Douglas Luiz had his header saved before hammering home the rebound. Just three minutes in, Aston Villa had torn up the script.

The reaction was almost instant. Jurgen Klopp’s side came roaring back, when a Trent Alexander-Arnold free kick was mis-controlled by Tyrone Mings. The loose ball fell to Virgil van Dijk, who drew Emi Martinez into a save. The resulting rebound was dispatched by the unlikely boot of Joel Matip and Liverpool were level.

The Champions League finalists were ill at ease throughout the half. Luiz played Matty Cash in down the right flank, and the full-back’s cross was hastily and messily cleared by Matip. Alisson also nearly handed Villa the lead when bungling a Fabinho pass-back into the path of the advancing Watkins. Liverpool lacked composure, perhaps the pressure of fighting on so many fronts was finally penetrating their usually-cool facade.

There was a moment of hope, but Sadio Mane’s apparent goal was quickly extinguished by the linesman's flag. It was the correct decision, as Luis Diaz had been well offside when receiving the ball before providing the assist.

Gerrard was not the only ex-Liverpool hero on show, and the other former Anfield favourite nearly punished his former club. Philippe Coutinho played a smart exchange of passes with Lucas Digne out wide on the left, before cutting inside and putting his shot just over the bar.

Liverpool had chances too, but their usual ruthlessness had deserted them. An Alexander-Arnold cross got caught under the feet of Naby Keita. The midfielder had time and space and you feel Diogo Jota would have made far more of the chance. Marvelous Nakamba’s loose pass outside his own box was seized upon by Curtis Jones, but the impressive 21-year-old’s strike was the perfect height for Martinez.

Worryingly for Liverpool, as well as a difficult challenge on the night they also incurred a longer-term problem. Fabinho went off injured around the half-hour mark, replaced by Jordan Henderson. With an FA Cup Final on deck this Saturday, plus league exertions and a Champions League final to come, losing their midfield heartbeat could be fatal to Liverpool’s trophy hopes.

Sky Sports Premier League
@SkySportsPL
What a response from Liverpool!
Joël Matip pokes the ball home and what a start we've had here at Villa Park! 🤯 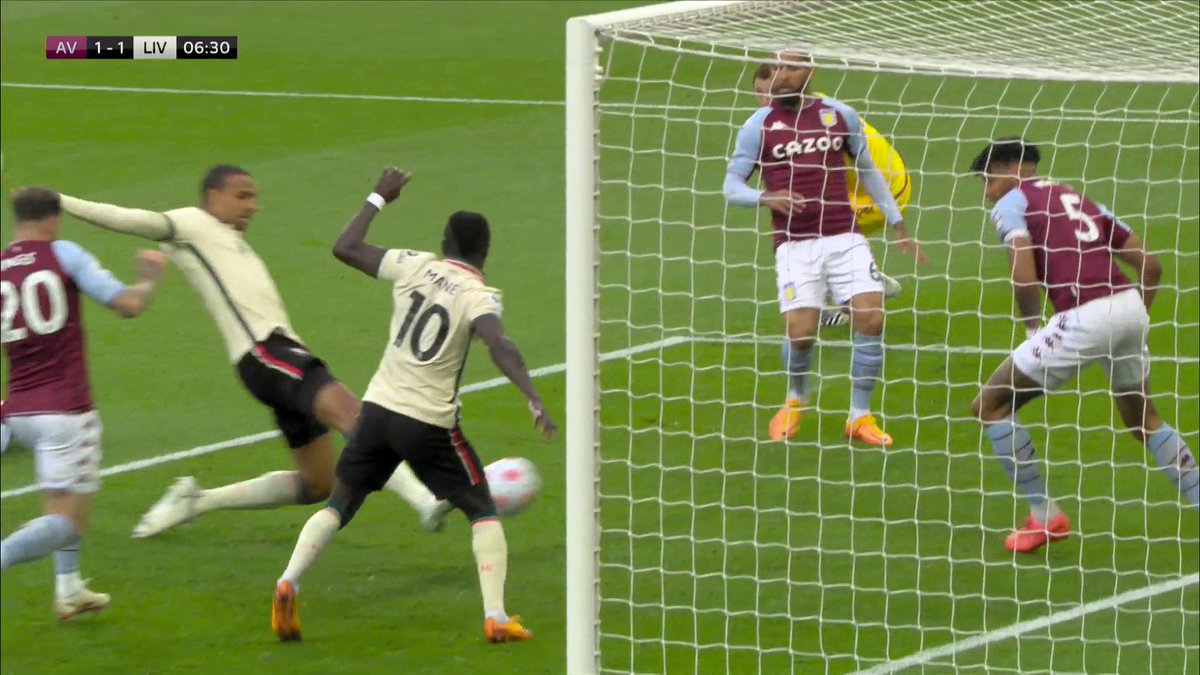 After a nightmare first period, Liverpool nearly enjoyed a dream start to the second half. Alexander-Arnold went agonisingly close with a free kick, sending Martinez scrambling. Villa came out with plenty of energy themselves though. Coutinho left Van Dijk standing during a Villa breakaway, but made a meal of his touch in the box and the Dutchman recovered well.

Klopp turned to his bench to try and break Villa’s resistance. The creative talents of Thiago were employed, with Curtis Jones making way. Liverpool did not have to wait long after his introduction to make the breakthrough. The ex-Bayern Munich midfielder’s interception led to a move that saw Diaz cross for Mane to head past Martinez. It was pressing football at its finest, a quick turnover of possession and a swift, decisive reaction to the transition from defence to attack. Klopp may have refined the gegenpress from its “heavy metal” origins, but he can still play the hits.

Liverpool were not out of the woods yet though. Danny Ings, yet another ghost of Anfield’s past, broke through. He was brilliantly closed down by Alisson, as the Brazilian firmly put his first-half wobbles behind him.

Despite the looming Wembley trip, Mohamed Salah was given a run-out with twenty minutes remaining. Luis Diaz was the player to make way, perhaps an effort to protect the legs of their blockbuster January signing. Salah nearly made an immediate impact, but a heavy touch in the Villa box bought Martinez enough time to dispossess him.

City play twice more before Klopp’s men take to the field again in the league, with Liverpool’s attention now turning to Chelsea in the FA Cup on Saturday. Tonight’s win was vital to keep this thrilling two-horse race alive. Tonight will have been a nervous watch for many on Merseyside, and the season is set to throw up a few more nail-biters yet.