It is little over two months since Liverpool were eighth in the Premier League, on a run of six successive home defeats, dealing with the injury-ravaged remains of a once-dominant squad and staring at the inevitability of a season without Champions League football.

That was in early March, but mid-May has much better news for Reds fans. Since that season nadir they have won six and drawn two of eight Premier League fixtures, their forwards are firing once more, their inexperienced stand-ins are standing up and, thanks to their 3-0 win at Burnley on Wednesday night, Liverpool are now in the Champions League spots with one game to play.

This will obviously not go down in the annals as a great Liverpool season, and compared to what they were about to achieve this time last year scraping into the top four doesn’t come close. Yet given the adversity that Jurgen Klopp and his players have suffered at times in 2020-21, qualification for Europe’s top-tier competition would provide almost as big a relief as did ending a 30-year title drought.

They were far from at their best at Turf Moor, often being outfought if not out-thought during a first half which was in some ways classic of an away trip to Burnley in front of home fans who demand nothing more than 100 per cent effort. Chris Wood, Thiago Alcantara and Mohamed Salah were among a host of players to spurn good opportunities as Burnley ruled much of the flow of the opening stanza in their crowd-boosted surroundings. 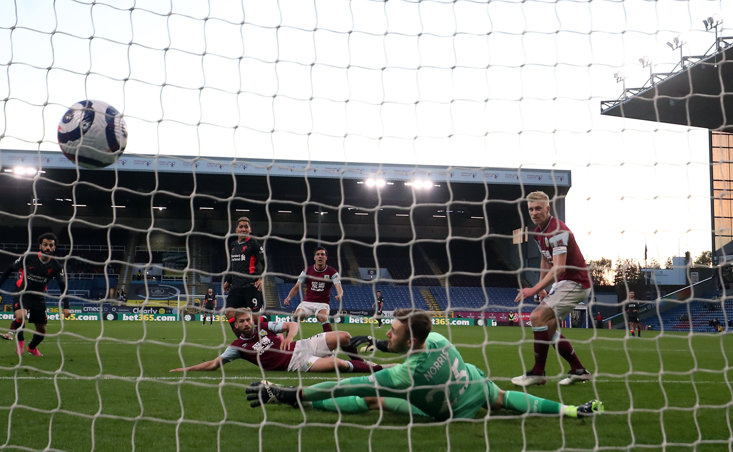 However, Liverpool blitzed the Clarets with goals either side of half-time. On the verge of the interval, Andy Robertson got beyond Johann Berg Gudmundsson to reach the bye-line before pulling the ball back for Roberto Firmino, who fired confidently home from around the penalty spot with Burnley’s defensive left flat-footed. Nat Phillips doubled the lead soon after the break, heading high beyond the dive of Will Norris from Sadio Mane’s left-wing cross. Alex Oxlade-Chamberlain came on to put a bow on the victory with a late goal which puts them four goals ahead of Leicester going into the final weekend.

Just as they did at times on the way to that priceless 19th championship, Liverpool did enough to get the job done and occasionally threatened more. One more win against Crystal Palace at Anfield on Sunday would mean that this most testing of seasons could still go down as a satisfying one if not a successful one.

The likes of Phillips, Rhys Williams and Neco Williams have ended up playing a far bigger part this term than anyone would have expected from them, and while the former pair led their side to a clean sheet it also felt apt that Phillips should net his first Liverpool goal to secure their return to the top four after more than three months spent on the outside looking in.

It has been one of the less magnificent Liverpool seasons in recent memory, but one more win should be enough for them to breath a massive sigh of relief and look forward to 2021-22 with both hope and confidence. One more win.