Football
News
The Premier League champions' loss to Fulham is their sixth home defeat on the trot
Elliott Bretland
16:00, 07 Mar 2021

Fulham, battling Premier League relegation, were leading against defending champions Liverpool at Anfield and it wasn’t a shock. Not at all. Go back six months, and you wouldn’t have backed the Cottagers to register a shot on the red half of Merseyside, let alone take the lead. Now though, the Reds going behind as hosts is a regular occurrence.

The fact Liverpool ended up losing the game 1-0, their sixth successive loss at home, wasn’t all that surprising either. Brighton, Burnley, Manchester City, Everton and Chelsea have all played their part in Liverpool’s record losing streak at home and Mario Lemina added to their woes on Sunday afternoon. Mohamed Salah summed up the hosts’ recent lethargy with a slow and laborious take-down of a loose ball which Lemina took full advantage of, scooping the ball off the Egyptian’s foot and lashing it into the bottom corner of the net just before half-time.

With Liverpool trailing, supporters, restricted from being at the stadium due to the ongoing global pandemic, found a different way to show their support. A plane was flown over Anfield early in the second half which read: ‘Unity is Strength - Let’s Go Reds - YNWA’. Even that didn’t stir the players on the pitch though. They are suffering a severe crisis of confidence.

After the highs of last season, lifting the Premier League trophy after a 30-year wait to be champions of England, they are now a shadow of the team that stormed to the title in 2020. Then, the front three of Sadio Mane, Roberto Firmino and Salah hunted in packs, seizing their prey before tearing teams to shreds with blistering attacks. In full flow, the opposition didn’t stand a chance. Now though, the trio look tired, bereft of any energy or ideas. Liverpool found what they had been searching for for three decades but now look lost, incapable of finding a home win over a team fighting the drop to the Championship.

At Anfield on Sunday, Diogo Jota and Xherdan Shaqiri deputised for Firmino and Mane. While the former’s return from injury is a welcome boost, the latter has been out in the cold and both have barely touched a ball in months. Fresh legs they are not, not really. 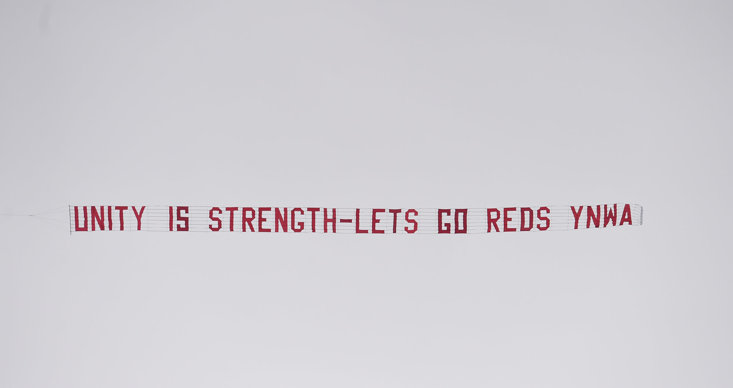 The Reds hadn’t gone eight games without a win at home since they were a Second Division side in the 1950s. Today, such a run could cost them a shot at qualifying for the Champions League. Of course, their defensive issues at the back, without Virgil van Dijk and Joe Gomez for much of the season, have been disastrous. But this streak runs deeper. This is a mentality thing. They are struggling for answers.

Klopp needs to find a fix and somehow build their confidence back up. He doesn’t have time to discover it quickly, he needs it immediately, for Liverpool have seemingly forgotten who they are. Yes, leaders Manchester City are 22 points ahead, but the Reds are still English champions. Such a run only speeds up speculation and question marks will soon grow over the future of star men like Salah. The manager will then field questions, adding to the pressure, while the players will hear the talk and ponder.

They still probed and searched for an equaliser against Fulham but they simply lacked belief. James Mlner found Trent Alexander-Arnold out wide with a positive out-ball but the wing-back was dispossessed easily. The Cottagers were very good, but Liverpool didn’t have the arrogance or swagger which won them games last season and the visitors were in control to claim only their second-ever win at Anfield.

It’s now seven defeats in 11 for Liverpool. Before that run, it was six in 100. Unity is strength and they need to stick together, otherwise any idea of Klopp creating an Anfield dynasty will be left in ruins.