Football
News
Curtis Jones got them going in the second half to end a rough trot
Kris Voakes
21:07, 28 Feb 2021

Liverpool are back. For now. Staring down the barrel of another night of frustration after four straight Premier League losses, and with Sheffield United keeper Aaron Ramsdale in inspired form, their trip to Bramall Lane was starting to look like the latest episode in Jurgen Klopp’s horror story.

But a second-half strike from the impressive Curtis Jones and Kean Bryan’s own goal, both of which demonstrated what fine margins can do in a game of football, led the Reds out of the darkness for the time being and put them right back in the Champions League race following Chelsea’s dropped points earlier on Sunday.

This 2-0 win was not pretty. It was not convincing. And it was not the type which will have the club rushing to share it on YouTube for a trip down memory lane the next time there’s a global pandemic. But if they do end up squeezing into the top four, this might yet end up being the night that made all the difference.

Jones’ side-footed effort shortly after half-time was enough to give them some breathing space, though it did need to be double-checked by VAR as Trent Alexander-Arnold did brilliantly to keep the ball in play by inches as he crossed for the youngster to slot home.

And they doubled the lead when Firmino’s effort at goal looped up off the foot of Bryan and beyond Ramsdale to put the game beyond doubt. 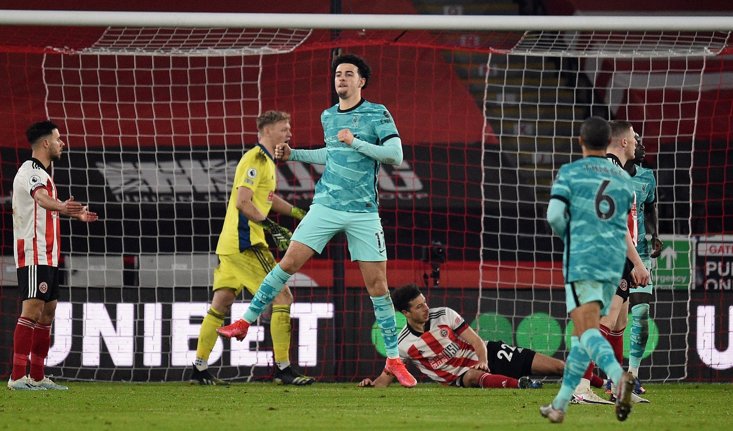 It seemed harsh on Ramsdale if not on the Blades, as the goalkeeper had done everything possible to keep his side in the contest during a one-sided first half. Liverpool ought to have broken through when Firmino broke right through the middle of the home side’s defence, but the Brazilian’s shot gave Ramsdale too much of a chance and the keeper did well to keep it out.

He would be equal to three or four other testing efforts, including one when he denied Mohamed Salah with his legs after Phil Jagielka had done all he could to narrow down the options open to the Egyptian as he approached the byline.

But while Liverpool were made to wait, all that was important in the context of their recent form was that three points were taken back to Merseyside. As with recent performances, this was a long way from vintage Liverpool, but that will matter little to Klopp.

With Jordan Henderson the latest injury absentee and Alisson Becker on compassionate leave following the sudden death of his father, the Reds’ 14th centre-back partnership in 26 Premier League games this term (Nat Phillips and Ozan Kabak) lined up in front of Adrian, whose two previous league appearances in 2020-21 had resulted in nine goals being conceded.

One thing they had going for them, though, was experience, in that while Phillips and Kabak are only 23 and 20 respectively, they are both defenders at least. With Henderson and Fabinho having been used as makeshift centre-backs, Liverpool have often struggled to gain an ascendancy in games. And while this result came against a side with 11 points in 26 matches now, there was certainly greater control in evidence from the visitors.

Touchingly, Jones later dedicated his goal to Alisson's father, telling Sky Sports: "This goal is for Ali's dad, actually. So may he rest in peace, and if Ali sees this, this is for you, bro. He's a strong lad and a big part of the team of course. He's not here today but we miss him for sure.

"I've always said that I'm a player who likes to assist and score goals, so I think the time is right now. We've had good games but we haven't scored as many goals as we would have liked. Today was a good example of putting it all together."

Following a horrific period on and off the field for the club since the turn of the year, an uneventful victory was exactly what they needed.