Rugby League
News
The Huddersfield Giants full-back says his focus is solely on driving his side towards Old Trafford next month
George Riley
15:21, 17 Aug 2022

Leading Man of Steel contender Tui Lolohea would gladly give away his shot at the game’s highest individual accolade, if it meant Huddersfield Giants winning the Grand Final.

The full-back is vying with electric Wigan Warriors star Jai Field for the prestigious player of the season award but says his focus is solely on driving the Giants towards Old Trafford next month.

In truth the two go hand in hand, with the Tonga international’s stunning form a key reason for his club’s impressive campaign.

Yet losing the Betfred Challenge Cup Final in dramatic, heartbreaking late fashion to Wigan hurt Lolohea, having already lost a Grand Final and a Challenge Cup Final with previous club Salford. It was all the more painful for the 27-year old who was on kicking duties at the Tottenham Hotspur Stadium, missing four out of five attempts at goal in a two-point defeat.

It has left Lolohea desperate to lift a major honour, and he told The Sportsman he would gladly pass up any individual prize along the way.

“Man of Steel points are nice but I’m all about winning,” he says.

“And I’ve not won a final. It’s a bonus being in the Man of Steel and me being there is off the back of my team-mates. People are rapping me but I feel like my team-mates make me look good.

“We want to be in the Grand Final and we are capable.

“I’ve been in three finals in the last three years but haven’t won any. Being really close and losing to Wigan in the last minute was heartbreaking.“

Huddersfield’s form in the immediate aftermath of their Cup Final defeat was stunning, with three consecutive victories in June. More recently however, it has been volatile, with Saturday’s loss at in-form Salford their fourth defeat in seven games.

“We want to be a top two team but at the minute we are up and down,” Lolohea admits with the Giants occupying third spot, one point clear of Catalans. “To be playing at Old Trafford we need to be consistent.” 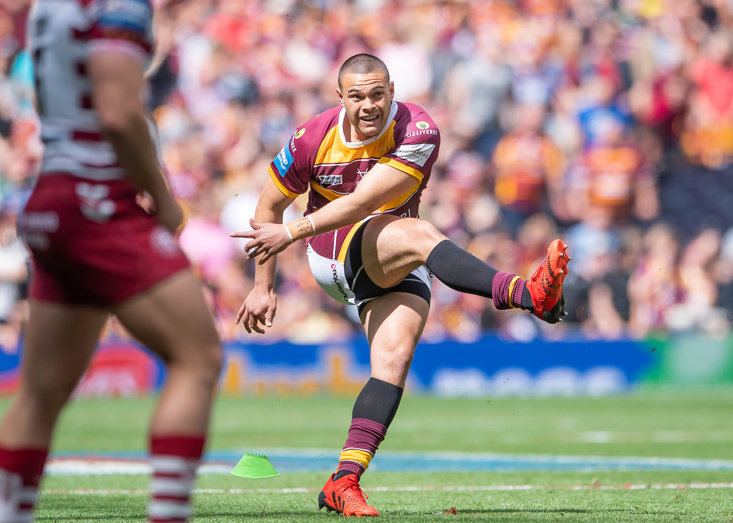 His own story is one of another career rescued by coach Ian Watson.

Having made his name at the New Zealand Warriors, Lolohea moved to Wests Tigers before Leeds Rhinos came calling to bring the Auckland-born half-back to the Super League in 2019.

But his arrival with great fanfare into a struggling team was a short-lived nightmare. Luckily for Lolohea, the then Salford coach Watson had been keeping tabs on his progress since his younger days in the NRL.

“Watto kind of saved me. I was at Leeds then found out I was leaving. I was in New Zealand when I found out and Watto met up with me as soon as I got back.

“There was a player swap with me and Rob Lui and I was playing for Salford the week after. Salford were winning games and I found form through the year, Salford made the Grand Final and then Watto left us.

“He wanted me to come to Huddersfield with him that year but I felt it was right for me to play out my contract at Salford. Huddersfield came in with an offer in May and now I’m having the best season of my career so far.”

“Watson is all about winning and knew what I was capable of and wanted to make me a better player. When he was at Salford he got a lot of players who were being shafted by clubs and changed them. Jackson Hastings, Lee Mossop, Greg Burke - he got these players to finals. He’s one of a kind.”

Lolohea has flourished under Watson’s guidance, and the simple coaching philosophy of treating players as people. It was something the player lacked on arrival into that Leeds team, and it has allowed his development into the kind of player the Rhinos thought they were signing.

“I buy into where Huddersfield is heading and I want to be a part of it as it’s a winning way.

“The way I play rugby suits a full-back. I was playing half-back and getting stuck on one side of the field. Now I get to roam and pop up where I need to be, which is my strength, to use my vision.

“Huddersfield hasn’t been like this before and I feel like this is the start of something. Watson is getting the best out of the veterans. The old people are playing career-best footy!”

Lolohea knows the Giants’ recent inconsistencies have to be ironed out immediately, with the regular season winding down and the playoffs looming large. The Giants still need points to cement their top-four place. But more importantly they need momentum to hit that playoff board at the kind of pace that propelled them to the Challenge Cup Final.