Boxing
News
While Jake seems out to exploit boxing, Logan is determined to give back to pro wrestling
Joey Mills
14:00, 07 Nov 2022

Logan Paul woke up on Sunday morning with a torn meniscus, torn MCL and a potentially torn ACL. The YouTuber had not been viciously attacked without provocation in a street brawl. He had not fallen down a flight of stairs. No, the host of the Impaulsive podcast was infirm due to competing for the WWE Undisputed Universal Championship in the main event of WWE Crown Jewel. The fact that Paul would be given such a slot was unthinkable even six months ago. But in Logan, WWE have found that rarest commodity. An outside celebrity that actually enhances the product.

In many ways, Paul’s WWE journey is the antithesis of his brother Jake’s boxing career. While the younger Paul tries to navigate the sport of boxing without doing anything that real boxers do. He cherry-picks fights with aging MMA stars rather than facing professional boxers. He challenges all and sundry but gets cold feet when real fighters like Hasim Rahman Jr step up to the plate. He calls out Saul ‘Canelo’ Alvarez for cowardice while boasting a 6-0 record entirely built on the backs of non-pugilists.

Contrast this with the way Logan has approached the world of professional wrestling. Rather than subscribing to Jake Paul’s School of Shortcuts, he has fully immersed himself in this most unusual industry. Paul has trained with WWE Hall of Famer Shawn Michaels, one of the greatest in-ring technicians that sports entertainment has ever seen. He has turned up in incredible shape for all of his matches. Paul’s three bouts so far have all garnered acclaim from fans and critics alike. There really is not much more Logan could have done to show respect and gratitude for his WWE experience so far.

WWE fans were understandably cautious when Paul signed with the promotion, initially for a tag team match at WrestleMania. Celebrities have been participating in wrestling for decades, with extremely mixed results. For every Mr T, a superstar headliner at the first two ‘Manias, there is a Snooki, the Jersey Shore flavour-of-the-month who somehow landed a bout at the height of her Z-list powers. For every Floyd Mayweather, who engaged in a rewarding match with The Big Show, there is a Jeremy Piven who forgot the name of the event he was participating in.

But Paul firmly belongs in the Mayweather/T bracket. Like those men, he has wholeheartedly thrown himself into the physical aspect of the game. So much so he threw himself through a table against world champion Roman Reigns on Saturday. In a high-octane stunt festival, Paul kept up with the company’s top star through a lengthy, physical encounter. Many expected Paul’s name to be used to draw money before he fell to a swift defeat at the hands of ‘The Tribal Chief’. Instead he entered a worthy main event performance that hinted at some intriguing future match-ups for the celebrity. 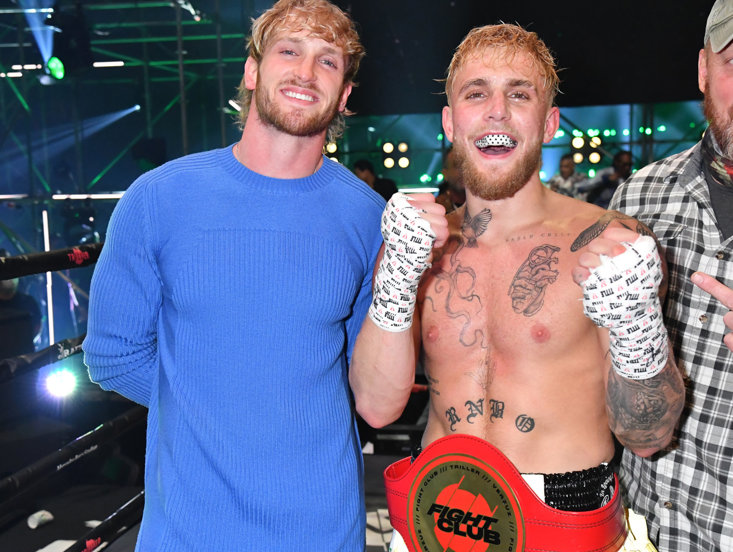 With his knees in the shape they’re in, those bouts will have to wait for now. It’s a crying shame as seeing Logan capitalise on the momentum of the Reigns outing would have been fascinating. But patience is a virtue and, moreso than at any time during his WWE career so far, fans will be incredibly happy to see him on his return. Respect is earned in the eyes of the WWE Universe, who would probably boo their own mother if she put on a bad match. That Paul has impressed in his ‘Mania tag outing and now in singles matches with Reigns and The Miz has earned him considerable credit.

Contrast this with the way Jake is still received by boxing crowds. While wrestling fans have seen Logan be extremely giving to the industry and his opponents, his younger brother still seems out to exploit boxing while giving little back. His efforts as the promoter for Amanda Serrano should be applauded, but his own career has largely been a drain on the sport. Logan wrestles like someone who loves the artform. Jake boxes carefully chosen opponents like a man trying to bleed boxing dry.

Jake himself seems to sense this. It was very interesting that in the wake of his unpopular win over Anderson Silva, which garnered bad press both for the age of his opponent and the rumours that it may have been fixed, Jake followed his brother to WWE. ‘The Problem Child’ was in Logan’s corner for the Reigns bout, even becoming physically involved. Does Jake see WWE as an easier avenue to acceptance than his stumbling boxing exploits? Perhaps he has realised the novelty has worn off from seeing him pound ex-UFC pensioners and that, short of facing an actual boxer, he needs to take his circus elsewhere.

There’s a natural solution to all this. After all, if Jake is willing to appear in WWE then the story writes itself. With the celebrity boxer already being accused of having fixed fights, why not shift to a discipline with predetermined outcomes? “WWE Tag Team Champions, The Paul Brothers” has a certain ring to it. Or perhaps we could see Logan vs Jake in the ultimate sibling rivalry? Wrestling allows for such scenarios to play out in a way competitive sports don’t. If Jake Paul won’t box a boxer, why not wrestle a wrestler? After all, it’s working a treat for the impressive Logan.