Athletics
News
The four-time olympic champion has his sights set on winning this race for an astonishing eighth time
Conor Keane
16:58, 22 Feb 2022

Sir Mo Farah is a British athletics icon and the nation’s most successful track athlete in the modern history of the Olympic Games. He's a bonafide legend on the track and the four-time Olympic champion is set to make a sensational return at the Vitality London 10,000 in May.

Farah has not raced since he fractured his foot in June last year, and he will have a point to prove having just missed out on selection for the 10,000m at Tokyo 2020. Turning 39 in March, he has no intention of retiring just yet and he has his sights set on winning this race for an astonishing eighth time.

It is an event he dominated for five years between 2009-13 and his most recent win came back in 2019, as the Covid-19 pandemic prevented the last two from taking place. It was in the 2010 race, though, that Farah set the British 10km record with a time of 27:44. As the current reigning champion, Farah will have that mental advantage above his competition and he will feel that more than enough time has passed for him to get in the best shape to cross the finish line first on home soil once again.

Given the physical demands of this sport, approaching 40, we won’t have Farah around competing at least at the highest level for much longer. So we must savour the few chances we get to see this Olympic great challenging for gold and there will be no better atmosphere than in London, where he achieved his first Olympic gold in 2012, for supporters to start saying farewell to him and congratulate him on the great career he has had.

Everyone remembers where they were on 4 August 2012. It was the peak of the London Olympic Games, when Farah capped off what was later dubbed ‘Super Saturday’ with his gold medal in the 10,000m in a 44-minute window where Team GB had already won two gold medals through Jessica Ennis-Hill and Greg Rutherford. 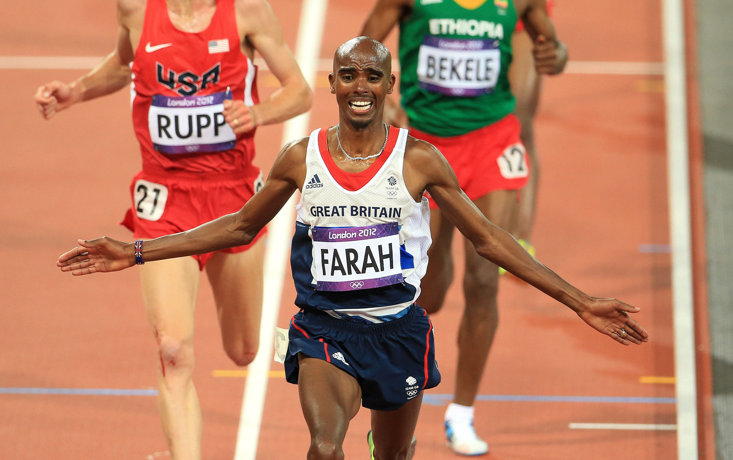 It was as if every household in the UK could be heard shouting “come on Mo!” as the Somalian-born track star headed toward the finish line inside the London Stadium. It was one of the greatest sporting moments in British history, and Farah has already established a lasting legacy for when he does decide to walk away from the track. Characteristically of the runner, he still feels that he has plenty more to give before that day comes and he is relishing the chance to return to the London 10,000 on 2 May.

Speaking about his impending return to the central London spectacle, Farah said: “I’m really looking forward to getting out there and racing again at an event that I really love. I’ve been working hard to get back into shape following my injury last summer and I’ve got a few more months of hard training ahead of me, so it’s good to have a target like the Vitality London 10,000 to work towards.

“I have great memories of the event. I have won it seven times and racing in central London is something you can never get bored of. The atmosphere among the thousands of participants is always fantastic and I can’t wait to be part of it again.”

This year’s course will start on The Mall before heading out through Westminster and into the City of London. It will take in some of the capital’s most iconic landmarks, including Admiralty Arch, St Paul’s Cathedral, Mansion House, the Bank of England, the Old Bailey, Somerset House, Big Ben and the Houses of Parliament, before finishing by Buckingham Palace.