“If ever there was one player, anywhere in the world, that was made for Manchester United, it was Cantona.

“He swaggered in, stuck his chest out, raised his head and surveyed everything as though he were asking: 'I’m Cantona. How big are you? Are you big enough for me?'”

Eric Cantona became a Red Devil - for many the Red Devil - back in 1992, following a £1.2m transfer from Leeds United, though it is easy to forget that the man from Marseille had played for six different clubs over a 10-year period before his arrival in England, for ‘King Eric’ will be eternally synonymous with his five years as a Manchester United player.

Almost a quarter of a century on from the moment he shocked the football world by announcing his retirement from the beautiful game at the age of just 31, there may very well be a Return of the King at the Theatre of Dreams.

Rumours are currently abound that the Manchester United hierarchy are attempting to orchestrate an ambassadorial role for Cantona, which would see him become a physical rather than just a spiritual part of the fabric of the club once more.

There are many footballers who are crowned, but there is only one King of Kings. But why Cantona, a man who spent just five years as a Manchester United player? Sentimentality can be foolhardy, it can often hinder and blight progression. But try telling that to a Manchester United fan.

Not only did Cantona help trigger an era of unequalled success for the club, beginning with a first league title in 26 years in 1993, the man survives in the consciousness of the devout fanbase. He scored 82 times in 185 appearances, his teamsmanship also illuminated in his 56 assists in 156 Premier League appearances (“T’was a pass” he pinpoints in the film Looking for Eric as his best moment in a United shirt). 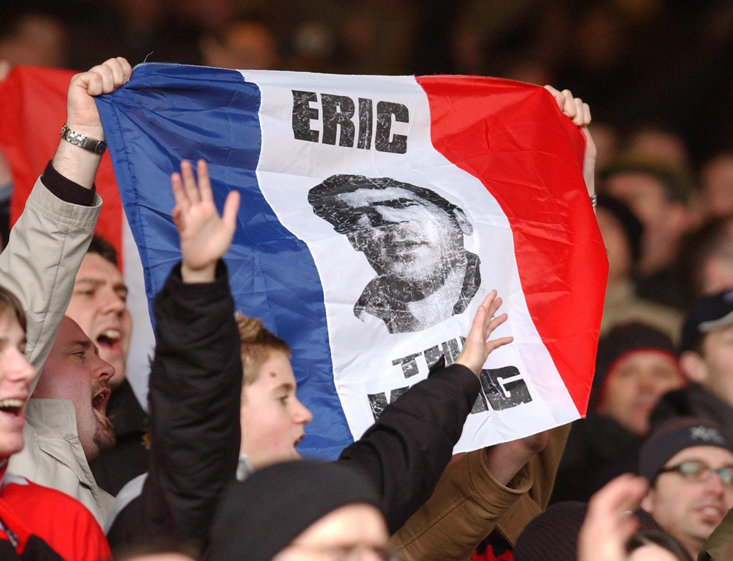 On the pitch Cantona had an unpredictable temperament that refused to be bottled, and few wished it to be should it have consequently denied the potent moments of electricity and magic that helped make the early days of the Premier League so riveting. The inability to contain or even define a personality is attractive, magnetic. Furthermore, for Manchester United fans it would ultimately become the expression of a man who was literally ‘an outsider’ and could come to love a club as much as a local, the heart-breaking separation that punctuates the very best romance narratives.

Cantona’s aura and contribution in England is acknowledged by those far from being fans of the club, particularly as he is now seen to have blasted open the door for the endless supply of talent from abroad the Premier League has been privileged to see since. His wider visibility was also evidenced in a groundbreaking sponsorship deal with Nike.

At the start of the 1992/93 Premier League season, 22 top tier teams had a total of just 13 non-British players on the pitch, mostly from Scandinavia. Eric Cantona was French, fiery and fascinating.

When asked later if he had had any regrets about his infamous kick on Crystal Palace fan Matthew Simmons, who had been repulsively taunting him from the Selhurst Park stands, Cantona would say yes... “I didn’t punch [sic] him strong enough. I should have punched him harder.” 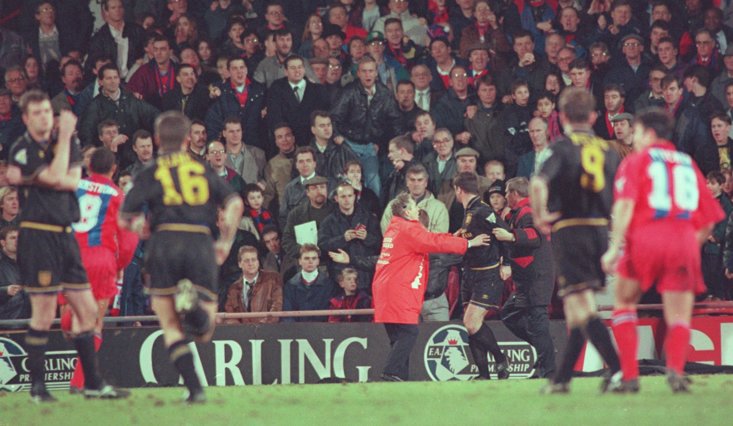 It is the sheer iconography of the man, the monobrow, the soundbites. Imagine you were playing a game of charades, with Cantona the subject of the round. One would only have to turn their collar up to prompt the right answer.

This was most recently epitomised in the video to Liam Gallagher’s single ‘Once’, which depicted the former Oasis frontman and dyed-in-the-wool Manchester City supporter acting as servant and butler for the magisterial Cantona who, quite naturally, takes centre stage with throne, crown and gown.

The bond between the player and the Manchester United fans, however, resonates in its unbreakablity, the strength of the reciprocal affection unlike any other seen in sport. Unlike, say, the club’s greatest-ever goalkeeper, the treble-winning Peter Schmeichel who cartwheeled his way eventually to rivals City, or Cristiano Ronaldo, who, though apologetic, scored for Real Madrid at Old Trafford, or even Roy Keane, who has drawn lines between himself and Ferguson and posited fans in two different camps. Cantona is not even blighted by national affiliation, having a notoriously underwhelming international career for Les Bleus.

For Manchester United and its supporters, Cantona is the unblemished golden calf.

In December 2009, Cantona was interviewed on the Friday Night with Jonathan Ross show, the Frenchman immediately greeted from the green room by enthusiastic terrace chants from Red-affiliated audience members.

When asked by the eponymous host where he had enjoyed his life the most, the response from Cantona was instantaneous: “It was when I was in Manchester,” he cooly delivered, to rapturous celebration. And that affection is returned, having been voted the club’s greatest-ever player in 2001 - not a bad feat considering the illustrious names of those he had followed, like Meredith, Edwards, Charlton, Best, Law and Robson.

Though having long departed the team, the success in 1999 is partly attributed to him, and the influence he imbued through equal parts talent and charisma on his younger and contemporary cohorts, many of whom would form the backbone of that treble-winning side. Cantona’s presence permeated. Even today, when a new attack-minded player is brought to Old Trafford, the question perpetuates, ‘Can they have the Cantona effect?’ such was the case with January 2020 arrival Bruno Fernandes.

In the last decade, Manchester United have endured a well-documented peregrination through a seemingly endless maelstrom that has contrasted sharply with the dominance and competitiveness of Ferguson’s reign up to his retirement in 2013. Before the unfortunate hiatus to the 2019/20 season, United were enjoying an 11-match unbeaten run, progressing in both the FA Cup and Europa League, as well as vying for a coveted Champions League qualification spot in their domestic league. On three occasions this year have United beaten their cross-town rivals City, whose superiority has been evident over the past decade.

Spirits are highest in a long time for the red side of Manchester, a sun shining over Stretford, but a return for Cantona would lift spirits to their highest in many a year.

The King abdicated Old Trafford in 1997, but his kingdom still awaits his return. The King is Red. Long live the King.