It was supposed to be an occasion to celebrate for Arsene Wenger, but his 1000th game in charge of Arsenal soon descended into a living nightmare.

The Frenchman reached that milestone at Stamford Bridge on this day six years ago, but 22 March 2014 is not a date Wenger will recall with any fondness, after his team were dismantled by Jose Mourinho’s Chelsea.

The Gunners made the trip across London with renewed optimism. The season had started badly with a 3-1 home defeat by Aston Villa, but Arsenal proceeded to win 11 of their next 13 Premier League encounters, to establish themselves as the campaign’s early pace-setters.

They stuttered in December, losing 6-3 at Manchester City and drawing with both Everton and Chelsea, but followed that up with a run of five straight victories.

Wenger’s charges remained top of the table until February’s 5-1 demolition at the hands of Liverpool, who had emerged as contenders thanks to a blistering run beginning at the turn of the year.

Arsenal then eased past Sunderland either side of dropped points against Manchester United (a 0-0 draw) and Stoke City (a 1-0 loss), but a narrow victory over Tottenham Hotspur at White Hart Lane a week prior to their trip to Stamford Bridge suggested  that they were still alive and kicking in the title race.

Chelsea had championship aspirations of their own in Mourinho’s first season back in English football. Indeed, they led the league at the time of Arsenal’s visit, with their London rivals and Liverpool both four points back, and Manchester City six points adrift of top spot.

However, the Blues had played one more game than each of Arsenal and Liverpool, and a whole three more than City. There was, therefore, still plenty to play for as April came into view.While this match was principally significant in terms of the title race, there was plenty of intrigue surrounding events on the touchline too.

A few weeks earlier, Mourinho had lambasted Wenger as a “specialist in failure” after the latter had suggested that “fear of failure” was the reason his rival managers tended to downplay their side’s chances of finishing the campaign on top of the pile.

This was the first time that the two men were to go head-to-head since that exchange.

It did not take long for the afternoon to descend into disaster for Wenger. Chelsea came flying out of the traps and were ahead inside five minutes, with Arsenal made to pay for some incredibly lax defending.

Alex Oxlade-Chamberlain carelessly ceded possession in the centre of the park, but a better off-the-ball shape could have prevented Chelsea from capitalising. As it was, the hosts tore into the open space ahead of them and drew first blood through Samuel Eto’o, who collected Andre Schurrle’s pass and curled the ball expertly into the far corner.

Creator turned converter just two minutes later. Arsenal were again caught on the ball in midfield and unable to handle the speed of Chelsea’s transition, which ended with Schurrle firing home from the edge of the box.

Things went from bad to worse for Arsenal in farcical circumstances soon after, as Kieran Gibbs was sent off in a case of mistaken identity after Oxlade-Chamberlain had handled Eden Hazard’s shot (which was going wide anyway) on the goal-line. To add insult to injury, Hazard coolly converted from the penalty spot.

Three goals and one man down, Arsenal were in effect dead and buried after a quarter of an hour. But Chelsea did not let up, and they had a fourth shortly before half-time when Oscar latched on to Fernando Torres’ low cross. In the away dugout, Wenger looked shell-shocked.

Arsenal survived until the 66th minute without another concession, before Oscar intervened to grab his second of the afternoon. It was a comedy of errors for the visitors; Tomas Rosicky overhit a pass to Mikel Arteta in a dangerous area, while Wojciech Szczesny palmed a saveable shot into his own net.

Chelsea had their sixth before too long, Mohamed Salah getting in on the act to complete an utterly miserable afternoon for Wenger.

Neither of these sides ended the season as champions, with Manchester City ultimately pipping Liverpool to the post. Avoidable and surprise losses to Crystal Palace and Aston Villa proved costly for Chelsea, but Mourinho’s side responded by claiming the prize the following campaign.

For Arsenal, the former league leaders who had to settle for yet another fourth-place finish in 2013/14, this 6-0 thrashing was the beginning of the end of their title aspirations. 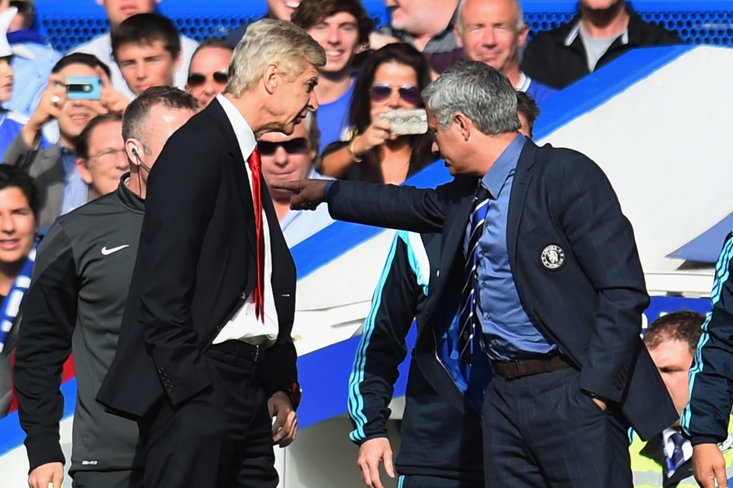