In the three full seasons of Jose Mourinho’s first spell as the club’s manager, Chelsea conceded just 61 goals in 114 Premier League matches. In each of those campaigns the Blues’ backline was breached on fewer occasions than any of their top-flight rivals.

Never once in that period – nor in the six fixtures Mourinho oversaw at the start of 2007/08 – did Chelsea concede four goals in a top-flight game. Middlesbrough, in February 2006, were the only team to register three times against Mourinho’s watertight defence.

The Portuguese’s departure from Stamford Bridge in September 2007 threatened to derail Chelsea’s campaign before it had really begun. Mourinho was replaced in the dugout by Avram Grant, whose first two matches in charge yielded a solitary point to leave the west London outfit down in eighth place, seven points adrift of Arsenal at the summit of the standings.

From there, though, Chelsea rallied. This was still an immensely talented side and, perhaps more significantly, one that possessed leadership, character and resolve in abundance.

They proceeded to win seven of their next eight top-flight outings, and although they fell to a 1-0 defeat by Arsenal in the middle of December, Grant’s side subsequently embarked on an impressive unbeaten 12-game run that saw them collect 30 points from a possible 36.

Chelsea therefore arrived at White Hart Lane on 19 March 2008 with their title aspirations very much alive. Manchester United and Arsenal had each amassed three more points than the Blues, and the table-topping United also had a game in hand.

Nevertheless, Chelsea knew that both of their rivals for the championship crown still had to travel to Stamford Bridge, where the hosts had not been beaten in the Premier League for over four years. Victory over Spurs would keep the Blues on track to win a third title in four seasons.

Tottenham, however, were desperate to halt their rivals in their tracks, despite also being keen to avoid an Arsenal triumph in 2007/08. A month earlier, Juande Ramos’ charges had overcome Chelsea at Wembley to win the League Cup, emerging victorious thanks to Jonathan Woodgate’s goal in extra time.

Now Tottenham, who had little left to play for themselves, were determined to play a part in denying Chelsea another piece of silverware.

Ramos picked the same side that had beaten the Blues across north London a few weeks prior, but it was the revenge-seeking visitors who began the game stronger. Didier Drogba nodded Chelsea into the lead in the third minute, ghosting in at the back post to convert from John Terry’s cross.

Grant’s side had the ball in the net again soon after, only for the linesman’s flag to deny Joe Cole after more fine work from Drogba.

Tottenham eventually settled and began to spring a few passing moves together, belatedly giving Chelsea something to think about at the other end. Parity was restored in the 12th minute, Woodgate rising highest to head the ball past Carlo Cudicini from Jermaine Jenas’ excellent free-kick.

Their joy did not last long. Chelsea were in front again just eight minutes later, Michael Essien cutely dinking the ball home with the outside of his right foot after some fine work in the build-up from Salomon Kalou and Cole.

Chelsea looked comfortable for the remainder of the first half, despite the home crowd’s efforts to roar their team into the ascendancy. There were no more goals in the opening 45 minutes but Chelsea extended their advantage soon after the restart, Cole getting in on the act after skipping past Pascal Chimbonda.

Tottenham suddenly had a mountain to climb. 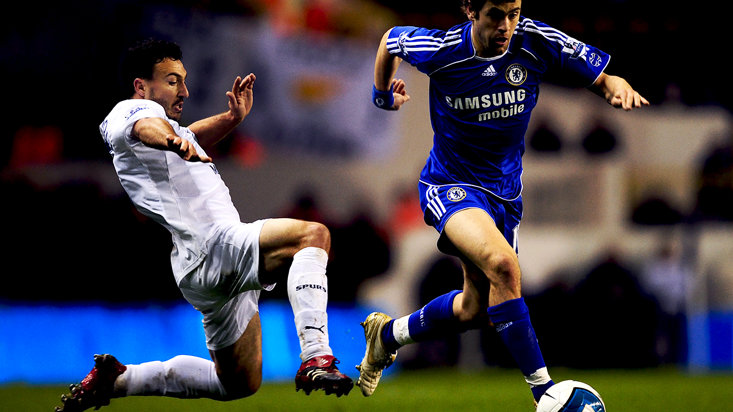 Yet, a set-piece once again proved the undoing of Grant’s side. Tom Huddlestone’s corner was met with a brilliant looping header from Dimitar Berbatov – a player who never got the credit he deserved for his aerial ability – to halve the deficit on the hour mark.

Spurs were almost level within three minutes, but Cudicini pulled off a remarkable save to deny Robbie Keane from seven yards.

Tottenham continued to pile forward and, once again, their reward came from a dead-ball situation. Keane’s corner evaded several players inside the Chelsea penalty area, allowing Huddlestone to lash the ball into the far corner with a wonderful left-footed strike.

White Hart Lane went delirious, and it seemed like there would only be one winner from here.

But even though the momentum was against them, Chelsea were not prepared to give up. The visitors were back ahead within five minutes, Cole finding the top corner after another piece of poor defending from Chimbonda. Spurs, both on the pitch and on the terraces, looked deflated.

There was, however, still time for one final moment of drama. Didier Zokora aimed a long pass forward in the direction of Darren Bent; the ball bounced off the back of Ricardo Carvalho and fell at the feet of Keane, who bent a superb first-time strike past Cudicini and into the Chelsea net.

For the third time that night, Tottenham had come from behind to draw level.

“It was a good game for the supporters but not for us because we wanted to win and we haven't done it,” Grant told BBC Sport after the game.

"When you lead a game three times and don't win, the players are not so happy, especially when we have shown such a good spirit. But we are still in the title race and we will continue fighting."

Continue fighting they did, but ultimately it was not enough. Chelsea finished two points behind title winners Manchester United, who also beat them in the Champions League final a few weeks after the conclusion of the Premier League campaign.

It could have all been different had the Blues been defensively sturdier at White Hart Lane on that night in March.