Football
News
The two teams were scheduled to meet this weekend so we look back at their crazy play-off meeting in 2013
Elliott Bretland
08:55, 14 Mar 2020

“Here’s Hogg… Deeney!” roared the commentator with complete amazement, bouncing in his seat at what was unfolding in front of him.

Leicester and Watford were due to meet today before coronavirus stole the show but it has reminded us of one of the most classic football matches of the modern era, and while we might be lacking in actual football action this weekend, we thought we might as well reminisce about one of the most exceptional footballing moments ever between the two sides.

With the promised land of the Premier League on the horizon for both, they played out one of, if not the, most enthralling ends to a game in football history in the Championship play-offs back in 2013.

It was one of the most extraordinary, dramatic and crazy moments ever seen on a football pitch. It was complete pandemonium and unadulterated scenes. While the Hornets hit peak ecstasy, the Foxes suffered crushing disappointment. Into stoppage time, and the two sides were tied on aggregate with Watford 2-1 up at Vicarage Road. What happened next was seismic.

Anthony Knockaert went down in the area before the game can go to extra-time. This is it, all he has to do is score from the spot to send Leicester to Wembley in the final. However, from the penalty spot, he saw his penalty stopped as Manuel Almunia pulled off an incredible double stop.

The stadium was in raptures as the hosts kept their dreams alive. As they hugged and cheered, the unthinkable was about to unfold as the ball was cleared. Knockaert was clearly crushed but Leicester, forlorn, had to keep focus. They had to. 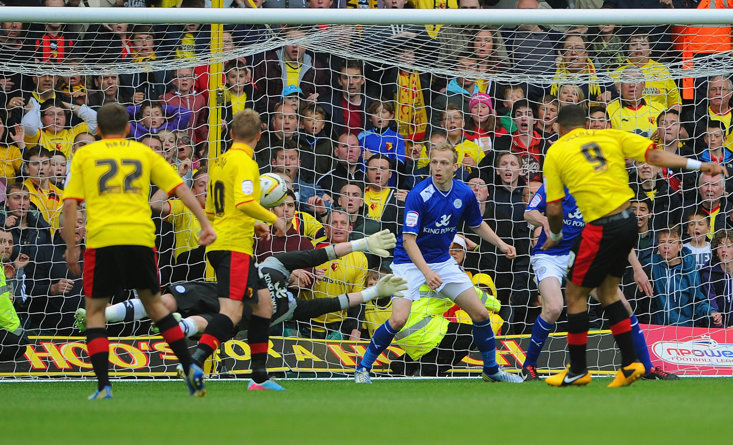 Fernando Foriestieri on the right swung in a ball to the back post for Jonathan Hogg and then time froze still. As Kasper Schmeichel made himself big in preparation for what was coming next, it opened up, it was really going to happen.

Hogg, showing impeccable awareness, headed the ball down into the path of Troy Deeney who lashed the ball home past a sprawling goalkeeper and helpless Leicester men on the line. It was hit and stayed hit, one of those you wallop and immediately know it is a goal.

As the striker lashed his shirt off, the entire ground erupted. Manager Gianfranco Zola and his staff on the touchline were buoyantly bouncing on feeling alone. However, for Leicester, everything crumbled. The dream was over.

“When I’m older I can look back on it,” Deeney told Tales From The Vicarage.

“Even though we went on to lose to Crystal Palace in the final, the fans still have that day… That goal does prove that it’s never done until it’s done. That goal shows the magic and beauty of football. It’s why we love it, for moments like that.”

It’s fair to say both sides have enjoyed good times since, with Watford a Premier League regular and Leicester, shock Premier League champions. Not even the greatest screenwriter could have conjured up this one and what followed. Complete goosebumps. Sport, there’s absolutely nothing like it.