Golf
News
The South African posted a lead of six under par on the first day at Royal St George’s
Conor Keane
20:07, 15 Jul 2021

Day one of the British Open got off to an exciting start at Royal St George’s on Thursday, with Louis Oosthuizen the current clubhouse leader.

The South African and former Open champion Oosthuizen set the early pace on as he posted a lead of six under par. The 2010 winner rescued par on the 18th to record a bogey-free 64 as the Kent venue welcomed the return of crowds, with around 32,000 in attendance.

Oosthuizen has gone close to adding to his major tally on a few occasions since his Open victory at St Andrews just over a decade ago, with six runners-up finishes including the 2015 Open.

"It gives me confidence going into majors knowing that I'm still competing in them and I've still got chances of winning,” said the 38-year-old.

"But once the week starts, I need to get that out of my mind and just focus on every round and every shot.”

Oosthuizen also said patience is key to performing well at golf's showpiece events and he opened with seven successive pars before making three birdies after that. Three more followed in the space of four holes on the back nine to send him clear at the top. He was forced to scramble on the 18th after finding a bunker with his drive, chipping out and then successfully making an up-and-down to stay one ahead of Jordan Spieth and Brian Harman. 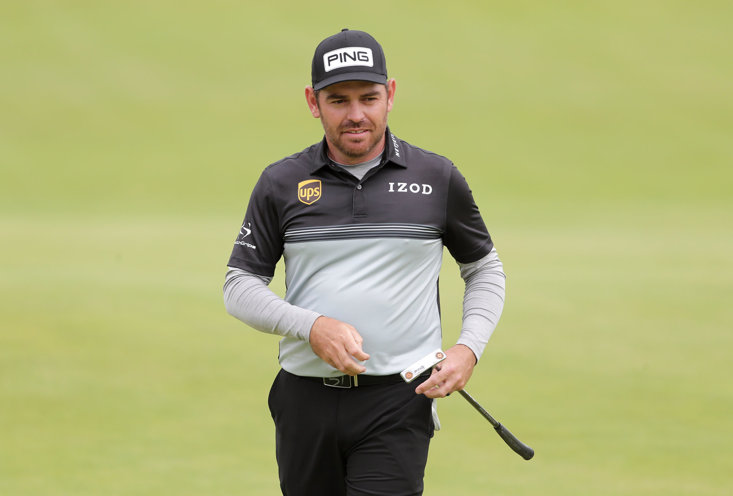 The pair finished on five under par in a day which was contested in warm but windy conditions on the coast.

Since The Open was last played two years ago, six major winners have been crowned, with last year’s Championship being cancelled as a result of the Covid-19 pandemic. The last winner to lift the famous Claret Jug was Shane Lowry at Portrush and the Irishman opened his defence on Thursday with a one-over par score of 71.

Lowry struggled but a 71 wasn't a bad return, and it would've been even better but for a bogey on the last. “It was a very special day for me,” said Lowry. “The announcement on the first tee, I've been waiting over a year for that, so it's quite nice. It was quite unsettling at the start and I got off to a pretty nervy start. I battled hard for the rest of it.

“I was disappointed to bogey the last. I think if I would have parred the last and shot level par, I would have been quite happy with myself going home this afternoon, but I didn't.

“But I battled hard – I was quite proud of myself. On to tomorrow.” 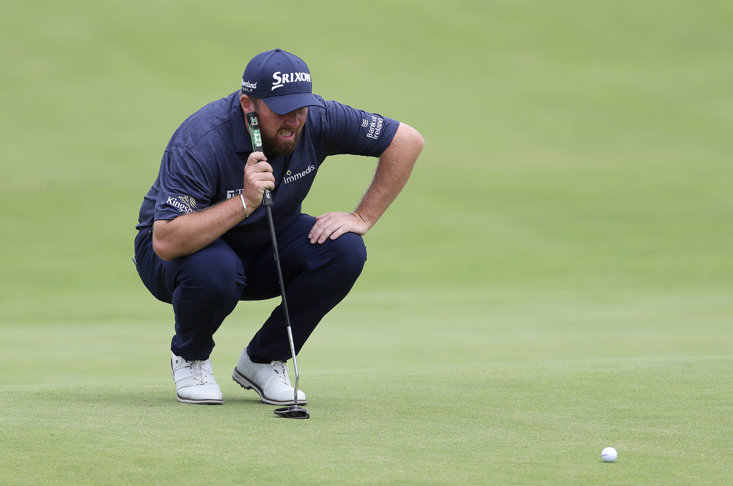 US Open champion Jon Rahm will be disheartened, but not by much, after he finished one-over par. Englishman Justin Rose finished the day with three under par and his compatriot Tommy Fleetwood had an impressive first day too as he recorded three under par with the crowd behind him.

American world number one Dustin Johnson got his campaign off to a pressing start as he also recorded two under par. He played some good shots on the opening day but could not match the high-level performance of Oosthuizen.

Asked about the first day he said, “I thought I played very solid. Got off to a nice start. Struggled a little bit on seven, eight and nine. Kind of gave a few shots away there. Other than that, played really well.”

Fellow American Brooks Koepka ended the day with one under par after an expected impressive round, while Rory McIlroy, after a disappointing start to the day, was able to finish strong and ensure he finished with an even par.

x
Suggested Searches:
Manchester United
Liverpool
Manchester City
Marcus Rashford
Premier League
More
golf
USA Complete Ryder Cup Annihilation As Cantlay And Scheffler...
The USA regained the Ryder Cup on Sunday, finishing off a convincing exhibition of matchplay golf by [ ... ]
golf
Team USA Dominate Day Two Of Ryder Cup Leaving Europe With A...
Team USA stretched their lead to 11-5 on day two of the Ryder Cup at Whistling Straits after another [ ... ]
golf
Ryder Cup Pairings 2021 Day One: Rahm And Garcia Eye Up Titanic...
The Ryder Cup pairings have delivered once again. Europe will start by sending out world number one [ ... ]
golf
Everything You Need To Know About The 2021 Ryder Cup At Whistling...
The 2021 edition of the Ryder Cup begins on Friday a whole year after its initially scheduled start [ ... ]
golf
Will Shane Lowry Make It? Europe's Ryder Cup Qualifying Race...
The Ryder Cup kicks off later this month at Whistling Straits and Europe’s men will be hoping [ ... ]
golf
Kids In America: Rookie Duo Maguire And Castren Fire Europe...
The old cliche that youth has no fear is often thrown about in sport, but we saw just how nerveless [ ... ]
golf
Cantlay, DeChambeau Or Rahm To Win? All You Need To Know On...
The PGA Tour heads to the home of some of golf’s most breathtaking courses, Atlanta, with East [ ... ]
golf
Everything You Need To Know Ahead Of The 2021 Solheim Cup
The 17th edition of the Solheim Cup, one of the most prestigious events in golf, gets underway this [ ... ]
golf
Kevin Kisner’s Wyndham Win Shows His Importance To Team USA...
Golf’s showpiece team event, the Ryder Cup, is just over a month away as Team Europe prepare to [ ... ]
golf
Golf's Sibling Superstars Minjee Lee And Min Woo Lee Are Taking...
On Sunday, Australian golfer Minjee Lee overturned a seven shot deficit to beat South Korea’s [ ... ]
golf
Unflappable Collin Morikawa Wins The Open Championship After...
American Collin Morikawa has won the Open Championship’s Claret Jug for the first time after a [ ... ]
golf
Oosthuizen Holds His Nerve To Take One-Stroke Lead Into Final...
Louis Oosthuizen proved once again that he should never be underestimated, as even with a subpar performance [ ... ]
golf
Louis Oosthuizen Makes Open Championship History As He Tightens...
Louis Oosthuizen tightened his grip on the Open Championship with another phenomenal round that saw [ ... ]
golf
Rahm, Koepka Or Spieth? Simon Dyson Analyses The Open Championship's...
The oldest golf tournament in the world gets underway tomorrow as the world’s finest players meet [ ... ]
golf
Rory McIlroy Looking To End Major Drought At The Open Championship
Rory McIlroy will be hoping to make some history at The Open this week as he looks to become the second [ ... ]
golf
Simon Dyson Predicts “Fantastic” Koepka Will Triumph At The...
Simon Dyson has predicted that Brooks Koepka will win the Open Championship at Royal St George’s.  [ ... ]
golf
Jon Rahm Becomes First Spanish Winner Of The US Open With Stunning...
Jon Rahm clinched his first major title and became the first Spaniard ever to win the US Open with a [ ... ]
golf
Can Brooks Koepka Make It Three Wins From Four At The US Open?
He may have dropped to number 10 in the world rankings, but Brooks Koepka’s showing in the opening [ ... ]
golf
Money Grab Or Needed Reform? Premier Golf League Could ''Revolutionise''...
The much-debated proposal of a Premier Golf League worth £250million is “entirely feasible” [ ... ]
golf
PGA Championship: Phil Mickelson Makes History As Oldest Ever...
Phil Mickelson, at 50 years of age, has become the oldest ever winner of a major as he put in an incredible [ ... ]
golf
British Masters: Richard Bland Claims First European Tour Win...
Richard Bland has been playing golf on and off the European Tour since 2002 and has never won a tournament. [ ... ]
golf
British Trio Leading The Pack At Halfway In The Betfred Masters
We’ve reached the halfway stage of the Betfred British Masters and it’s been a ball-striking [ ... ]
golf
Everything You Need To Know About The 2021 Betfred British Masters
European Tour golf returns to the UK this week for the first time since October with the Betfred British [ ... ]
golf
There's Plenty Up For Grabs As The British Masters Returns To...
European Tour golf returns to the UK this week for the first time since October with the Betfred British [ ... ]
golf
Matsuyama Makes Masters History To Inspire New Generation Of...
Hideki Matsuyama has written his name into golf’s history books by becoming the first Asian player [ ... ]
golf
Masters Round-Up: Hideki Matsuyama Races Into Four-Shot Lead...
Hideki Matsuyama shot a 65 on Saturday to leapfrog Justin Rose heading into the final day of the Masters [ ... ]
golf
Justin Rose Leads The Masters As Defending Champion Dustin Johnson...
Heading into the biggest weekend in the entire golfing calendar, Englishman Justin Rose leads the way [ ... ]
golf
Masters Round-Up: Justin Rose Leads The Way As Tommy Fleetwood...
The opening day of the Masters was all about Justin Rose who opened up a four-shot lead after hitting [ ... ]
golf
2021 Masters Tee Times & Pairings - Thursday 9th April
The pairings for the opening two rounds of the Masters in Augusta have been drawn and now we know exactly [ ... ]
golf
The Masters: Jordan Spieth Ends Four-Year Winless Run Ahead...
It’s hard to believe Jordan Spieth’s Masters triumph was six years ago. Now 27, [ ... ]