Romelu Lukaku might never get the praise he deserves. To some he’s the guy who flopped at Chelsea. To others he is the striker who got bombed out of Manchester United. There are some who will never like him just because of the colour of his skin.

But the Belgium striker just continues to bag goals, and after Inter’s Lukaku-inspired Serie A title in 2020-21 he now looks in the mood to give his national team their best shot yet at international glory. On Monday he scored one and had another narrowly chalked off as Belgium beat Finland 2-0 in St Petersburg as the Red Devils made it a maximum nine points out of their Group B campaign.

This will not go down in the annals as one of Lukaku’s great nights, nor as a classic Belgium performance, but when faced with a Finland side which clung on desperately to secure the point they needed to progress to the Round of 16, Lukaku never looked likely not to get on the scoresheet eventually.

Backed by the returns to starting action of Kevin de Bruyne, Eden Hazard and Axel Witsel, Lukaku was always on the periphery of the match but remained forever dangerous. With De Bruyne picking and probing, it was an inevitability that Belgium would break through at some point. 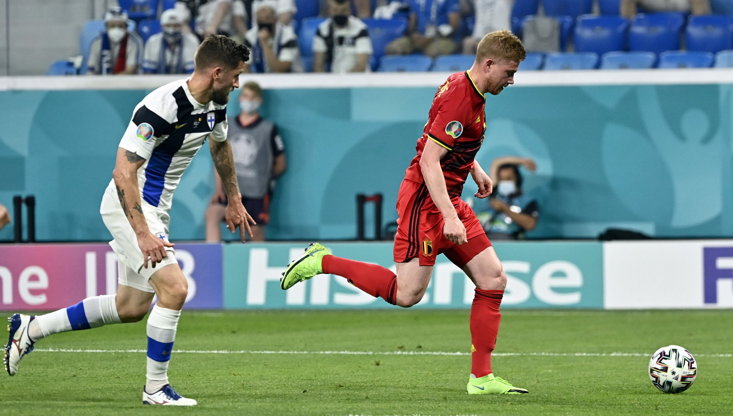 They looked to have their lead when Lukaku turned into space and fired home brilliantly on the hour mark, but a very late VAR review delayed the inevitable. Moments later, Thomas Vermaelen flicked a corner goalwards and the ball ended up in the net via Finnish keeper Lukas Hradecky.

Lukaku soon made it two, rifling home after outstripping a tiring Finland defence. He was simply too much to handle with his intelligent movement and his unstinting work ethic. His goal was his 63rd for his national team. Yes, 63! He’s just turned 28.

In a world in which Lionel Messi and Cristiano Ronaldo are rightly given heaps of praise for the quality they bring to games of football, Lukaku doesn’t get nearly enough recognition. Maybe if he plays a major part in a Belgium win at Euro 2020 he will finally get the plaudits he deserves in the quantities of which he is worthy.