Romelu Lukaku scores on his debut. West Bromwich Albion, Everton, Manchester United, Inter Milan and now, at the second time of asking, Chelsea. At this point it feels inevitable that when the Belgian dangerman arrives at your club, he will get off the mark in his very first appearance. There is also the promise of more to come, as Lukaku surpassed Ian Wright to claim 20th place on the all-time Premier League goalscorers table.

His goal in the Blues’ 2-0 win at Arsenal on Sunday was simple, but it’s impact cannot be overstated. Jorginho was Chelsea’s top scorer in the Premier League last season with seven goals, all scored from the penalty spot. Adding a man who now has 316 goals for club and country to a side that are already the reigning European champions looks to be an incredible piece of business.

Lukaku did not score during his first 15-game spell at Chelsea, but he did not have to wait long to put that right, with his first goal arriving after a quarter of an hour. Mateo Kovacic played a precise pass out wide to Reece James, the England defender squared it into the area and the new signing shrugged off Pablo Mari to dispatch the ball into an empty net.

Chelsea would exploit this same avenue multiple times throughout. Mason Mount, Kovacic, Kai Havertz and Jorginho all sent balls James’ way, and he would frequently look centrally to find the new man. One such move resulted in the Belgium international heading over, before being flagged for offside. Another saw Lukaku take the defence with him, freeing up space for James to slot in Mount for a blocked shot.

An inversion of this tactic would lead to Chelsea’s second goal. Lukaku rode a tackle in front of the Gunners’ box, Mount slotted the loose ball through to James, who finished beautifully into the top corner. Arsenal could not find an answer to this unwavering strategy from Chelsea, and it was clear that the wealth of attacking midfield talent at the club is relishing working with a world-class centre forward. 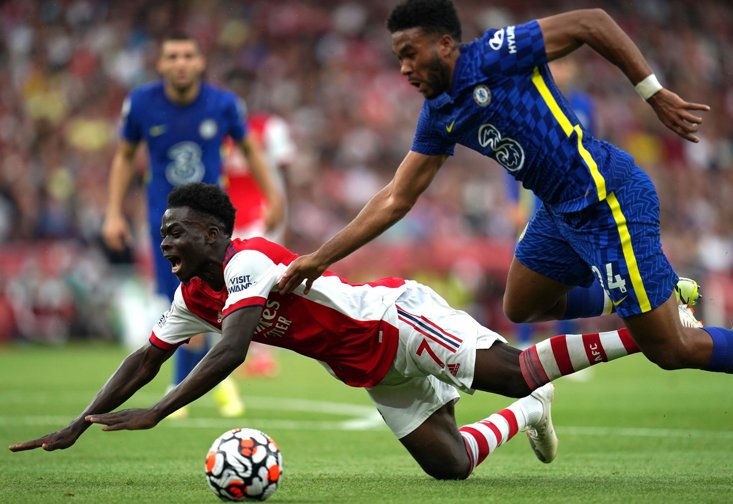 CHELSEA 2/1 TO BEAT LIVERPOOL ON SATURDAY WITH BETFRED

Mari caught the brunt of Romelu’s effervescent return to Chelsea. Physically overmatched and frequently outthought, the hapless centre-half fought a running battle with Lukaku. Unable to legally shake the former Inter man off the ball, Mari’s frustration eventually boiled over when he was booked for a reckless tackle from behind in the Chelsea half. Lukaku would spin Mari early in the second half, but the defender recovered in time to block his tormentor’s shot. Granit Xhaka and Albert Sambi Lokonga were tasked with preventing balls into the striker, but the pair left their defence exposed as Lukaku frequently received the ball to feet from his midfield and from James in the wing-back role.

Arsenal enjoyed more success in the second half, threatening the Chelsea defence on numerous occasions with speedy counters. The threat of Lukaku still lingered though, with the frontman taking up residence on the shoulders of the last defender, intelligently hunting for openings. Mount played him through in the box just past the hour, before a swarm of red shirts blotted out the chance.

The ex-United striker pulled out to the right hand side to collect the ball, before a smart run to the centre drew a foul, a booking for Lokonga and a free-kick in a dangerous area. Lukaku’s willingness and determination to cover wide areas, even when his side slowed down, demonstrates the extra layer he adds to the Chelsea attack. Mount crossed for the forward late on, and Lukaku saw a powerful header tipped onto the bar by Bernd Leno. Disappointed, he stopped to acknowledge the Chelsea away support who were ceaselessly chanting his name.

Romelu Lukaku boasts a dangerous combination of physicality, speed, intelligent reading of a game, and finishing that has vastly improved since his last spell on these shores. While a single game is tricky to judge, the evidence at the Emirates today suggests Chelsea have made an inspired move by bringing Lukaku back into the fold.