Amongst all of the elite athletes gathering at the World Championships in Doha, not many have a story quite like South African long jumper Luvo Manyonga. In 2012 his career looked to be over after he was banned for 18 months for failing a drugs test, something several athletes have done during their career as they look to gain an advantage by taking performance-enhancing drugs.

But Manyonga wasn’t taking drugs to enhance his athletic performance. He was addicted to crystal meth.

In his own words, he was just ‘five per cent away from death’ at his lowest point yet this week he will look to defend his crown as the men’s long jump world champion. It is a quite remarkable turnaround for an incredible athlete with the world record in his sights.

His turbulent journey to stardom began in his homeland. With an unquestionable talent, he became world junior long jump champion in 2010 before finishing fifth at his first senior World Championships the following year at the tender age of 20. By that point, though, he had already had his first experience of crystal meth.

In an interview with the Independent last year he explained: “I was just this nosey kid growing up, wanting to have fun, experience things. I was 18 when I first did it. I was with my friends, we had a little bit too much to drink and then things went overboard and we started trying things, everything.”

When things seemed to be going from strength-to-strength in the young star’s career, tragedy struck. His trainer and good friend, Mario Smith, died in a car crash on his way to training. This was made worse by the fact that Manyonga had been living with Smith to be closer to the national training complex and was left alone after his death.

It is perhaps too easy - naive even - to pin this as the pivotal moment for the long jumper, who was on the hunt for ‘fun’ from a young age.

“There was no one thing. I was just a kid in a township with money, wanting to have fun. I didn’t know that I was going to get hooked and become an addict and stuff like that. I got too caught up in it.

His 18-month ban came at the worst time as he missed the London Olympics as a consequence, but help would come from an unlikely source as he attempted to reverse the spiral. Irishman John McGrath, a conditioning coach, was holidaying in South Africa in 2010 and couldn’t bring himself to leave, such was his love for the country.

He caught wind of Manyonga’s talent and tracked him down after multiple trips to Mbekweni. In 2014, the coach told the African publication Mail & Guardian: “As far as I can tell, there are only two ways he can go: he’ll either be standing on an Olympic podium, or he’ll be dead from an overdose by the time he’s 30.”

He was right. Two years later he stepped onto the podium at Rio to collect his Olympic silver medal and he will look to go one better than that in Tokyo next year, having missed out on the gold by only a single centimetre in Brazil.

McGrath continued: “I have travelled to 57 countries around the world for one thing or another and never, in 30 years, have I seen someone as straightforwardly gifted as Luvo.”

This gift, along with the hard work he has put in over the last few years has taken him from promising youngster to world champion. His win at the World Championships in London in 2017 was the crowning glory of his career so far but defending his crown in Doha would quite possible beat that achievement.

He added: “My life doesn’t depend on sport, because I’m also a human being. My every day is about trying to change someone’s life. I’m not ashamed to talk about my past, as long as it’s helping someone else.”

“I’m hoping others who are following me can say: it doesn’t matter the situation, it doesn’t have to be a substance — sometimes it’s life itself — and other people can use my experience to change their situation. I’m a person who has experienced all things: from nobody to someone.”

His is quite the redemption story.

Luvo manyonga
@lvjumper7
All went well at the office and thank you all for the wishes..8,35m 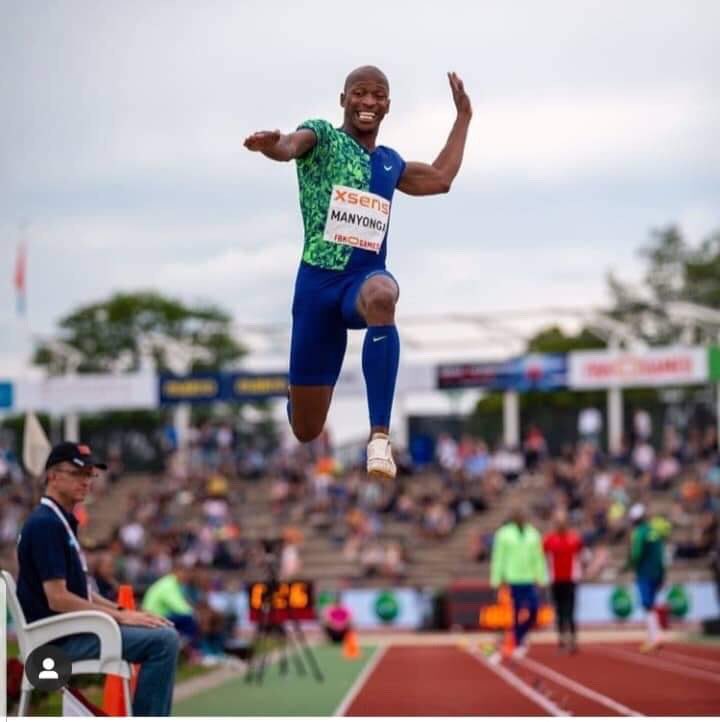 19
267
More
athletics
How Marathon Runners Can Stay Focused And Feeling Good During...
There are many of us who should have been making our final preparations for a marathon right now. With [ ... ]
athletics
Team GB's Tom Bosworth May Not Travel To Olympics Over Coronavirus...
Team GB’s top racewalker Tom Bosworth may not travel to the Olympic Games this summer, if we do [ ... ]
athletics
Gender Balance Is A Reality At Tokyo 2020 Thanks To Flag-Bearer...
The Olympics Opening Ceremony is one of the most iconic events on the planet. Every country’s [ ... ]
athletics
Five Tokyo 2020 Stars Who Will Be Surfing, Skating And Climbing...
157 days. That is all that is left between today and the opening ceremony at the Tokyo Olympics, the [ ... ]
athletics
Dina Asher-Smith Will Welcome Fraser-Pryce's Decision To Do...
The stage is set. The gauntlet has been laid down. In Tokyo, Team GB’s Dina Asher-Smith will be [ ... ]
athletics
Book Review: The Runner By Markus Torgeby
As the publishing industry is the envy of the Premier League, in that it takes a midwinter break and [ ... ]
athletics
The Exo-Skeleton Suit That's Helping Smash Limitations And Break...
With all the criticism surrounding VAR in football at the moment, it is important to take a moment to [ ... ]
athletics
The Running Trainers So Good They Could Be Banned By World Athletics
Ever heard of the running trainer that made athletes too quick? Nike’s record-breaking running [ ... ]
athletics
Taking The Knee & Hand Gestures Banned From ''Politically Neutral''...
More than half a century after Tommie Smith and John Carlos created one of the most prevailing, [ ... ]
athletics
Alistair Brownlee Sets His Sights On A Tokyo 2020 Triathlon...
The lure of Tokyo 2020 is just too much for Alistair Brownlee, who has said he aims to compete at this [ ... ]
athletics
With Lessons In Hygiene And Hydration, Team GB Targets Medal...
UK Sport are hopeful that the 2020 Olympics in Tokyo will be the most successful of all time for Team [ ... ]
athletics
Paris Olympics 2024: Surf’s Up...10,000 Miles Down The Road,...
Excited for Tokyo 2020 yet? Well before we dive headfirst into athletics action in Japan there’s [ ... ]
athletics
Coaching US Runner Jordan Hasay Is The Next Chapter For Paula...
Paula Radcliffe is remembered for many things, being a world record holder, crouching to relieve [ ... ]
athletics
Nick Butter Becomes First Person To Run 196 Marathons In 196...
The Sportsman’s favourite marathon man Nick Butter has completed his incredible target of running [ ... ]
athletics
Groundbreaking Gene Testing Could Spell The End Of Doping In...
Doping has long been the scourge of sport. Some of the most high-profile names have been found [ ... ]
athletics
Top Athletes Left In Shock As 200m Is Cut From Diamond League...
The Diamond League has announced that the 200m will be one of four events cut from its core events in [ ... ]
athletics
Hand Washing And The Marginal Gains Helping Team GB Succeed...
Hygiene will be a key component as Team GB look for marginal gains at Tokyo 2020. It may sound a little [ ... ]
athletics
Nothing Left To Chance As Eliud Kipchoge Attempts First Two-Hour...
This weekend, the fastest marathon runner ever will attempt to record an athletic achievement that will [ ... ]
athletics
Five Things We Learned From The World Athletics Championships
The controversy-stricken World Athletics Championships came to a close on Sunday evening with Great [ ... ]
athletics
Katarina Johnson-Thompson's Journey from Imposter Syndrome To...
Prior to this year, the World Athletics Championships has consisted of tears, despair and heartbreak [ ... ]
athletics
Smooth And Efficient Noah Lyles CAN Beat Bolt's 200m World Record
“The man ran incredible times... I'm going to break that, and then I'm going to get even [ ... ]
athletics
Empty Seats Take Shine Off Dina Asher-Smith’s 100m Silver Medal
As Dina Asher-Smith took to the starting blocks for the women’s 100m final, silence descended [ ... ]
athletics
On This Day in 1936: Jesse Owens Wins 100m Gold In Front Of...
Since assuming the role of Chancellor of Germany in 1933, Adolf Hitler had earmarked the 1936 Summer [ ... ]
athletics
One Year To Tokyo 2020: Five New Sports Set To Make An Appearance...
We’re just one year away from the opening ceremony of the 2020 Olympic Games in Tokyo and with [ ... ]
athletics
Justin Gallegos Creates History After Becoming The First Ever...
A runner known as Justin “Magic” Gallegos has made history after he was unveiled as the [ ... ]
athletics
Woman Drives Car Through Plymouth Half Marathon
The scene was set, a glorious Sunday on the Devon coastline, Plymouth bathed in sunshine as thousands [ ... ]
athletics
Nick Miller Creates Commonwealth Games History As Tom Bosworth...
The opening day of the Athletics competition at the Commonwealth Games saw a duo of English athletes [ ... ]
athletics
Five English Athletes Gunning For Commonwealth Games Glory
April will see the elite of English Track and Field descent descend upon Australia for the XXI Commonwealth [ ... ]
athletics
Roger Bannister’s Legacy In Anti-doping Should Not Be Forgotten
On Sunday British sport lost one of its icons. Roger Bannister, the first man to break the four-minute [ ... ]
athletics
Christian Coleman Roars To 60m Gold At The World Indoor Championships
The retirement of Usain Bolt was a cause for consternation among many athletics fans last summer [ ... ]
This website uses cookies
Cookies help us and our partners provide statistics. By browsing this website, you consent to the use of cookies in accordance with our Privacy Policy and Cookies Policy.
Accept & Close