With two goals and a scintillating display in Manchester City’s 5-2 win over Southampton, it is now clear. Riyad Mahrez is playing the best football of his City career and surely the best we have seen from him since he scooped the PFA Players’ Player of the Year award, along with the Premier League trophy for Leicester City, in 2016

At Man City, where many people thought he would be simply an expensive benched commodity, he has now emerged as one of Pep Guardiola’s key players, relied upon for the big games. The Algerian winger has now started the last six Premier League games on the trot and eight of the last nine, playing the full 90 in seven of those. It is perhaps telling that even in the loss to Manchester United, Guardiola once again trusted Mahrez to start in a clash in which prior to this season he was more likely to be left on that bench.

In that right-wing role which Bernardo Silva and Raheem Sterling have filled at various times in the past, Mahrez has become City’s key attacking threat and we saw the best of his marvelous left foot in an enthralling Etihad encounter on Wednesday. The opener was netted by Kevin De Bruyne, who also bagged a brace, the Belgian converting off the bar after Alex McCarthy had spilled a Phil Foden shot.

James Ward-Prowse equalised for the visitors with his second penalty in two matches after Jannick Vestergaard was judged to have been pulled to the ground by Aymeric Laporte. That goal was justified for the Saints, who had made a bright start to the game and dominated possession up until De Bruyne’s opener. 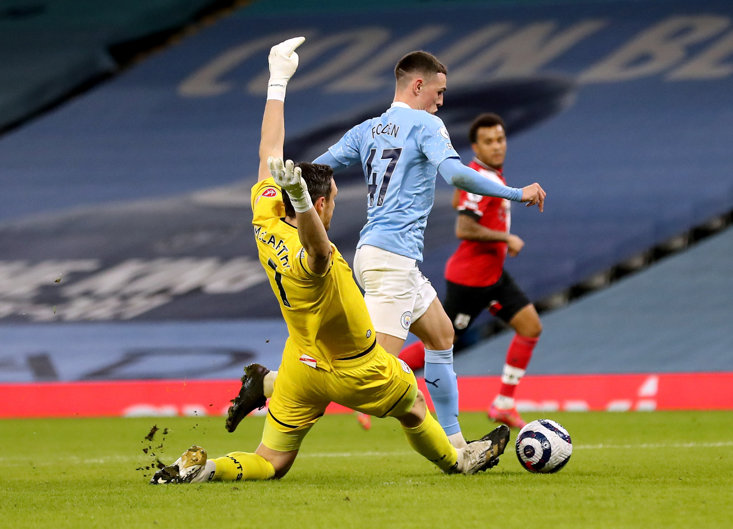 VAR’s failings were then exposed once again as Foden ran through and was clearly tripped by Southampton keeper McCarthy. The young Englishman, to his credit, attempted to climb back to his feet to finish the chance but failed to do so as his momentum was lost due to the foul. Referee Jonathan Moss for some reason didn’t award the penalty, and VAR refused to suggest an overturn as they couldn’t be sure McCarthy didn’t touch the ball so stayed with Moss’ on-field decision.

Mahrez then stepped up to make sure VAR didn’t affect the final result. The Algerian pounced on a loose Che Adams pass and finished with aplomb to put City back ahead before his excellent work in the box set up Ilkay Gundogan, who put the game out of reach before half-time. Mahrez was sparkling, turning the Saints back-line inside out before hitting his shot against the post, with Gundogan following in.

After the break the Mahrez show continued. He got hold of the ball just outside the area and, although he was surrounded by red shirts, he weaved his way into some space before finishing beautifully with that trusty left foot. He may just have the best left peg in the division. A minute later, Adams made up for his first-half error by pouncing on a City mistake to fire home and give the visitors hope once again.

Mahrez was withdrawn to save his legs as well as Saints’ blushes and would’ve got a standing ovation had there been any fans in attendance. Foden and De Bruyne, who were a joy to watch in the City midfield, combined for the fifth goal as City recovered from their derby loss with ease. Four trophies are still a realistic possibility for this side, and if they are to end this season with an admirable trophy haul, Mahrez’s magical left foot will be key. He’s a joy to watch.