Football
News
Newcastle United looked more like the team with Champions League football to play for at St James' Park
Joey Mills
21:54, 16 May 2022

Champions League qualification is no longer in Arsenal’s hands, after suffering a 2-0 defeat to Newcastle United at St James’ Park. The Gunners find themselves behind Tottenham Hotspur going into the final day. Their North London rivals are 13 points better off in terms of goal difference, meaning that even a draw for Spurs would likely confine Arsenal to a place in the Europa League.

You might have struggled to pick out the team chasing a Champions League spot based on the first half. While Arsenal had the look of a deer staring down rapidly-approaching headlights, The Magpies played with pace, verve and ambition.

An early Fabian Schar pass was brought down expertly by Matt Targett, who knocked the ball through the legs of the beleaguered Takehiro Tomiyasu. His cross saw an offside given, but the rapid and direct passage of play exposed Arsenal frailties that would recur throughout the first period.

Aaron Ramsdale’s uneasy touch nearly gifted a goal to Miguel Almiron, as the Gunners wobbled. Tomiyasu found himself under heavy fire, with Allan Saint-Maximin, Joelinton and Callum Wilson all targeting the right-back. Saint-Maximin went round him and then cut inside to fashion Newcastle’s best chance of the opening 45 minutes. The winger fired his shot towards the near post, and Ramsdale regained his composure to save brilliantly.

The story of the first half is perhaps best summed up by the fact Newcastle had 69% of the possession. To put that number into context, the Magpies sat bottom of the table for possession in the Premier League going into the game. They had averaged just 39.1% so far this season. If Arsenal were to keep their top-four bid on track, drastic improvements were needed.

Sky Sports Premier League
@SkySportsPL
"A DAGGER TO THE HEART OF ARSENAL, A HUGE BOOST FOR TOTTENHAM HOTSPUR"
Newcastle take the lead at St James' Park!! 👊💥 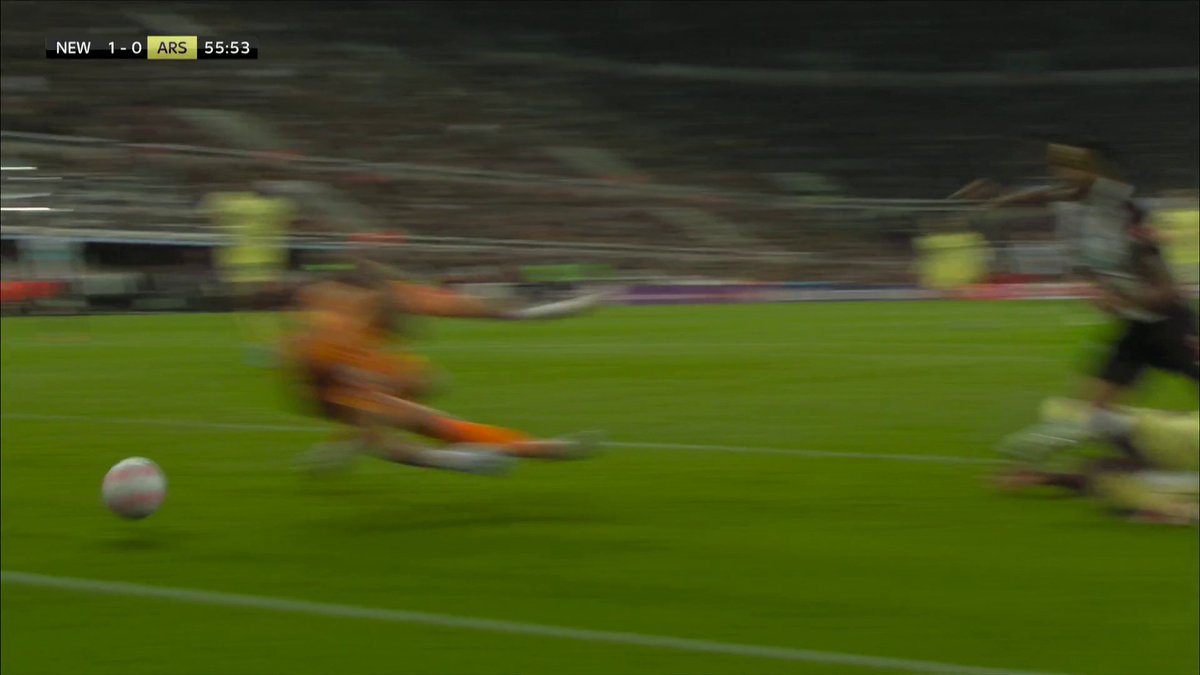 The second half had barely begun before Eddie Nketiah clashed with Fabian Schar in an aerial challenge. The Newcastle defender went down and landed heavily with his head striking the pitch. His teammates immediately drew the attention of the referee, as Schar appeared to lose consciousness. Nketiah was booked for the challenge, and thankfully Schar was able to leave the field under his own power. Jamal Lascelles came on to replace him, with the switch counting as a concussion substitution.

A driving run down the left flank from Joelinton left Arsenal scrambling, and a well-placed cross found Callum Wilson. The ex-Bournemouth forward stuck it away, with the ball hitting Ben White on the way in. Wilson didn’t get the goal on the official record, but his contribution was invaluable in giving Newcastle a well-deserved lead.

Wilson almost got a goal to call his own when Bruno Guimaraes fired in an enticing cross. The striker hit his volleyed strike well, but Ramsdale proved equal to it. Joelinton lashed over from distance moments later, as Newcastle attacked with confidence.

Arteta summoned attackers from his bench, with Gabriel Martinelli coming on just before the goal and Alexandre Lacazette and Nicholas Pepe joining him after. But still it was Newcastle who had the impetus. This Gunners side has the youngest average age in the Premier League, and these promising but raw talents lacked the guile to trouble their hosts.

A well-worked break saw Jacob Murphy presented with an excellent chance to make it 2-0. He wavered though, and Ramsdale was able to beat away his effort. Wilson nearly caused St James’ Park to come completely unglued when he tried his luck from distance with a superb effort. The ball swept just wide, but that did not stop the Geordie nation singing his name.

A second Newcastle goal had felt inevitable for a good while, and it finally arrived through Guimaraes. Wilson drew a save from Ramsdale via a one-on-one, and while the goalkeeper was indisposed, the January signing slammed the ball home to double the Magpies’ lead.

Arteta had won every single one of his 11 games against tonight’s opponents as an Arsenal player and manager. He has lost perhaps the most costly one of all. The top four race will go down to the final day, but Arsenal fans must now pray the already-relegated Norwich City can beat Spurs. Being as fair as possible to Dean Smith’s side, such a result feels unlikely.

Arsenal will be facing an Everton side battling the drop themselves, and Frank Lampard’s men may go into the final day needing a result to survive, depending on how they fare at home to Crystal Palace on Thursday. Arteta would have given anything to avoid this outcome, but he must now concede that there is very little he can do except beat Everton and hope for the best.